Here is another 360-degree image I made recently in Stockholm. In this view from Slussen, you can see Gamla Stan (the old town) across the water, the circular Berg Arkitektkontor (Berg Architecture office) building, and Gondolen, a tall elevator-and-bridge observation structure.

Slussen is a central point in the city. It is the location of one of the live webcams in the left-hand column on this site. From that camera’s position on the Gondolen, you can look down on the position where this 360° view was made. The yellow Hilton Hotel is in the left side of both views, and the satellite view below shows these landmarks specifically. 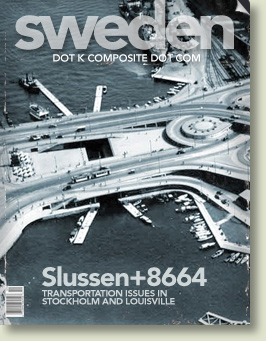 The greater Slussen site is a major junction that has been built upon for decades to accommodate the growing traffic demands of all the cars, trains, boats, bicycles, buses, and pedestrians who use it daily.

It’s one of those types of places where you can feel that there was never a master plan. Things are randomly arranged in a confusing fashion. Some areas seem closed until a car comes through and surprises you. When you’re crossing one of the streets there, it’s sometimes not clear which direction you should look to watch for traffic. The current version of the site is nearly 100 years old and is in dire need of repair. This black and white image is how it looked in 1935 and at first glance it seems not much has changed since then. Today, the complex includes twenty-four bridges.

Its central location makes it a popular meet-up spot, not least because five of the seven subway lines pass through every few minutes. Underneath the streets, where you can walk to the Tunnelbana station or visit some underground shops, much of the concrete is old and crumbling. While it probably seemed like a futuristic nexus in the 1930’s, it’s quite primitive by today’s standards. 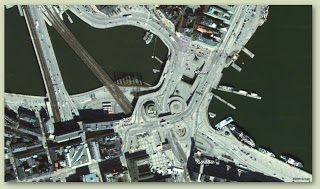 The whole scene down there is oddly out of place in this otherwise clean and organized city. You can see some of its deterioration if you look at the handrails and concrete infrastructure in the detailed 360° image.

In the next few years, Slussen will be completely rebuilt and modernized. Through a massive reconstruction project, the new plan will open up much more public space and access to the water. A victim of this renovation will be the Debaser Slussen nightclub which sits under all of it adjacent to the boat locks. The area where Debaser sits seems like it will completely disappear in order to accomplish the new vision. The circular Berg building in the center, truly a landmark, will also vanish. 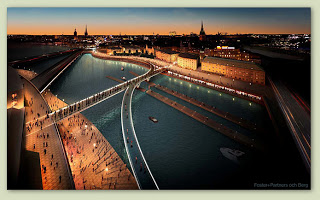 This picture from the Dagens Nyheter (“Daily News”) newspaper website shows a rendering of the new Slussen. It’s much more sleek and open.

I know many Stockholmers have a lot of sentimental attachment to the Berg building, Debaser, and the general familiarity of Slussen. Understandably, some people are freaking out about the changes, but it seems that the area is falling apart so something must be done. It’s nice that the opportunity is being taken to do something truly forward-looking that embraces the water and enhances the public space.

Here is an overview on the Stockholm City website of the challenges involved the project, which includes several pictures truly worth a thousand words. 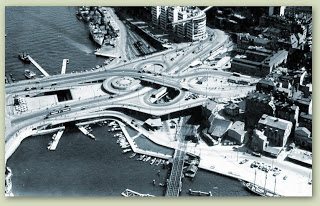 The Slussen controversy reminds me a bit of the 8664 debate that has been going on for a few years in Louisville. Some businessmen and activists (supported by more than 10,000 members of the public) are pushing to stop the expansion of downtown highways to an absurd 23 lanes.

The alternative plan they are advocating would route thru-traffic around the city and replace the giant, elevated highway with a ground-level, tree-lined waterfront parkway. Aside from reconnecting the city to its riverfront, it would also save billions of taxpayer dollars. Naturally, the higher-ups aren’t listening.

With driving rates continuing to decline, it only seems comical to continue building monstrous automobile infrastructure. I’m continually returning to the idea what kind of public transit a couple billion dollars could buy for Louisville, instead of the proposed 23-lane monument to yesterday’s sad love affair with the internal combustion engine.

The image you see here is not an exaggeration by the opposition, it is from the actual Ohio River Bridges Project website. It’s really quite shocking how the project absolutely dwarfs entire city blocks of houses and businesses, and is placed directly between the city and its waterfront. If you’re having any trouble imagining the size of this monster, compare it to the baseball stadium in the bottom left of the picture.

If everything goes according to plan – which construction ventures never do – the project will be finished in fifteen years. When you think about what has happened to oil prices, driving trends, and auto manufacturing, just in the last two or three years, a fifteen-year project like this is nothing short of senseless, foolish, and wasteful. It is a prefect example of doing more of the same thing and expecting different results. 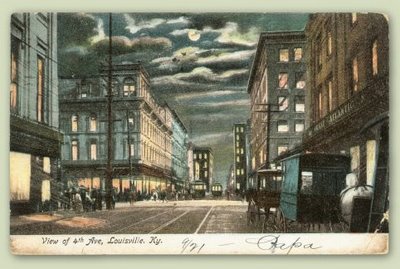 Stockholm, a city roughly the same size as Louisville, is literally blanketed in a web of public transit. This access grew out of investment and planning dating back to the 1940’s, when Louisville was foolishly dismantling its electric street cars. The result today in Stockholm is a beautiful city that is drastically quieter, cleaner, and more accessible to everyone than Louisville is. In my several months here I have been inside a car only a handful of times. Buses, bicycles, pedestrians – they all coexist in the same space and breathe the same air.

Just like Louisville, Stockholm was originally founded because it was a natural stopping point for shipping. The boats had to stop here and therefore a community grew around that pause in the transport of goods. Sure, Stockholm is more than half a millennium older than Louisville, but that should make its lessons of modern growth more of an example than not. Despite the age difference, the two cities share a lot of parallels and similar challenges when it comes to transit – namely, a similar population, surface area, high water table, commuter culture. 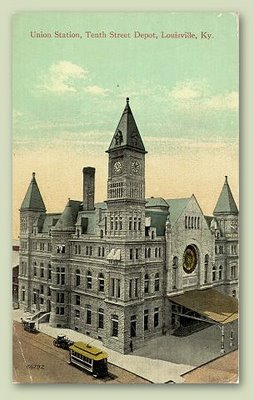 The difference is that in Stockholm they made tough choices for the greater good. They moved their air traffic away from the city instead of continuing to expand an old airport in the middle of where everyone lives. They built an extensive underground rail system which meant carving deep into the bedrock below lakes and rivers.

Both of these things happened more than sixty years ago and neither was cheap, but in the long run, they were ultimately worth it. They required sacrifices but they became gifts to future generations that people today are enjoying.

With all the investment UPS has put into the Louisville airport and the city’s cost of buying out homeowners to expand it, they really should have built an entirely new airport somewhere else. Jumbo jets regularly flying a few hundred feet over houses and schools is insane, not just because of the noise, but because of the danger. It only takes one accident to ruin a neighborhood and scar a generation of life in the city. In the same respect, individuals driving alone in their cars from the east end of the city to their jobs downtown is doing nothing but slowly burning up the planet and filling the local air with noise and toxins. There is plenty of land in surrounding counties for a truly international airport and plenty of daily mass commuting in and out of the city to support collective transit.

If you build it, they will come, you just have to make the tough choices and understand that you can’t please everybody. Lincoln wasn’t popular and the Kennedys certainly weren’t overwhelmed with love, but we don’t remember the popular guys as being anything but popular. We remember the guys who had a vision, the ability to get us to see it, and help them remake things for the better. In a 200-year old city, it may be difficult to see 100 years into the future, but you must do that.

I miss a lot of things about Louisville, but I certainly don’t miss the noise level, the exhaust, the need to drive or the cost of driving. Louisvillians think of the city as clean, quiet, and easy to get around. By American standards, that’s pretty true, but you really haven’t seen anything like Stockholm.

In Louisville, you always hear a motorcycle, an airplane, a siren. When I hear one of those things in Stockolm, I notice it as unusual. I feel like even if I live another fifty years, it may not be long enough to enjoy this in my own hometown. 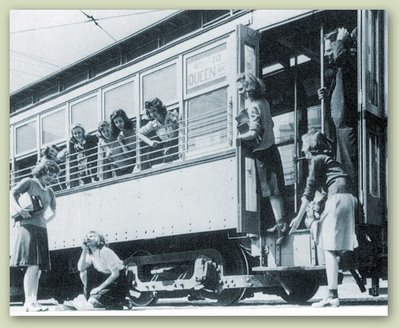 A Picture of a Boat