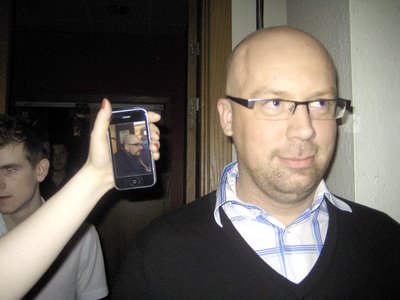 This is a photo of a guy we ran into on March 4th who looks like he could be my brother’s stunt double. On the left you can see Iida’s hand holding a photo of the real QB. 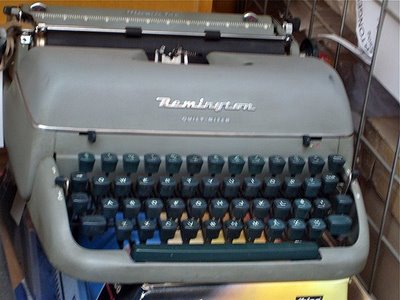 I saw this typewriter in a shop window. When I was a little boy, my mom had the exact same Remington Quiet-Riter. When I began publishing my own magazine in the neighborhood in the early eighties, that’s what I used, along with scratch-on letters.

When I saw this one in the window, I was kind of hoping it had unusual keys on it for Swedish characters, but this one appears to be just like the one we had in Kentucky. I do remember that the one in our house had a hard suitcase-style carrier that was fuzzy and green on the inside. A Google Image search turned up one like that: link. I remember taking it out of the case, taking the ribbon out, and generally disassembling it. I had a bad habit of that when I was a kid.

After a few years of printing my first magazine, Cosmicpolitain, the folks took me to Service Merchandise on Shelbyville Road and I upgraded to a “modern” electric Olivetti typewriter. That one used cartridges instead of ribbons and had the amazing delete function which made Liquid Paper obsolete! I mean, obsolete for correcting errors. It was still useful for painting names of punk bands on stuff… and it smelled great! 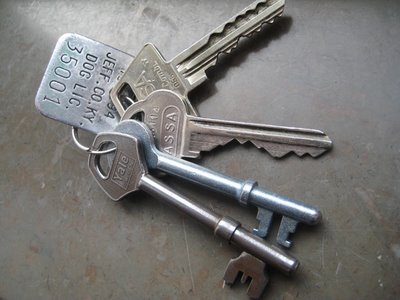 Since our doggie Barney died back in 1994, I have had his Jefferson County dog license tag on my keychain. I’m happy to report that it made the trip with me and is now among my Swedish keys. Many of the keys here look like they are from haunted houses, again, presumably because Swedish people are vampires. 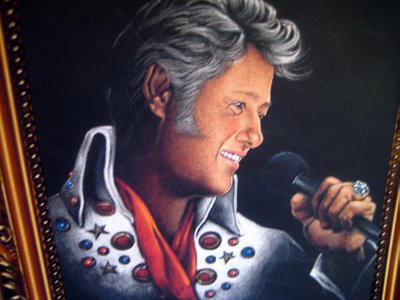 I riled up some religious types a few years ago when I launched a website called SaintClinton.com and started selling merchandise with a hybrid image of Bill Clinton crossed with Jesus. I received so much hilarious hate mail that I put together a book of the best ones.

I saw a book in a store here that had a similar idea on the cover that is not as offensive to Christians, but I think the illustration is much better and funnier than what I did. Here’s Bill Clinton crossed with Elvis Presley. Awesome… and not that much of a stretch, really. I heard a comedian say once that when he was working on his Bill Clinton impersonation, he just ended up trying to do Jimmy Carter and Elvis at the same time. It think that’s about the size of it!

Sweden: not so far away after all