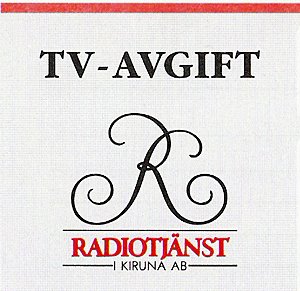 In Sweden, there is a television and radio tax which supplies funding for the state-run SVT television networks and SR radio networks. In order to pay for the regulation of the airwaves and the operation of the networks, everyone who owns a television must pay a tax which is about $250 a year (roughly 2000 kr).

These networks are like PBS and NPR on steroids: five different television networks and more than forty streams of radio programming. They include services like PBS and NPR – news, documentaries, and children’s programming – but they also have comedies, movies, reality shows, dramatic series, et cetera. Of course, Sweden has a multitude of commercially-operated television and radio stations as well.

Both SVT and SR have services that I use regularly that other stations don’t offer. Sveriges Radio runs a daily 10-minute program called “Klartext” which is the day’s news in simple, clear Swedish. This is available as free podcast through iTunes and I used to listen to it every night in Louisville when going to sleep. On television, most SVT programs have the option of onscreen text, like Closed Captioning in America. Both of these services are helpful for anyone learning the Swedish language because pronunciation and dialects are difficult to get used to. When you hear the language spoken, it is sometimes not how you would expect it to sound from the way it is written. On paper, my Swedish comprehension is way farther along than where it is with the spoken language. My pronunciation is evidently still quite hilarious. Fy fan! 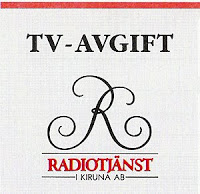 Anyway, I had heard tale of this mysterious TV tax, and sure enough, Wednesday evening the TV and radio tax man came to the door in HÃ¤gsatra. My roommate Sander wasn’t home, so I just took the paperwork and acted like I didn’t know anything about it. By law, the man collecting the tax is not permitted to enter your home or apartment. You can just tell him you don’t have a television and he is not allowed to look around to see if that’s true or not. I get the impression that most people aren’t so dishonest, again surprising, since Americans are always busy perfecting the art of the scam. However, I also heard that the TV man only comes to your house if you don’t pay the bill they send in the mail. If that’s the case, nobody in our building is sending it in voluntarily.

When I was at the Kristofer ÃstrÃ¶m show, my phone started ringing. As soon as I saw Sander’s name on the phone, I knew it was about the TV tax. I knew he was probably freaking out because he thought we were going to have to pay the tax. Sure enough, when I arrived home later, he was bouncing off the walls. He had unplugged the television and hidden in the closet.

I told him that the TV tax man was very persistent (which he wasn’t) and that I said we had three televisions (which we don’t). Anyway, the tax is per viewing residence, not per television set. Eventually, after I could see that Sander’s head was going to explode, I told him the truth.