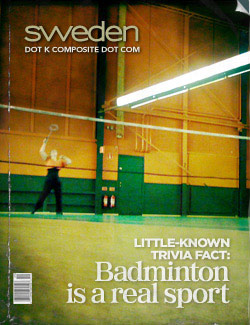 Am I the only one who is uncomfortable around naked old men? Oh, everybody is? Cool. That’s what I thought.

Nonchalant coexistence with naked men in places like public showers may be a rite of passage among Europeans, but my American roots – with all the faux-Puritanism instilled therein – are simply not prepared for it.

Shit, honestly, I’ve never really been comfortable in a room full of naked women (you know, like in a so-called “gentlemen’s club”).

Of course, I can only imagine what that must be like. Being a true gentleman, I have certainly never patronized any establishment of such ill repute. Especially not on New Year’s Eve 2006. And I certainly wouldn’t know the names of any of the entertainers, like Jade, for example. You’re barking up the wrong tree with me, mister.

All that aside, I was invited by my Swedish friends Iida and Erik to play badminton on a recent Sunday afternoon. This was during October when it wasn’t yet freezin’-ass cold outside. I expected that we’d set up a net or just hang somewhere outside and hit the little birdie around.

That’s not how they roll here. Oh me. So naïve to the ways of the Swedes.

After gathering some racquets, towels and supplies at the apartment, then taking a train, then a bus, we ended up at a huge badminton facility in Stockholm.

It was news to me that a huge badminton facility existed on this planet. Neptune? Maybe. But this planet? I had no idea.

The place had no less than thirty professional, full-size badminton courts available for hourly rentals. These courts are reserved days or weeks in advance, and when we arrived, the building was packed and bustling with at least a dozen matches already underway. In fact, at the turn of the hour, most courts had a new group of people waiting for the switch-out.

While it seemed that a lot of people were there to have fun or get some exercise, some of these turkeys were super serious about badminton. By “super serious” I mean deathly serious.

These people were athletes – assuming stances, wearing game faces, playing intensely, hitting with accuracy and ferocity, and getting genuinely upset when they didn’t execute every maneuver perfectly. Others were so serious that they were doing a half hour of drills and grueling reps (“reps” – that’s sports talk) before the games even began. There was even a Biggest-Loser-Bob-style coach shouting instructions and encouragement at a team of aspiring mintonites (“mintonites” – that’s a made-up word).

For someone like myself, who doesn’t get much exercise and only wears non-full-length britches (“shorts”) for the purposes of swimming or sleeping, an hour of organized, indoor badminton is a lot of work. Nevertheless, it was a lot of fun.

It was one of those moments (like watching The Pacific on HBO) that makes you realize what a generation of mouse-pushing pussies we all have become. Sitting in tropical rain for a month with a thousand other assholes, eating cold food out of cans, waiting to go into indefinite combat against an insane enemy whose troops are best known for trying to kill you at all costs (believing that dying in the process is an honor). No thank you. I have no need to test my mettle that way. An hour of badminton has already successfully located my so-called mettle.

By now, I’m sure you’re wondering when everyone in the story will be getting naked. (“Seriously, dude, where are all them naked men you teased us with in the intro?”) I understand that concern and I’ll get to it. Now.

Okay, so after everyone plays badminton, there are these public showers that are like, well, public showers. I gotta say that there are times when I’m not completely comfortable in a shower when I’m by myself. I mean, there are usually other people in the next room and, well, I’m like totes nekkid. Don’t get me wrong, I like being clean, but I find washing my person to be an intensely intimate matter. I wouldn’t invite anyone to join me unless… well, shit, unless I had at least had met them before. There are other prerequisites as well.

In any event, through ignoring my surroundings and looking at the floor a lot, I survived the public showers at this badminton arena, then made my way to the next Scandinavian rite of passage: the sauna.

Nordic people “taking a sauna” is almost as stereotypical as Irish people “tossing back a few pints” or Germans “making some party.” However, despite being in my second year in Sweden, I had not yet indulged in the local sauna custom.


Let’s pause for a minute. Sorry. I just have to acknowledge that I realize the proper name for the badminton birdie is “shuttlecock” and there are literally dozens of jokes I could be making about that word, naked men in the sauna, and more men in the main hall whacking it across the room for each other, trying to beat their friends off the scoreboard… HOWEVER, this is a very high-class website and I would hate to denigrate its reputation as a repository for respectable, scholarly articles. So let this sentence be the last in which the words “cock” and “whack” will appear.

If you’ve ever been… Cock! … Sorry. If you’ve ever been in a sauna in America, you know that the most offensive thing you could possibly see is manboobs. Why, I’m feeling a bit queasy myself, just thinking about such a hairy sight. I must warn you, dear reader, that sheltered North Americans have truly seen nothing compared to what awaits in a genuine Scandinavian sauna. Let’s just say I kept my towel on and my eyes down. Not every other gentleman was so courteous.

It’s really kind of a trade-off. The sauna feels great and you totally get the sensation that both weight and toxins are sweating out of your body, but any comfort that the steam brings you is countered by the unease of not being able to look anywhere but down. And inevitably there is always going to be someone in there who wants to talk. Ridiculous. Swedes never talk – not in the train, not on the street – so why are they suddenly so loquacious when they’re naked?


My Swedish isn’t perfect when I’m relaxed and willing to be chatty, but get me in a sweatbox with a bunch of naked creeps and it really deteriorates quickly. My only real observation was that Japanese men are much more fearsome in South Pacific combat scenarios than they are in Swedish saunas.

I’ve gotten a bit off track with this story, but what I meant to say was that some Swedish people are really serious about badminton – which I’ve learned is a lot of fun and not just played without rules at barbecues – and that Americans are uncomfortable being naked, but Swedish people seem to dig it. And the showers: what’s so wrong with a curtain? I have it on good authority that there’s an Ikea near here. Y’all need me to pick up some drapes for ya? I can do that. My gift to Sweden.

Okay. Good talk. See ya out there.