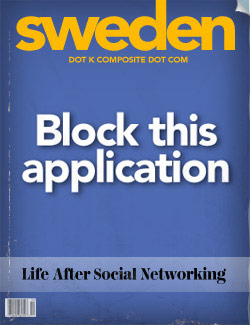 I recently deleted my Facebook account. Although it occurred to little or no fanfare, it was a long time coming.

Facebook was a nice way to stay in touch with people near and far, especially given that my life has been spread across two continents in recent years. But the site ultimately became more of a burden than a joy. It seemed every login in was followed by a marathon of clicking “ignore” to a dozen different requests.

Who is this person? Why do they want to be my friend? How is it possible that I don’t know, since we have 67 common friends?

Bill Gates acknowledged in the New York Times that he once had a Facebook account, “but every day ‘ten thousand people tried to be my friend.’ He said he spent too much time trying to decide ‘Do I know them? Don’t I know them?’ Ultimately, he said, ‘I had to give it up.” Amen, Four-eyes.

That megarich supernerd was right. The number of daily requests wasn’t ten thousand for me, but it was enough to contribute to the overall feeling that Facebook was more of an imposition than a convenience.

Several months ago, before I escaped the whole thing, I tried to establish some boundaries on Facebook. By grouping my “friends” into categories, then limiting access to particular parts of my profile based on those groups, I hoped to customize my experience in the site into something tolerable – to make it what I wanted it to be.

For instance, my contacts in the “Actual Friends” category could see everything on my profile, whereas my contacts in the “People I Know” group had limited access. Still another group called “X” included people I had met only once or were business connections. You know, people it may be nice to stay in touch with but also people who I don’t want up in my personal business.

Before this, I had already been limiting my own access to excessive or annoying updates by hiding other people’s updates from my view. This happened on an ad-hoc basis whenever someone bothered me or wasted the space. Pictures of your baby? Hide. … Three updates in an hour? Hide. … Constant nonsense about Lost, True Blood or Twitter? Hide.

After a few months of limiting access and grouping people into boundary-specific sets, it turned out that much of the problem wasn’t with all these people. The problem was with me. 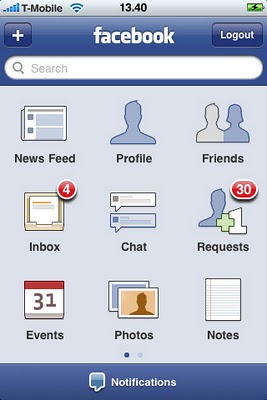 I was simply not adapting well to the idea of all these people being mixed together nor my new role of patrolling and maintenance.

I had this same adverse reaction to my first cell phone sometime in the mid-90’s. In a technological homage to Muhammad Ali, I threw my cell phone out the window of my car while crossing the Ohio River on the Clark Memorial Bridge. (I know, I know, that story about Ali throwing his gold medal off the same bridge isn’t really true, but it seemed like an apropos watery grave for such invasive devices.)

In so many words, the Internet has really screwed up how people interact with each other. While it has made people much easier to find it has also made people harder to lose.

In place of letter writing which used to take days – or even phone calls which were natural conversations – Internet communications are delivered in a second. As soon as something is sent it is delivered. There is no pause between sealing the envelope and waiting for the reply. And on a site like Facebook, many of these personal notes and interactions are on public display. (Maybe people felt the same way when mail delivery began on trains insead of horses, or when the first public announcement kiosk was put in a town center.)

It is also entirely possible to build an online relationship that doesn’t actually exist in real life, or at least one that doesn’t translate when it goes face-to-face. People have different personas online than they do in person. People say different things online and the way they say them is open to more interpretation, not only from the recipient but from a wider audience of associated people.

Perhaps most importantly, everyone is on Facebook for a different reason. Each person brings their own ideas and expectations of how people should behave when they join the site.

Do I really want to be “friends” with someone I went to middle school with and haven’t seen since? Do I need to be in contact with everyone I meet on tour? Do I give a shit if someone I worked ten years ago with just refinished their deck? Do I want to see pictures of their bratty kids with chocolate on their faces? Do I need all the negative energy in my life of constantly having to say “no” to people?

If someone adds me and that person’s reasons for being on the site are different than mine, it opens up a whole can of worms and explanations. Before all this, we could have just been two people who peripherally knew each other and said hello when we happened to meet. Now, if I say “no” I feel bad and the other person feels offended. If I say “yes” out of guilt, then I feel like I’ve been coerced into doing something I didn’t want to do, and the other person might feel like we’re actually friends. Jesus, who even knows what the other person thinks?

As my actual, real-life friend Bob said, there’s no way to know what’s in the unwritten social contract that any particular person has with you when they add you as a friend.

Therein lies one of the biggest pitfalls of this kind of networking: use of the word “friend” rather than “contact” or “connection.” Truthfully, that’s what most of these people really are.

Being a member of a social networking site introduces and entirely new set of questions and decisions into your life. It makes a lot of identical information about you available to your friends, your peripheral acquaintences, your significant other, your business contacts, hell, sometimes even your parents or your exes. The fact is that I have distinctly different relationships with all those people. I have a different and unique dynamic with everyone I know. To think that all those people should be privy to the same forum is absurd and inherently unnatural.

The ease with which people have become comfortable divulging and sharing personal information is alarming. Not me. I will thank you to mind your own affairs, sir.

The average person doesn’t have more than a handful of true friends. I know for sure that a very tiny percentage of the hundreds of “friends” I had on Facebook are actually people that I could comfortably go out to eat with.

Perhaps that’s the way it should stay. I still have a phone, an email address, a mailbox and a face. Those always worked for me before. Maybe I’ll have a change of heart at some point, but for now, Facebook is not for me.