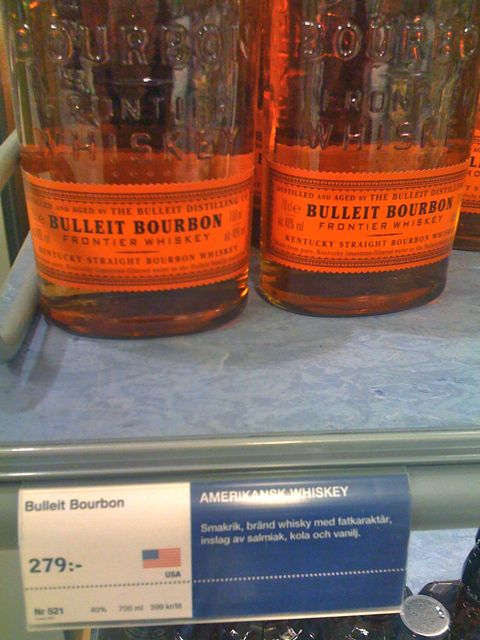 Bulleit for sale at Systembolaget which is the state-owned liquor monopoly. The price is 279 kronor (about $35) and it says, “Tasty, burned whiskey with barrel character, elements of liquorice, caramel and vanilla.”

It’s actually cheaper than Maker’s and Jack Daniel’s. Of the seven whiskeys Systembolget carries, four are Kentucky bourbons. Noice! I haven’t splurged yet. I may save it until May when Sammy and Alex are coming up from Germany for Derby Day!

Systembolaget locations are the only liquor stores in the country. It’s a non-profit operation owned by the government and the products are taxed based on their alcohol content; so bourbon, vodka, and things like that are expensive while beer is affordable, but they’re only sold as single bottles. You can’t buy a “case” of beer, just a bunch of singles. They close at 6 every day and are closed Sundays. On Fridays you’ll see everyone in the city and on the trains carrying their green and purple bags of alcohol. Some of the locations have an amazing selection (each shop is a little different).

Because Systembolaget is buying alcohol for the entire country, they are one of the biggest purchasers or alcohol in the world, so some of the prices are quite good. I’ve seen a few good and rare beers that we paid $7 or $8 for at Rich O’s going for around $2 or $3 there.