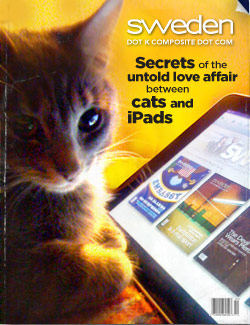 A couple months ago, I started working at an awesome job with a magazine publishing company in Stockholm. The company is a huge, family-run, Swedish media empire, built over many generations. Let’s say it’s kind of like the Bingham family was in Louisville or the Hearst family in America. But much, much older.

At the office, I am a member of a stealth, futuristic team which converts print magazines into fluid, moving, living versions, to be read on Apple’s iPad. The office walls are white, the windows are big, the desks are made of natural wood, and there’s virtually no paper to be seen.

Most people expect magazines on tablet devices to be like flipping through a PDF of the print version. This couldn’t be further from the truth, at least for the ones we’re making.

These magazines on the iPad have all the beauty of full-page magazine layouts, but with the added magic of designs that move on multiple layers. Think of the newspapers in the Harry Potter movies – how they look like a regular newspaper but the pictures are alive and you can interact with them when you want to. That’s where it starts.

(Of course, I’m a grown man, so I’ve never seen any of the Harry Potter movies nor read any of the books. I’m just going by what people have told me. I have certainly never dated a girl who drove a car with Harry Potter license plates or had an awesome dog named Potter. I don’t know the first thing about Miss Granger or the Weasley brothers. Honestly, I’m not even sure what everyone’s fascination is with those dirty little wizards.)

Compared with traditional print magazines (which can be both engaging and hefty) and website versions of the same content (which can be both annoying and forgettable), the iPad represents a wonderful new incarnation for the magazine reading experience.

This is the cutting edge of publishing and you really can’t appreciate it until you see it in action or use it yourself. You really need to drop what you’re doing right now and go buy an iPad so you can finish reading this article on it.

Any time a groundbreaking piece of new technology finds its way to market, the media is abuzz with excitement and analysis about how it could change people’s lives.

What receives significantly less attention – from both the media and the developers who came up with this new gadget – is the question of how such new advancements will affect cats.

If you have ever been in the company of a cat and you tried to sprawl a newspaper out across the floor or use a laptop computer, you are no doubt aware that these two activities have long been deemed as incompatible with the cat world.

Cats view activities like reading and typing as supreme wastes of valuable time which could be better spent petting them or, frankly, doing pretty much anything else. Simply put, cats don’t understand reading and typing.

In their defense, however, if you have never taken a nap on a newspaper, or walked on your computer, you’re doing yourself a grave injustice. It actually is really fun. And if someone is also trying to use the newspaper or computer while you’re doing it, they’ll just have a devil of a time trying to ignore you.

You’ll be treated to a generous dose of what many cats crave more than rubber bands or plastic bottle safety rings – attention.

As much as cats are confused by reading, a lot of people are also dumbfounded by much of the new technology we’re being bombarded with. Researchers call these people “old.” I know all about it. I’m still trying to find the slash, the brackets, the “at” symbol and the dollar sign on my Swedish keyboard.

So if 21st Century technology seems daunting to you, keep in mind that for cats it’s the 63rd Century. You know, because of “cat years” and all. 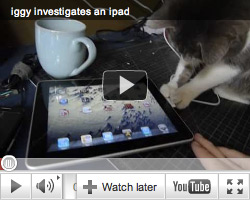 Knowing that, if we roll back the clock many centuries, to the days of ancient Egypt – the people then were about as smart as the cats are today – even then, mankind had long recognized that cats are really, really stupid.

That ignorance, combined with softness and cuddliness, are some of the main reasons why people like them cats (and ancient Egyptians).

Cats have much of the same appeal as the popular and pretty girls in your ninth-grade class. They seem to never learn anything and yet they are constantly coddled and fawned over. The smart kids just can’t catch a break at Hogwarts. I mean, school.

As compared with the cats who found their way into illustrations by ancient Egyptians – it has been said that the question mark itself was derived from the quizzical shape of a cat’s curling tail – just like us people, today’s cats have a lot more to process in their little heads.

There were no such wonders as televisions or whistling tea kettles in the days of King Tut. Just table scraps and dirt floors. Shit, they were still centuries away from high-tech advances like windows with glass in them and housing which accommodated sanitized ways of pooping indoors without that stank. Some accounts have King Tut himself undergoing a quite modest and primitive entombment, in fact, being buried in his jammies.

Whereas monkeys and even common hillbillies have some depth that includes longterm memories and basic emotions, the knowledge capacity that cats work with is stored inside of what scientists can best describe as “a tiny, cat-sized brain.” (their words, not mine)

Despite this lack of knowledge, these little fuckers are endlessly curious – something that’s true of both cats and scientists.

Researchers describe the so-called “cat’s brain” as a “cute, little bundle of two or three firing electrons.” While that may not seem to be a lot of activity, it is important to remember that those few electrons each fire up to 50 billion times a second. Squared. To the 15th power. Or more.

If you’ve ever wondered what’s going on in a cat’s head – what makes them assault the same piece of yarn for two hours, or never tire of chasing the laser pointer which obviously is a projection and ends up on top of their paws every time they try to smash it (fucking idiots!) – if you’ve ever reeeally wondered what’s going on up there in that furry little head, the answer is “practically nothing.”

Dr. Frank Davidson, one of America’s leading pussy researchers, says, “Cats are so wildly entertaining for precisely this reason. Inside their wee noggins, next to nothing is transpiring. However, that absence of activity is happening about 27,000 times every second. Their shit is quite lit’rally poppin’ off like crazy.” Bloke speaks with a Bri’ish accent to make himself seem smar’er.

Dr. Davidson’s colleague at Southern Miami University, whose name is also Dr. Frank Davidson, has helped Davidson every step of the way during six years of research into the mysterious mind of the cat.

Much of their investigation centered around viewing the “Treadmill Kittens” video numerous times, in varying states of getting baked.

During their third year intensive experimentation and inquiry, they had what they describe as “a watershed moment.” That’s when they discovered that the word “feline” also refers to cats.

However, that was small potatoes compared to what they’ve been up to lately. The doctors brim with grimalkin enthusiasm when asked about the newest and most revelatory findings.

Dr. Davidson (the second one) explains that contrary to popular belief, their latest research suggests that cats don’t actually have nine lives at all. Rather, cats’ brains are working so quickly “they are actually living the same life nine times simultaneously.” This is why they often eat so fast that they puke all over the place. They think they have to finish eating nine meals before they get full.

Despite not yet being circulated, the doctors’ controversial findings have already been met with considerable skepticism. Their full report is sure to garner even more debate when it is  published in next week’s issue of “Miniature Horse Enthusiast.”

“For any normal creature, having nine lives would be an invaluable way to learn how to make each one last longer or have a higher quality than the previous. A learning curve, if you will. But cats waste all nine of ’em in pretty quick succession.”

(As a side note, the two Dr. Frank Davidsons are not related. This can be a bit unnerving, since they have the same name and they look identical. Their fellow researchers claim to have never seen the two men at the same time, however, a grad student who works in their lab, whose name is also Frank Davidson, says the older one wears glasses and the younger one works second shift.)

(As another side note, despite not being related, the two Dr. Davidsons are the same age and were born on the same day, from the same mother, but in different hospitals. The elder Dr. Davidson was born at St. Anthony’s Hospital in Orlando, while the younger was born at Saint Anthony’s near Orlando.)

A landmark study by Phil Connors, a television weatherman in Punxsutawney, Pennsylvania, established this theory as the Groundhog Day Effect in 1993.

But Davidson adds that even if a cat has seen that movie four or five times during six or seven of their lives, “they wouldn’t remember it any more than they remember the fact that, even after you’ve pushed it away a million times, you still don’t want their ass in your face when you’re petting them.”

“Halfway through Life #7, our feline friends seem to have just as little respect for gravity as they did in Life #2. And just as little awareness that gravity actually exists.”

While cats may be fascinated by bright, shiny, technical objects, such as the iPad or random high-definition programming on the Animal Planet network, less animated objects don’t hold the same allure. Studies have shown that even though it seems they don’t respect newspapers or books, they are entirely oblivious to the idea that some clothes are black.

Just as often as they forget that you don’t like their ass in your face, sometimes it’s almost like these li’l rascals have never even seen a spray bottle before. (What is it with these guys? How many fucking lint rollers do we have to buy this month?)

The cats in this laboratory video, for example, appear to believe that the objects displayed on the iPad’s screen are actually under the iPad. Wake up, dummy! It’s a computer!

As far as what cats actually can understand and remember, Davidson (the grad student) says, “Cats have very selective memories and they usually tend to remember just one thing: what feels good. They simply adore making biscuits and gettin’ some knucks.”

“Making biscuits” is a scientific term for the paw-kneading motion cats like to do over and over on soft pillows or your fat-ass belly. “Knucks” are the insane addiction cats have for forcibly rubbing their jaws on things.

Many cats will rub their teeth on your knuckles if you make a fist. Davidson (the one born at Saint Anthony’s) says, “It feels amazing. If you’re a cat is like crack cocaine.”

Does it ever. (Not that I’ve tried crack.)

Samsung phones before and after iPhone