In your face, Thomas Edison!

The man who perfected and commercialized the incandescent light bulb would be aghast if he were here today. With the rest of us, he would be seeing his bright, warm glow being dismantled all over the world, and replaced with buzzing, pale blue tubes that make people’s skin look as dead as his became in 1931. 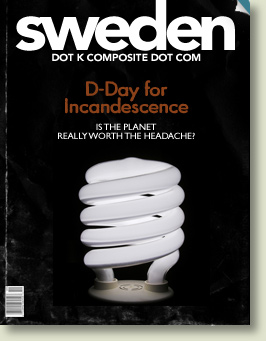 It has now been almost a month since the initial ban on buying and selling incandescent light bulbs in Europe went into effect. Compact fluorescent bulbs are now the law.

Phase One started September 1st when it became illegal within the European Union for distributors to sell incandescent light bulbs over 100 watts and for shops to order new supplies of them. Fines for circumventing the ban start around $8,000 for individuals and have no limit for businesses.

Existing supplies on retail shelves can still be sold, but they’re pretty much all gone at this point – snapped up by selfish people who don’t want to have mind-splitting headaches for the rest of their lives, and those who don’t want to wait three minutes for the lights to come on before they to walk into a room.

The remaining, clear, warm incandescence in Europe will fade below 60 watts in September 2011 and will be gone completely in less than three years.

The switch is on to these new bulbs whether we like it or not. (See how I did that? “The switch is on”? You know, like a light switch? Yep, still got it!) Even the Energy Saver icon in Mac OS was recently updated to the new bulb.

Not everybody is happy about the switch, despite the environmental benefits.

Outside of making everything look like shit, these new bulbs are also potentially quite hazardous. They emit the same crazy UV rays we wear sunscreen to avoid when we go outside. People who have skin conditions like dermatitis and eczema are especially at risk. And if one of these bulbs happens to break in your house, well, they’re full of mercury. I think I heard something bad about that stuff once. Oh yeah, I remember, it kills babies and makes your body reject its aliveness. (Yes, aliveness is a real word.)

If these bulbs are so painfully inadequate, flickering and harmful, how can they possibly be better than the warm, delicious incandescent light we’ve been basking in all our lives?

Well, it all comes down to the fact that Earth is a cowardly sphere that relentlessly retreats into darkness for half of every day – or half of every year in places like Sweden. Man has combatted this darkness since the beginning of time, using everything from camp fires and mobs carrying torches to white pants and neon lights.

When Edison came along with his commercialized light bulb, it was like fucking gangbusters. That shit was bananas. People had been in the dark for countless centuries – eventually updating to candles, gas lamps and other bullshit like that – but suddenly there was electricity (whoohoo!) and light bulbs and you could just, well, you could just turn the lights on.

Following the first public display of Edison’s light bulb in December 1879, people were shitting their pants. Everybody wanted one of them newfangled electricalized luminescent orb apparatuses. 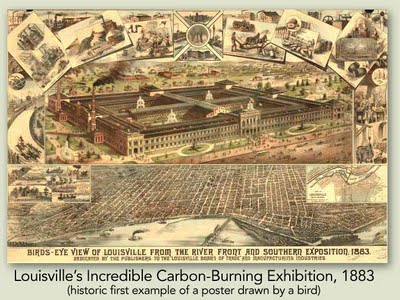 Just four years later, in my hometown of Louisville – walking distance from where I was born and where Edison had lived for a number of years – the gigantic Southern Exposition was illuminated by five thousand electric bulbs, the largest public demonstration to date.

People all but forgot Shakespeare’s line about being “in love with night.” Trå-å-å-å-åkigt! Let’s light this fucker up!

Man’s passionate love affair with light still continues to this very day. Maybe you’ve heard of Las Vegas – or the inside of your refrigerator. Edison’s doodads are everywhere. 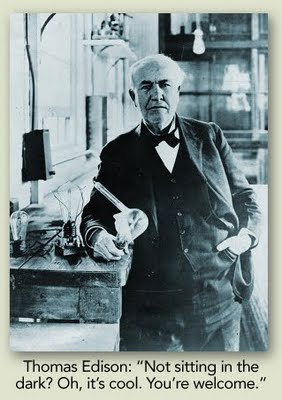 So while these fluorescent bulbs are still by now means good for people, after they burn out each compact fluorescent bulb can save landfills from nine additional bulbs. If such a ban were in place in the US today, the 2 billion burned-out bulbs discarded annually would be reduced to 200 million. If you can save 90% on anything, it’s a no-brainer.

Landfill space is great, but the real savings come in terms of electrical costs and the greenhouse gases that are emitted into the atmosphere by power plants as a result of everyone operating less-efficient incandescent bulbs. 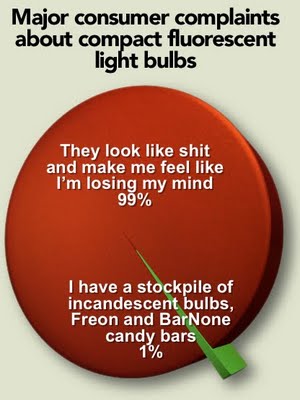 Granted all bulbs aren’t 100 watts – some are 60 some are 150 – but if you multiply that half-ton of greenhouse gases by 12 billion bulbs, well, that additional 6 billion tons (5.4 billion metric tons) of exciting, action-packed, global warming-causing gases is something in the air that I can’t even wrap my head around.

Suddenly it becomes a choice between living in a wash of pasty, flickering, anemic light or maybe not being able to sustain life on the planet at all. All because man created light where there was darkness. Sounds familiar.

After seeing those numbers, any attempt I could make to liken this ban to a Twenty-first Century version of Prohibition would seem utterly unfunny.

Like many important and similar issues, the United States seems last in line to address this one as well, though surprisingly not too far behind the curve. Incandescent bulbs in America will begin their phase-out in 2012. The year Europe finishes is the year America begins. Cuba and Australia beat all of us to the chase. Cuba is already completely flush with fluorescence.

I’m sure nobody in America knows about it yet, but it’s only a matter of time before the priceless public debate on the topic reaches the airwaves. Even though the ban in America will take the unholy step of daring to threaten the almighty free market, maybe it will be tolerated since the average American household will save around $70 through the life of a fluorescent bulb in energy and bulb-replacement costs. That seems like something Americans are into – being cheap and worrying about how much it will cost them personally.

If you miss the pleasant coziness of incandescent light you could always light some candles, right? Shit. I hate to be the bearer of still more bad news, but believe it or not, candles are actually worse for the environment than any of these kinds of light bulbs. Candles are one of the least efficient ways to produce artificial light. Ya just can’t win, can ya? 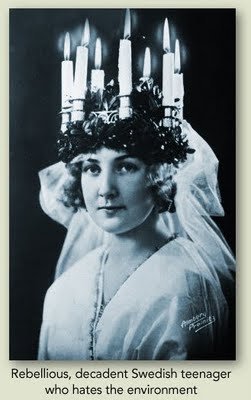 Candles produce less light, more pollution and more heat per lumen than incandescent light bulbs or fluorescents, and this pollution is not isolated to the smoke from the burning flame.

Not only are candles considerably heavier than light bulbs, resulting in more energy and pollution being expended in transportation, but they don’t last as long. This requires multiple candles to create light for the same length of time and because they are so dim it is rare that people use just one candle at a time.

Most candles contain paraffin wax which – talk about bad for the environment – is made from crude oil, a fossil fuel (petroleum sludge to be precise). Candles that don’t contain paraffin, for example those made of beeswax, are slightly better environmentally but generally more expensive. Beeswax produces less smoke but burns hotter and still contributes waste in the form of transportation and multiplicity.

Turns out that a candlelit dinner truly is special, if not indulgent! (Candles are really nice though.)

I guess artificial electric light is just like Mexican food or anything else. If you never got used to having the good stuff, you wouldn’t know it amazing could be. For kids who are being born just now, they’ll never know the difference. But for the rest of us, a lifetime of that bright, warm glow can’t be so easily forgotten when we walk into a cold, dim, blue room.

There are only a couple small incandescent lights left in our apartment and I really treasure the time I have with them. I can only hope that some new technology comes along that creates a quality of artificial light on par with incandescence. I haven’t seen it yet.

Maybe it’s best to just sit in the dark and wait until the sun comes up again.