One of the challenging things about learning to speak Swedish – and there are a few – is the process of becoming familiar with the sequence that words should appear in sentences.

Many years ago, someone told me, “Swedish is just German words with English grammar.” Ehh, well, guess what. It turns out that’s not really true. If it were, I would be zipping through the language with greater ease and Germans would be a lot less funny to Swedes and Americans.

What is true is that the sequence of words makes a big difference in, I presume, most any language.

The clip you see here is from an article I was reading in yesterday’s New York Times. It is from a serious article about addiction, but I couldn’t help but to laugh when I read this sentence that, because of the order of words, seems to imply that people who have recently gotten married are in need of a twelve-step rehabilitation program. That’s also not entirely true, though it’s possibly more true in some cases than the statement that Swedish is German words with English grammar.

In other language news, I’m happy to report something which has been inevitable for decades has finally happened.

The language I grew up speaking is now finally called American. Screw you, King George! 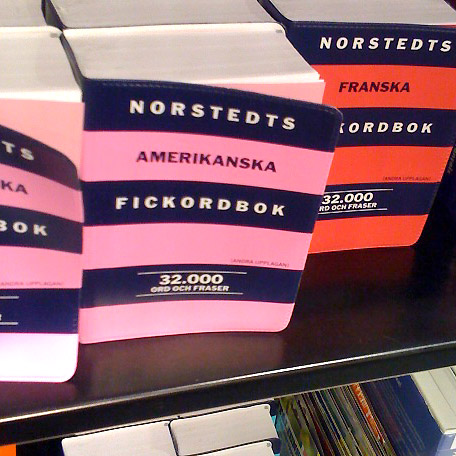 I saw the proof this week in a Stockholm book store. Right there on the shelf between the French and German pocket word books, in all its glory, “American.”

Of course, this renaming of the language is not news to most people in middle America who have been calling it American since they dropped out of high school to get married. Nonetheless, it’s about damn time.

Closer inspection of the book reveals it is actually “American English in terms of spelling, pronunciation and vocabulary.” It includes some hilarious genuinely American terms such as “y’all” and a section that instructs you how to tell an American about Sweden. I would think the first thing you should tell them is that Sweden and Switzerland are two different places. Maybe next you might mention something about the Muppets.

Later during the week, I had a discussion about the name of the English language – sorry, the American language – with a guy from England. You can guess how he felt about calling the language American. He compared it to how people from South America feel about people from the United States being called “Americans.”

He was upset because an ATM he visited had an American flag instead of the Union Jack as one of the language options.

I told this old chap that Americans had contributed more to widespread use of the language through our films, television, music, and schizophrenic foreign policy than the British had. I mean, the British had their days of conquest, but America’s empire (however crumbling) is still around. Really, more people speak English in India than in England. Even though that’s because of England’s overseas adventures, it still helps the case that regardless of the language’s origin, it has grown up and moved on. English is so over England.

I shared something else with this bloke that I heard years ago, “Only two good things ever came out of England: The Beatles and America.” To which he replied, “Well, I don’t know about one of those.” What, really? I thought everybody liked the Beatles.

In your face, you bloody lads! Fancy a biscuit then? USA! USA! USA!

Back to School with Old Timey Tower