As I mentioned before, most of Sweden’s coins carry a picture of King Carl XVI Gustaf, a man who is still alive and just 62 years old. 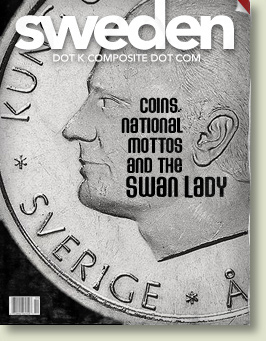 Every time he buys something, he pays with money that has his own picture on it. I’m sure he’s used to it now, but when he became king at age 27, it must have been weird at some point, like the first time he saw the coin. Perhaps it’s not strange at all since the previous coins had a picture of his dad (correction: his grandfather). Then again, he’s the king, so it’s possible that he never actually buys anything for himself, rather, he has people doing all that kind of stuff for him.

His profile image is updated periodically, so if you get an older coin he looks much younger. In every photograph I’ve ever seen of the King, he is wearing glasses, yet on the coins he is mysteriously unbespectacled. Yes, I think I just made up that word. It means “not wearing glasses.” Does he have contacts in or is it just not respectable to be bespectacled? 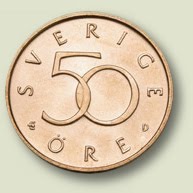 In America, there has been a debate going on for years about whether or not to stop making pennies. For quite some time it has cost more than one cent to produce the one-cent coins. Sweden is going to cease minting of its smallest coin next year. Interestingly, the 50 öre piece is worth about six cents in US currency.

If I was the king – which I had high hopes of becoming until that rascal Daniel Westling got engaged to Crown Princess Victoria about two weeks after I moved here – I’d probably carry around a little loose change. Jingle it in my pockets. Show people my picture. No big deal. 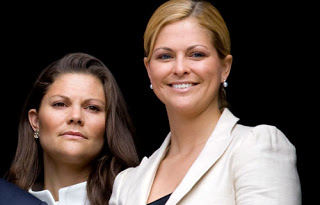 Daniel and Victoria aren’t getting married until next year, so anything can happen. I’d hate to split up the happy couple, as they are the darlings of the Swedish media, besides, I’ve really always had my eye on the younger sister, Princess Madeleine.

That’s Madeleine smiling there on the right. Victoria is behind her, not as happy because she has the weight of the throne on her shoulders for the rest of her life. Princess Victoria can look forward to being the first female to have her picture on a Swedish coin since 1720. Daniel Westling will be able to say, “Wanna see a picture of my wife?” each time he pulls a coin out. 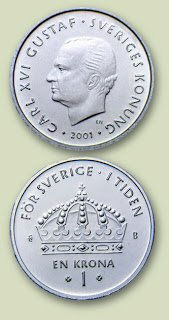 Each time Sweden gets a new monarch, that person selects a new slogan or motto. Some of the previous ones have been “Sveriges väl” (Sweden’s welfare), “Folkets kärlek min belöning” (The people’s love is my reward), and “Plikten framför allt” (Duty above all). Currently, the obverse side of Sweden’s coins are christened with “För Sverige i tiden” (For Sweden, with the times). King Carl XVI Gustaf picked that out when he took the reins in 1973.

In addition to choosing a more modest and contemporary royal motto, he also made addressing the king less ostentatious. Since the 16th Century, the king of Sweden has been referred to with an elegant title that roughly translates to “By the Grace of God the King of Sweden.” Carl XVI Gustaf ended that tradition by humbling it simply to “Sveriges Konung” (Sweden’s King). So maybe he isn’t so crazy about having his picture on the money. From what I’ve gathered, he seems like a very private and quiet guy. I hope that will make it easier for me to talk to him at family events when he’s my father-in-law.

I’m kidding, of course. I’m sure that if I end up with a Swedish girlfriend she’ll probably be someone like the Svankvinna. This lady is Sweden’s answer to the woman who had 130 cats. The Svankvinna (“swan woman”) is a 68-year-old lady who got busted with eleven swans living in her tiny, 85-square-foot apartment in central Stockholm. Her neighbors and the police thought there was a corpse in the building until they looked through her mail slot and saw a bunch of little swan feet walking around. What I wouldn’t give to see that view! “Chief, you better take a look for yourself.”

Iida told me about the Svankvinna last night when we overheard some guys in town using her name when saying that someone was crazy. Apparently if someone thinks you’re nuts, they can call you Svankvinna. This guy called her the Svantant (“swan old lady”), so I guess he has his own nickname for her. He’s an independent thinker and not about to follow the rules by using the media’s common name for her.

Anyway, the Svankvinna was “rescuing” all these giant birds and keeping them in her apartment to “help” them. She gave them baths in the tub every two or three days and carried them around in big, plastic Ikea bags! Awesome. She “fixed” one of their broken legs with a popsicle stick and tape. I love her!

This article about her is in svenska, but there are some priceless photos of the cops cleaning out her apartment. Even though the police in Sweden seem downright friendly compared to their American counterparts, it must be so hard to look authoritative when loading a trailer full of swans.

She told the newspaper that she usually doesn’t keep so many swans there and the apartment is usually cleaner, but they came on a bad day. Oh, I’m sure they did. As many as 150 swans had gone through her place over a period of seven years. Nice.

Unfortunately, my sweet Svankvinna was convicted of animal abuse and of being bat-ass crazy, and a few of the swans died.

Well, it’s Friday night, so I’m off to see if I can get a date with the Svankvinna. If she’s half as pretty as her blurred-out face in the newspaper… Well, I’ll let you know how it goes. 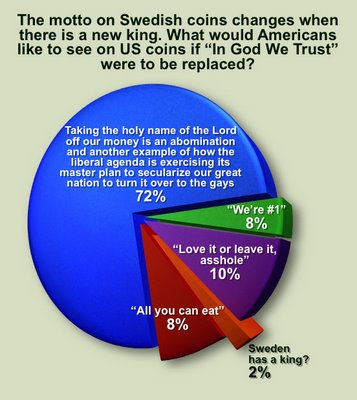 Swine flu? Never heard of it!