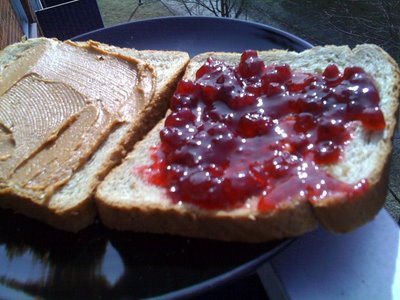 This afternoon, I prepared an international meal on the balcony in Hagsätra. Mixing my American heritage with the local favorite, here is a peanut butter and lingonberry sandwich. 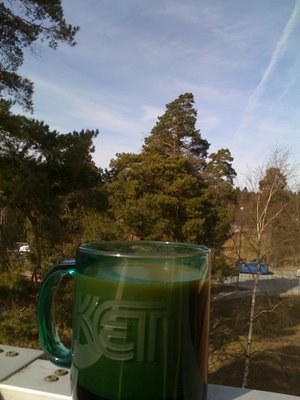 …and an Americano (espresso and water) with soymilk in my favorite mug. This mug is from Kentucky Educational Television in Louisville. I loved watching KET, their great original programs about Kentucky and the national PBS shows. I’m still watching Frontline here via the internet. I have also always loved the KET logo, which has remained virtually unchanged since I was a kid.

When I was running for mayor of Louisville in 1998, I was invited to the KET studios to participate in a televised debate. They had water in these mugs at the podiums for the candidates to drink. It was love at first sight with this mug.

After the debate, I asked one of the stagehands if he knew where I could get one. He looked around and with a nod and a wink said, “Just put it in your bag!” So I did. Since then, it has come along with me each time I moved from Louisville; Providence, Los Angeles, and now here it is in Stockholm. I only brought one bag when I moved, so I had to pack the mug deep in the middle, surrounded by sweaters and socks, to be sure it made the trip in one piece.