Karlaplan is a picturesque area of Stockholm on the island of Östermalm where five major streets meet to form a star. 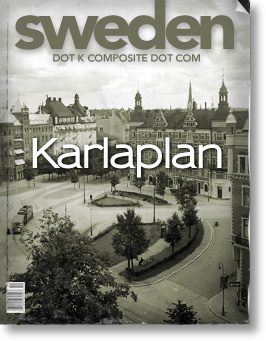 Inspired by similar street plans in Paris, construction on the neighborhood began in the late 1800’s.

The five tree-lined thoroughfares that go out in every direction have a dense, green lushness in the summer. Autumn and winter reveal more of the palatial, early-century apartment houses that populate the area.

Karlaplan’s name comes from an era of Swedish history known as Karlarna (“The Karls”). That was the time of a succession of three kings all named Karl that spanned from 1654 to 1718.

Famed Swedish author, playwright and absurd mustache enthusiast August Strindberg lived in a luxurious house on Karlaplan at the beginning of the 1900’s. After struggling for decades of hardship to make a success of himself, he finally rewarded himself by purchasing an extraordinary living space adjacent to the expansive plaza.

“I bought this for my thirty years of dramatic hardships,” he wrote. (Stackars Strindberg.)

See it on a map

Strindberg had spent a good deal of time in Paris in the 1890’s where he partied with Norwegian writer Knut Hamsun. (It’s true. Knut Hamsun is really a person’s name.) They probably talked about writing and stuff like that. It was only appropriate that Strindberg would be attracted to the fake Parisian neighborhood at Karlaplan.

Though Strindberg’s opulent residence was adorned with spectacular high ceilings and brilliant floors – he could practically hear the echoes of his rants about women and Jews – his fantastic surroundings couldn’t save him from despair. The eight years he and his wife lived at Karlaplan were reportedly among the darkest of his life, or so he wrote on his blog in 1911. 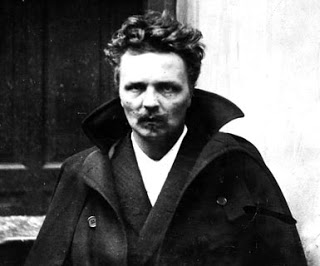 Aside from writing, crying and getting really bad haircuts while living at Karlaplan, Strindberg also dabbled in painting, photography and the telegraph. He was a real cutting-edge, high-tech kind of character, what, with the cameras and telegraphs laying around. In those days you couldn’t just pop down to Clas Ohlson and buy a telegraph.

As you can see in this photo, August Strindberg was definitely not a vampire.

Long after Strindberg was gone and automobiles were increasingly dominating street traffic, a massive roundabout was put into place at the site. In the 1930’s, traffic was redirected around a central fountain and a circle of trees that enclosed a public park which still stands today. Before the fountain, a small grassy island stood in the center of the intersection with just a single tree.

You can see in the 1880’s image on the magazine cover above that the tracks of a small street train used to bisect the intersection prior to construction of the larger traffic circle and fountain.

Many residents of the area pass through this circle on their daily commutes in cars and buses or on bicycles or their own feet. The fountain at Karlaplan is a popular meeting place for friends and a spot for picnics and relaxation. As an amateur Swedish picnic planner, I am well aware of the park’s charms.

I recently paid a visit to Karlaplan, not to check out the impressive streetscape of Parisian-inspired boulevards, but rather to see what lies beneath all of this splendor.

Carved into the bedrock below the all of the coziness at the street level is another stop in Stockholm’s underground subway system. Like most Tunnelbana stations, the one at Karlaplan is also a small art museum – an art museum 23 meters (75 feet) under the ground.

The Karlaplan station opened in the fall of 1967 and was part of an expansion that stretched the Red Line from Ãstermalmstorg to the northeast terminus at Ropsten. This added another 4 kilometers (2.4 miles) of track to Stockholm’s subway system and connected tens of thousands of residents to the system. 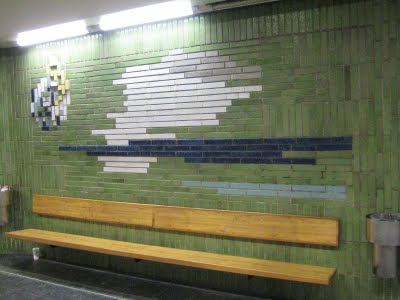 Some of the artwork in the station was built into the original design by architect Olof Blomkvist. Mosaic patterns of glazed stoneware blocks and colored bricks by artist Tor Hörlin are permanently set into the walls at more than a dozen locations throughout the station.

Located behind the benches where passengers wait for the trains, each structure is a different variation on the theme of “highly-stylized nature motifs.” The blocks differ in texture, size and relief. Some are sandy and flush with the wall, while others are glossy and protrude out a few centimeters.

Perhaps what makes the Karlaplan station most noteworthy is that since 1983 it has been home to the world’s longest photomontage.

Artist Larseric Vänerlöf is responsible for the monstrous, black and white piece which stretches nearly the entire length of the platform, in stark contrast to the colorful brick walls it opposes. 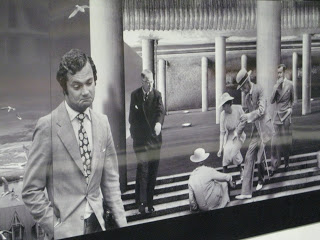 Den Dagen och Den Sorgen (“The Day and the Sorrow”) is 96 meters long (315 feet), or as they say in America, “longer than a football field.” Little-known trivia fact: big things in America are measured in football fields.

Comprised of hundreds of black and white photos blended together, this massive photo installation was assembled the old-fashioned way in a darkroom, long before Photoshop would have streamlined the undertaking. 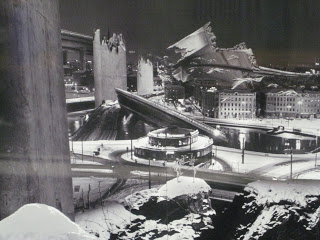 Vänerlöf went ahead and included the seventeen years of the 20th Century which had not yet happened. The entire montage is whimsical and funny, but the futuristic scenes depicted are downright apocalyptic and even more comical. These scenes depict familiar sites in Stockholm dwarfed by crumbling super highways and massive, post-industrial monoliths. 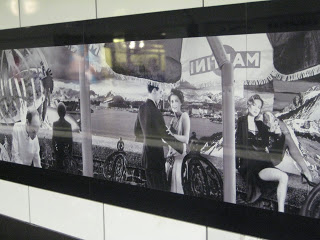 The gigantic photomontage was removed in 2005 for renovation. Vänerlöf explained in an interview with Filipstads Tidning newspaper that the art had faced a lot of elements in its 20-plus years hanging in the station.

The work had been badly damaged by everything from graffiti to snus, a totally disgusting, tiny, pouch-based tobacco that even the smartest people in Sweden are inexplicably hooked on.

Finally, in 2008, a reinforced version of Vänerlöf’s montage was installed in the station.

The new version contains the same images but to help it withstand the elements, perhaps for another 20 years or more, the original photographs were transferred to durable aluminum sheets that have a rich, deep gloss.

Yeah, so if you’re ever at Karlaplan, check it out. Good story.

Previous stories about art in the Stockholm transit system can be found here: