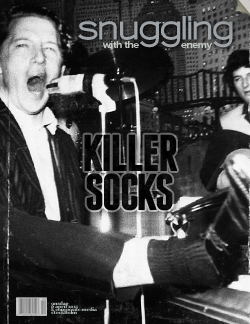 For the past few months, I’ve been wearing socks that don’t match each day. I prefer one wide-striped sock – usually on my right foot but not always – and one solid.

When the weather gets cold enough each winter, I recommit myself to one simple oath: “I refuse to be cold.”

The transition to walking around completely insulated against the elements consists of a base layer of long underwear, upon which I simply add more of the same clothes I wear every day. Double shirts, double socks, et cetera.

This morning as I put my socks on, I made my traditional winter transition to wearing two pairs of socks.

I had to make a choice. Would both pairs not match, even the two that aren’t seen? Would a secret match exist within the four individual socks? That is, one of the hidden socks would be a match to one of the visible socks?

While I ultimately decided that all four socks should be unique among the set, a larger realization occurred.

For the first time in my life it occurred to me that socks are probably not manufactured in pairs. There is probably a big machine somewhere that spits out 20,000 socks an hour, the loose products of which are then paired up by a machine that packages them, or by an 8-year-old kid with one of those plastic guns that stabs a white I-shaped tab between the two, uniting two socks, at least until they are removed from the purchaser’s feet for the first time.

Socks are born alone and die alone. The pairing of two so-called “matching” socks is merely an illusion that has been so masterfully perpetuated that I never realized it was not the natural order until I was an adult man. Today.

I have to add a caveat. This new insight into the sock world has not been confirmed or denied by any professionals with knowledge of sock manufacturing processes.

If there is a reader in the audience who can, in fact, confirm that socks are actually made two at a time, as pairs, please let me know.

The single sock theory neither sours nor sweetens my love affair with new socks. It only provides new insight into something that is likely different from the way I always presumed it to be.

Nor do I imagine it matters much to Jerry Lee Lewis, a man who has the means to live the dream, it has been said, to wear a band new pair of socks every day. Oh that I could live like that.