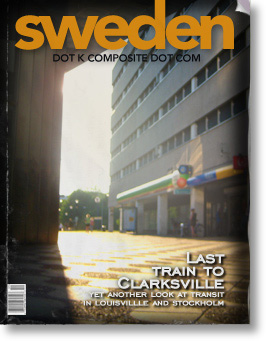 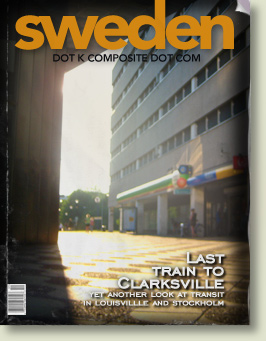 Those pieces can be seen at these links: 360° View from Slussen and Slussen+8664 Revisited.

Nonetheless, some have contended that the contrast between the cities isn’t necessarily fair. There is a perception that Stockholm is a much larger city than Louisville. People generally use population numbers as a measure of a city’s size, and yes, Stockholm is certainly bigger, no doubt about that.

Population isn’t the only factor that comes into play when gauging the effectiveness and cost of public transit systems, so in addition to that, you also have to consider components like surface area and density.

Not only is Stockholm’s population greater than Louisville’s, it is also condensed into a much more compact area. Swedish housing is decidedly more modest and economical than its Midwestern US counterpart. In Stockholm, nearly six people live in the same amount of space that one Louisvillian occupies.

It’s not so much that Swedes are crammed into tiny boxes or that all their Ikea furniture is so sparse, it’s more so that a great deal of the land in Louisville is consumed by super-sized roadways and suburban houses that sit on half-acre plots of land. The people are simply farther apart in Kentucky.

The scale of the streets and buildings in central Stockholm dates back several centuries and much of it still reflects the proportions of those bygone eras. (Yeah, I just said “bygone eras.” Don’t worry about it. At least it wasn’t “days of yore.”) 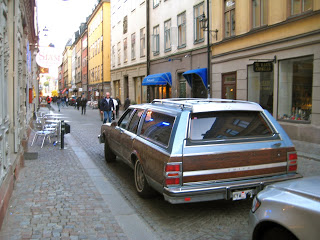 The contrast of these dimensions is perhaps no better illustrated than by how retarded this American-size car looks in Stockholm’s old town. My apologies if the photo is a little blurry. That would be on account of me laughing so hard in disbelief upon seeing a Buick station wagon in Gamla Stan. Blowin’ my mind, man.

Since I was a kid, I have always wondered why cars like this have fake wood on them. Does anybody really believe this car is made of wood? And if they did, would that be a good thing? It seems like wood is not the smartest thing to make an automobile out of, though if you crash it you could always rebuild it with the spare lumber you have left over from remodeling your kitchen. Oh well, perhaps I’m not classy enough to recognize the prestige of driving a wooden car.

I looked this car up on the EPA website and it gets about 16 miles per gallon (that’s about 15 L/100 km). In Sweden right now, it would cost the owner more than $4 to drive ten miles (almost 30 sek for 16 km). A dollar every 2.5 miles is so much that perhaps the driver ran out of money and just left it here. 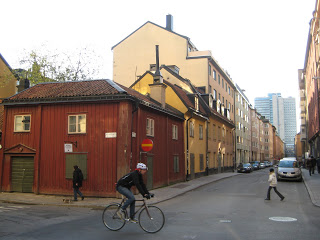 Louisville’s urban environment essentially developed over the past century. When George Rogers Clark set up the first settlement at the site of Louisville in 1778, Stockholm already had more than 500 years of rich history.

It’s not uncommon here to see rustic old buildings that recall the image of a misty ocean port, intermixed with 1800’s shop houses and modern glass-enclosed towers, all in the same glance.

If restricted to city boundaries, Stockholm’s population is only 14% larger than Louisville’s, but the metro areas are considerably different. Outside its city limits, Stockholm’s metro area grows to more than one and a half times the size of Louisville’s metro. The Swedish capital region will soon top 2 million residents, compared with Louisville’s 1.2 million inhabitants.

Here’s a complete comparison of the two cities along related topics. The homicide numbers are thrown in just for fun. (Ooh! murder! How fun!) I’m not sure if these figures include vampire-related deaths in Sweden.

The more concentrated population is an advantage for making public transit effective. Many more Stockholmers live within walking distance of a subway station than would be the case if the same transit system were magically plopped down in Louisville.

Louisvillians also have a comparatively narrower definition of “walking distance.”

If ten thousand people live within a five-minute walk to the nearest station, it makes the likelihood of people using the service much higher than if that walk were ten or fifteen minutes.

In sprawling American cities – Atlanta comes to mind – many people who use the rapid transit systems actually drive their cars to a spot where they catch the train. It’s easier and cheaper for them to navigate the urban area without a car, but the suburbs are so spread out that they don’t live near a station. 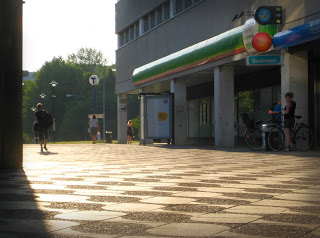 The number of automobiles per capita in the United States is the highest in the world, double the rate of ownership in Sweden. It’s not as high in Kentucky as in many other states, but the US Department of Transportation reports that 865 of every 1000 Kentuckians of driving age have a driver’s license. (See my previous story about the driver’s license process in Sweden.)

With all that in mind, I wanted to see how Stockholm’s extensive local rail system would look if it actually were plopped down in Louisville. I assembled a couple of maps.

I can’t imagine there are too many people in the world who are intimately familiar with Stockholm and Louisville, so more than likely, this won’t impress a wide audience of people who are not, well, me. 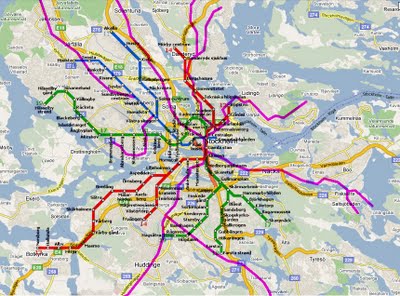 This first map is Stockholm overlaid with most of its light rail lines.

The colored lines are the primary Tunnelbana subway system that has 100 stations. The purple lines, while they don’t have their stations illustrated, include a number of other interconnected systems like the Pendeltåg (regional trains) and suburban commuter railways including Saltsjöbanan and Roslagsbanan. Those lines include more than 60 other stations not shown on this map. 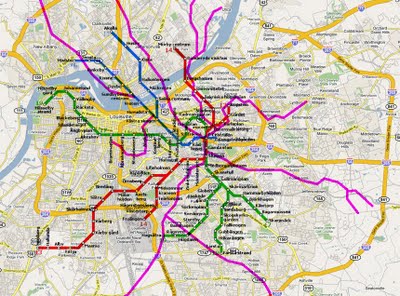 This second map is Stockholm’s rail system laid on top of metro Louisville at the same scale.

My first impression upon seeing these maps is that a transit system like this in Louisville would be absurdly excessive. That’s really good news since the higher-ups in Louisville seem eternally obsessed with sports arenas and hellbent on pouring billions into automobile infrastructure, rather than rapid transit. Construction on Louisville’s 15-station light rail system was scrapped in 2004 because of a lack of funding, but there’s no shortage of construction projects for highways. 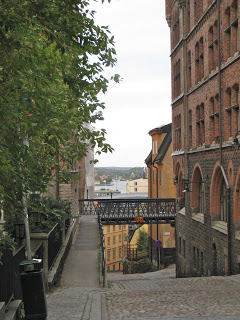 Coincidentally, one of the founders of the 8664 movement, Tyler Allen, recently announced that he is running for mayor in Louisville. Been there done that. I suspect he is better prepared and organized than I was 11 years ago.

The geographical layout and topography of the two cities is also a study in contrasts. I have always found it so odd that Louisville has its city center in a place that is not the geographic center of the city. Downtown is kind of in the north-west corner and most of the sprawl stretches south and east from there. This goes back to George Rogers Clark and the Falls of the Ohio being the impetus for the city being established.

In the map of Stockholm above, you can see why it is sometimes called the City on Water. Stockholm is laid across fifteen islands. That makes Louisville’s high water table and the Ohio River seem like paltry challenges to building underground. Louisville has enough surface area that tunneling beneath the ground would be largely unnecessary. Whereas Stockholm is more stacked upon islands, Louisville is largely flat with low hills.

What I can’t imagine is how nice it would be to get around Louisville without sitting at traffic lights all day. There are dozens of scenarios in which hopping on a train would be so much more convenient than the hassle of a car – whether it’s going downtown for business or going out for drinks – but maybe Louisvillians will never know of them.

Most Louisvillians aren’t old enough to remember the Interurban Railway and streetcars that existed in the city until 1948. It seems that considering the move toward green technologies, collective transit may be taken more seriously in the future.

If I had a time machine, (which I don’t, just so you know) I would really enjoy riding a train through Louisville with a bunch of people wearing hats, seeing the city bustling, churning out smoke and being all old-timey and shit. Maybe I’m being too romantic by longing for these long-departed days of yore.