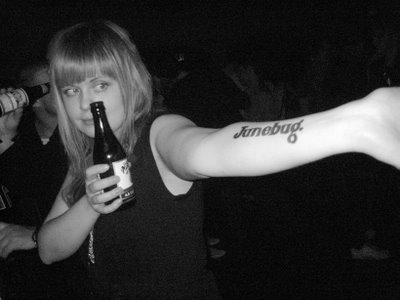 Tonight I went out on the town with some friends and ended up drawing on people. The city was alight with excitement because there was a big soccer game tonight: Sweden vs. Portugal. A lot of the bars had signs out front advertising that they would be showing the game. It was a qualifying match for the 2010 FIFA World Cup. Not quite the NCAA Basketball Tournament, I know, but in any event the final score was 0-0. That’s right. No points were scored during the entire ninety minutes of the game. Yeah, I don’t get it either, and I don’t know how that qualifies either team.

We were at Debaser Medis, just up the hill from Debaser Slussen. In 1999, before this place was the club it is now, I played a solo acoustic show here, opening for Lost Patrol, the solo project of Dennis Lyxzén of Refused and International Noise Conspiracy. This is also about three blocks away from Kafe 44 where Metroschifter played in the nineties and I also did another solo show back in the day. 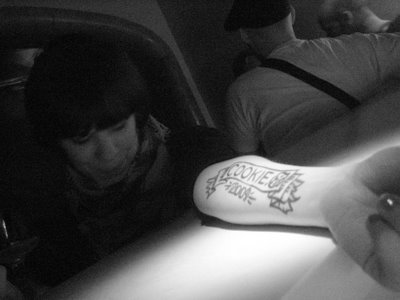 Anna “Cookie” Hesselman (whose nicknames also include “Bead Princess” because she runs a bead store and “Hazel Dude” because that’s a loose translation of her last name into English). Most girls in Sweden are named Anna or Emma. 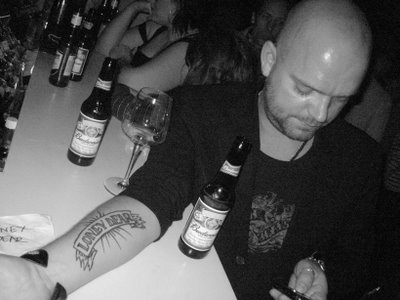 A guy named Henrik who I don’t know, but who wanted a Sharpie tattoo of one of his favorite Swedish bands, Loney Dear. He gave me his email address to contact him to possibly do some artwork. I asked him why he was drinking Budweiser and he blamed it on his friend. I would, too.

Johanna Westling (who has the same last name as Daniel Westling, the guy who is engaged to Victoria, the Princess of Sweden – they are unfortunately not related) This says “I heart Iida.” It’s true. Johanna hearts Iida.