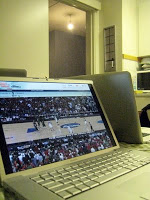 Tonight I had to send some apology messages to Louisville because I think I jinxed the basketball game against Michigan State.

You see, the only basketball that I watched all season was the second half of Sunday’s game. I tuned during halftime and watched the second half live via the CBS website. It was basically tied when I picked up the game. I think there were two points difference between the teams.

The good news is that the picture and sound quality were really pretty amazing. While I was watching it I was thinking that this is what the internet is supposed to be able to do – show me whatever I choose, as it happens, with quality as good or better than television. It was free, so I was blessed with all the US network commercials during time-outs.

The bad news is that it didn’t seem like Louisville could hit a basket or pick up a rebound during the entire second half. Michigan State didn’t have any trouble with either of those issues. Did Louisville turn off their hustle for Earth Hour? (My, what timely commentary! He’s using basketball terminology with an awareness of current events.) 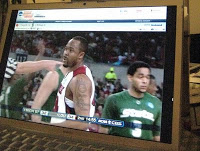 The game wasn’t a total loss, though. I took advantage of the opportunity to use some of the Swedish profanity I have learned. Maybe we can all learn something from this:

Get your white fists in the air!