This weekend will bring the Midsommar Festival in Sweden, a tradition which goes back many centuries and marks the longest day of the year. As you might have guessed, midsommar means “mid-summer.” Swedish ain’t so tough, see? 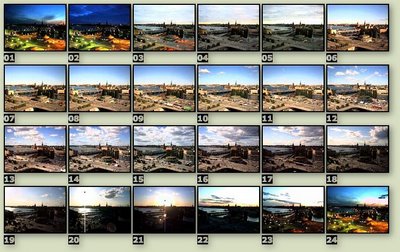 This time lapse image from the Slussen webcam shows one photo from every hour yesterday. As you can see, there’s really nothing left of our old friend, the nighttime. Don’t worry, though, like an unwelcome guest he’ll be back in the winter. It’ll seem like he’ll never leave.

Although the past couple days have been sunny and breezy, it’s unfortunately looking like rain will fall all over these festivities. But weather permitting, there will be lots of singing of traditional Swedish songs, eating tiny fresh potatoes, drinking schnapps (“snaps“) people dancing in circles around a flowery May-pole-style post (“midsommarstÃ¤ng“), acting like frogs and wearing wreaths of flowers in their hair. 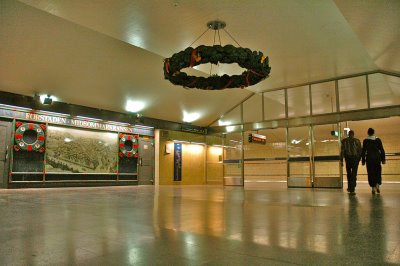 The Swedish word for “the wreath” is kransen, so the midsummer wreath is midsommarkransen. In honor of the significance of this holiday in Swedish culture, there is a nice neighborhood in Stockholm called Midsommarkransen. Part of the art in the Tunnelbana station there includes a giant midsommarkrans hanging from the ceiling.

If you ever had a book about different cultures of the world when you were a kid, the Sweden page probably had a picture of the Midsommar celebration.

(I think the Germany page probably had a picture of Oktoberfest, the England page had a dainty gentleman fancying a biscuit with an umbrella and a cup o’ tea with Big Ben in the background, the China page had one of the imperial temples, and the American page had a picture of a cowboy. The new version that kids have now probably has a picture of a blingy gangster rapper counting Benjamins and cappin’ a ho in the face. Click-clack!)

Swedes love to celebrate and will use just about any excuse to do so. It seems there has been a big holiday just about every month since I’ve been here. Midsommar and the recent National Day are non-religious holidays, but I couldn’t believe what a big deal Easter was, especially since such a small percentage of the Swedish population – only about 20% – considers themselves religious. 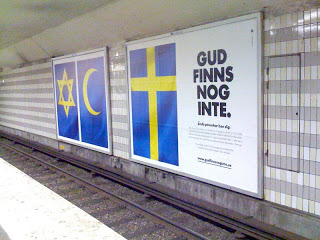 Currently, there are advertisements all around the city encouraging debate about the large role religion plays in society – even here.

The signs, sponsored by the Humanist Society, have the slogan Gud Finns Nog Inte. When I first saw them in the Tunnelbana stations, I thought that meant “God is not enough” and my first reaction was that this type of advertisement would never be allowed in America. Religious people (that’s code for “Christians”) would shit their pants and cry about it until every last sign was taken down and the people responsible were boycotted out of existence.

In reality, Gud finns nog inte actually means something more along the lines of “God is not probable” – which makes my original translation seem downright tame and my first reaction absolutely right. I don’t think such a campaign would even be attempted in America, namely because none of the companies who sell advertising space would risk the backlash from accepting the ads.

I should make it clear that I’m not trying to disparage anyone’s beliefs and I’m only bringing this up to compare the differences in cultures and perceptions. I certainly believe everyone is entitled to their own as long as they don’t infringe on anyone else’s ability to believe. That’s common sense. 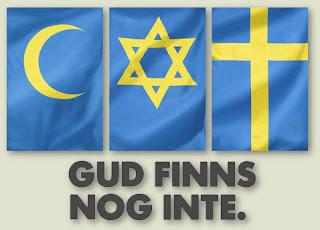 Of course, if you’re interested, there’s plenty more of my opinions and those of people who disagree (and many who generally miss the whole point) in my fantastic, amazing, critically-acclaimed, hilarious, wonderful, insightful, captivating, page-turning book Letters to Saint Clinton

As a graphic designer – and one who is not particularly religious but nonetheless peripherally interested in religious stuff – I have found it ironic that the Swedish flag appears to have a crucifix-style cross on it when hung vertically. The flags of all the Scandinavian countries are in this same style. The designers of this campaign have taken advantage of this characteristic in the ads by using it in a series of religious symbols. A nice touch.