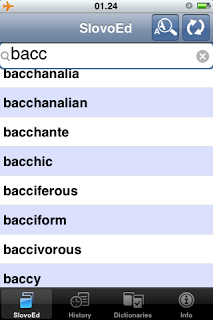 Here is a screenshot from the English/Svenska dictionary application on my iPhone. It allows you to search for a word in English or Svenska, or to scroll through the alphabetical list.

Just now, I was going to say that “bacciferous” seems vaguely familiar, but as I was typing it, my Mac underlined it – meaning that “bacciferous” is not in the spell-checker dictionary on my computer. I also ran it through the proper dictionary on the Mac, which is based on the Oxford American Dictionary, and it also wasn’t in there. Where is SlovoEd getting these words?

As an experiment, I looked up all the “English” words from this screenshot:

So it looks like I happened upon the section of the dictionary that would be super useful if you run into a Swede who is really into talking about Roman festivals and Greek mythology. That’s reassuring that I’m not completely crazy or forgetting my English vocabulary. The Oxford American Dictionary hasn’t heard of three of these words either.

FYI: If you have an iPhone and want to take a screenshot, just press both buttons at once. Your screen will flash and it will save the image in your photo album.