Public stairs in Sweden almost always have accompanying ramps or elevators. The ramps are used for wheelchairs, bicycles, rolling suitcases, baby carriages, you name it. Here is a small sampling of some around Stockholm. 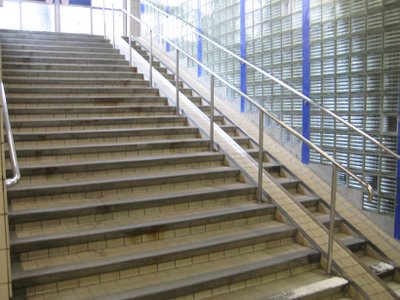 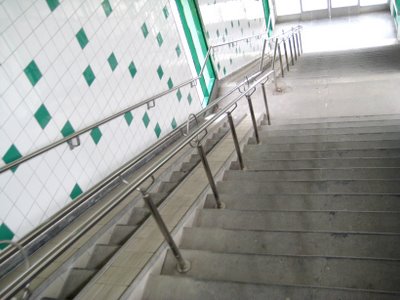 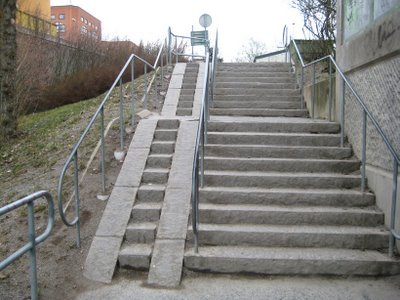 Also in Handen near the Pendeltåg station. 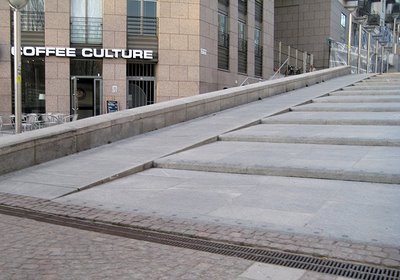 The coffee shop you can see in the last image is in the base of Söder Torn, the tall, octagonal building I described in an earlier discussion of stairs and architecture.

A lot of the coffee shops in Stockholm are named in English with monikers that seem designed to sound American. The Swedish word for “coffee” is kaffe, but around town you’ll see places named Coffee By George, Wayne’s Coffee, Espresso House, Robert’s Coffee, The Coffee Spot, just to name a few.

Although Starbucks has about 14,000 stores in 40 countries, there’s not a single one in Sweden. The closest one to Stockholm is in the Copenhagen airport, about six hours away in Denmark.

I always enjoy going to different places to get coffee to see how they do things differently. Really, if you open your own coffee shop, there are any number of ways to make it look. Especially in a design-conscious place like Sweden, there are a variety of gorgeous and creative examples of what can be done. It doesn’t have to have the uniformed, corporate look, and the same assortment of beverages.

But it’s no secret that some of the coffee chains here – like Wayne’s Coffee and Espresso House – are filling in the Starbucks void with derivative designs and products. That’s fine. I’m not a coffee snob and I’m not saying it’s good or bad, I’m just reporting the news here, people. I’ve been to a Wayne’s and an Espresso House within the past week.