Let’s take a look at a selection of photos from last Saturday which was Sweden’s National Day. How does that sound? Would you like that? Hmm? 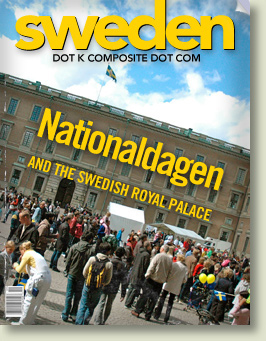 I’ve heard a lot of talk about how Swedes are so modest and not especially proud or nationalistic. That’s mostly true. Granted, there were no fireworks or any boisterousness equivalents to the familiar “U-S-A!” chants. I think there certainly is a lot of national pride here, but like everything else, it’s a little more reserved and quiet. Either way, there were thousands of people out celebrating everywhere last weekend. The weather was nice, so that helped bring out the crowds. The outdoor bars and restaurants were jam-packed and the parks were full of picnickers.

The Royal Palace was open to the public free of charge, so I stopped by there to have a look early in the day. The castle was swarmed by the people when I arrived (whoa, I said swarmed not stormed).

This was a already several hours after Princess Madeleine had done the ceremonial honors of opening the dump for the day. I would have liked to have made the scene a little earlier to catch a glimpse of my favorite princess, but since I had been up late the night before and because she has never called me – not once – I slept later and missed her.

I can only imagine that she was scanning the crowd relentlessly, looking past every face in hopes of seeing mine. “He simply must be here somewhere,” she thought desperately, all the while maintaining a coy yet official state-sponsored smile. 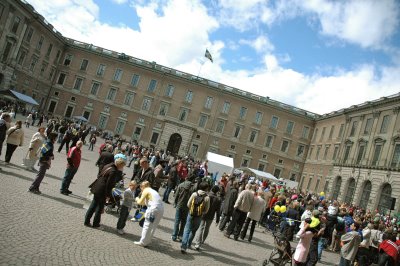 This isn’t your typical medieval castle with towers and a drawbridge. Because Stockholm is a city built on about a dozen islands, a moat and drawbridge would be kind of pointless. The Swedish Royal Palace is actually based on the French castle at Versailles – kind of a theme since, as we’ve learned, the Swedish Royal Family also came from France.

Completed in 1754, after fifty-seven years of construction (bo-o-o-o-oring!), it is the world’s largest royal palace that is still in regular use by its head of state. Of course, the heads of state in Sweden are ceremonial, but they still use the old shack. And why wouldn’t they? This little cabin home on the hill has a paltry 608 rooms. The photo above is from the center courtyard. You may notice several people in the photo who do not have blonde hair and are not dressed entirely in black. Rest assured, those people are tourists. 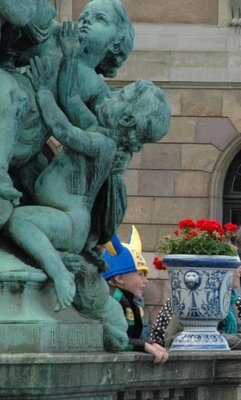 I recently met the woman who designed the directional markers and signage around the palace. Naturally, we talked about her font choices and the color combinations she used. While I don’t have any photos of those signs, I can share with you something she said that I’m not sure I will ever forget:

“The worst thing about America is the coffee… except for the racism and poverty.”

Yeah. I’d say those two things are probably worse than the coffee. Adding sugar or milk to a racist doesn’t really make it any more tolerable.

As I walked out of the royal compound to leave the oldest part of town (so old they call it “Old Town”), I passed some of the official guards in fancy hats. I guess a lot of countries have these guys who stand there all day dressed like they’re in a marching band and walk around like robots when it’s time to clock out. They’re not gonna stop anybody from doing anything and it seems that in modern times the true nature of their duties involves keeping a straight face while odd and assorted shenanigans and jack-assery are acted out in front of them.

The Swedish guards aren’t so strict. They actually smile and will speak with tourists who want to have their photos made alongside the guards. I guess there is even a bit of lagom in ceremonial guardposts. 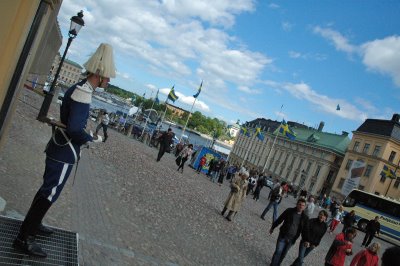 Everyone knows that Americans are crazy about their flag, especially around July 4th, but the Swedes are really giving theirs a pretty good showing for June 6th. I guess I’d have to say that it’s not really limited to Nationaldagen, the Swedish flag seems just about as omnipresent in Sweden as the American flag does in the United States.

In the photo above and the one right below, I counted 16 flags in each. There are probably more in the distance, but Old Timey Tower can’t see so well out of these old peepers. Suffice it to say that business is still booming at the local blue and yellow ink factory. 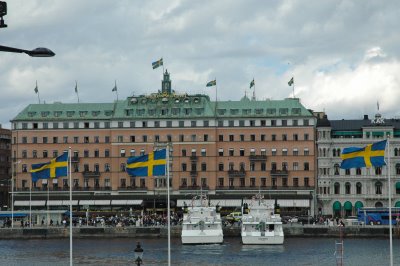 The image above is the Grand Hotel. When this photo was taken, Bruce Springsteen was probably inside this building. He played three concerts in the soccer stadium in Stockholm over the weekend and stayed at the Grand, as most illustrious visitors seem to. Since this was taken Saturday morning, I would presume he wasn’t out raging. 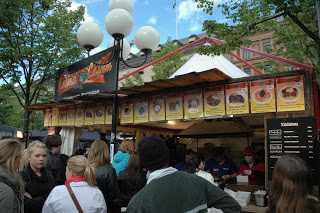 Had he been, he could have joined me at the Smaka På Stockholm Festival (“Taste of Stockholm”). In years past, I have seen this festival on television in America, so it was pretty cool to be living here and to just walk through it. Smaka is a typical street-food fair with quite a variety of cuisines from around the world, sponsored by Stockholm area restauranteurs.

One tent that caught my eye was called Latino-Cajun. I thought, “Oh nice, a little something from the Bayou or the Deep South.” Well, sort of.

Their menu board had jambalaya but also a little shout-out to my homeland: Kentuckyfriterad kyckling (you guessed it, “Kentucky fried chicken”). Kentucky isn’t anything close to being Cajun or Latino. What is considered Southern-fried or Kentucky-style fried chicken (even outside of the restaurant by that name) isn’t really the kind of fried chicken they had here.

It’s still really cool to see “Kentucky” on a sign so far from home. Most people in Kentucky don’t even know the difference between Sweden and Switzerland, so I’m not gonna get all upset because somebody here isn’t schooled in the minute details of American menu items, geography or “culture.” However, this may be the only place in the world that sells “Kentucky fried chicken” and also has a wine list. 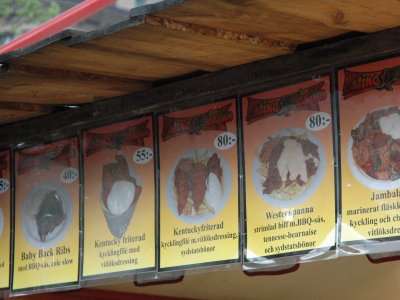 Without fail, every single time someone asks me where exactly I’m from in the United States, and I say “Kentucky,” the next words out of their mouths are, “Oh, Kentucky Fried Chicken!” I smile and laugh, “That’s right!”

While there are a lot better things Kentucky could be first known for (Muhammad Ali, bourbon, Johnny Depp, George Clooney), there are really a lot worse things also. I don’t eat animals, but all things considered, being known for a type of food isn’t so bad. My German teacher in high school, Klaus Mittelsten, said the thing he always heard was that “Kentucky is famous for its beautiful horses and fast women.”

Wait a minute. Did I just say “shout-out” a few paragraphs back? I’m sorry about that. I try to keep my writing a little more gentlemanly and proper than that (and not “proper” in the MC Hammer sense). 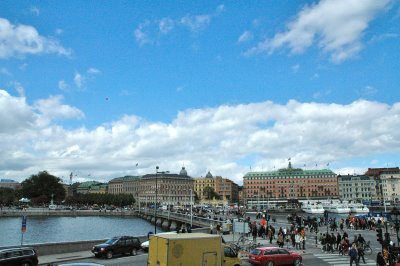 Other than being a national holiday, it was also a big weekend for sports in Sweden. The Volvo Ocean Race was rolling through Stockholm. This race is nicknamed “The Mount Everest of Sailing.” I’m sure you can see the similarities: these multi-millionaires on their boats know exactly what its like to freeze or starve to death alone in the cold. Riding on a sailboat followed by a television crew is just the same as breathing thin air at the top of the atmosphere with ice all over your face, then arriving home to have your frostbitten toes amputated.

Maybe it’s a clue that your sport sucks if one of its highest pinnacles is nicknamed after a high pinnacle from another sport. Can you imagine one of the climbers turning to Sir Edmund Hillary following their brutal ascent to the top of Mount Everest and saying, “Sir, that historic climb was more punishing than a sail boat race. I mean, they should call Mount Everest ‘the sail boat race of mountain climbing.'”

Also happening in the big weekend of real sports, Sweden’s own Robin Söderling surprised tennis spectators by meeting Roger Federer in the final of the French Open, and the Swedish national soccer team was hosting neighboring rival Denmark in Stockholm. 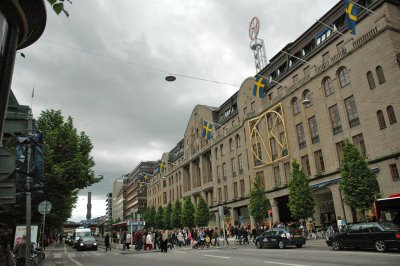 As I made my way out of the Kungsträdgården park, where the food fest was, I was quite accustomed to the sea of blue and yellow flags. When I turned the corner and reached one of the city’s main plazas at Sergels Torg, I gasped in horror as my breath was taken away. 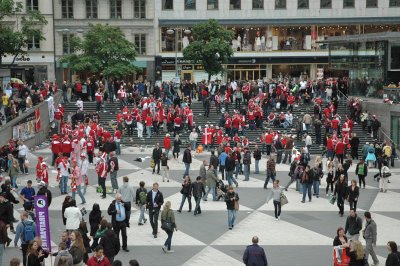 What laid before me was a hideous mess of Danish football fans, cloaked in their foul red and white, singing drunken soccer anthems, and surrounded by piles of garbage in a mess of Tuborg and Carlsberg cans. They had posted their flags around the square like red blood stains splattered on a beautiful blue-and-yellow day.

The whole disgusting display turned my stomach. Like an obscene parasite on the city, these filthy Danes had all the aristocratic etiquette of a bunch of Yankees fans parading through Boston. 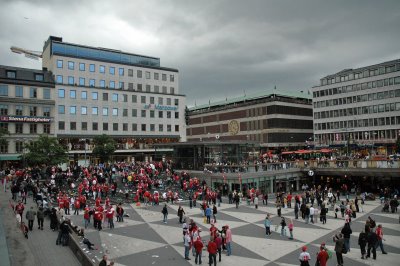 (Note: I actually love Denmark and I thought it was really pretty hilarious that all these guys were making a ruckus in the middle of Stockholm, I’m just trying to assimilate in Sweden by acting offended.)

Some countries have rowdy soccer hooligans who flip over police cars, trample other fans, or get in fights, but perhaps you’ll enjoy this take on some more respectable fans in Sweden. This is from a Swedish sketch comedy show called “Hipp Hipp” from a few years ago. It’s all in Swedish, but I think you can get the idea.