The new record by the Metroschifter, featuring a blood-spattered cover image of our beloved Stockholm, is finally available! 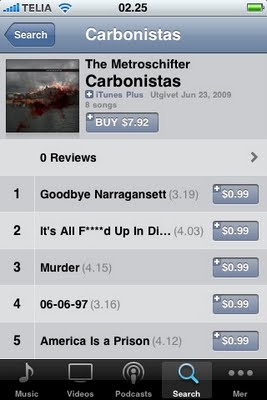 As you may know from previous stories on this website, Carbonistas has eight new songs that were recorded at the beginning of this year, just before I left Louisville.

The paper-and-plastic version (compact disc) is available from our special friends at the Noise Pollution label. In Louisville you can pick one up at ear X-tacy or, wherever you live, you can ask for it at your favorite record store.

If you buy Carbonistas or any of its songs from iTunes the tracks are formatted so you can use them as ringtones on your iPhone.

If you notice in this screenshot from my iPhone, there are no reviews for it yet, so click this link to give it 5 stars or write a review!

This week we also received the first tentative dates for our tour of Europe that is coming up in November and December. The three-week schedule looks amazing.

The usual suspects of Germany, Belgium, the Czech Republic and Austria are included, but a few surprises are in there including some shows in France and Spain. At the risk of sounding like a Three Dog Night (or Elvis Presley) song, I’ve Never Been to Spain. Can’t wait!

This tour should be especially fun because the “real” members of Metroschifter will be with me. On some tours in the past, either Pat McClimans and Chris “Hört” Reinstatler (or both) have been unable to go. As a result, the touring band has had a succession of alternate members. 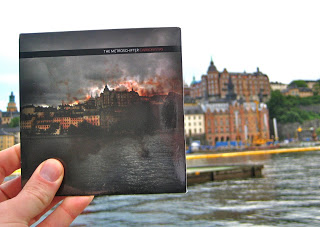 I have enjoyed every tour and I really love seeing how the songs take on a different flavor when different people play them, but since Hört and Pat are my best friends, there’s nothing quite like being able to travel and play music with them every night.

We have a tentative song list together which we’ve been ironing out via e-mail. This time we’re learning a lot of our recorded material so we can mix up the set list and each night’s show will be a little different.

Typically, after a tour is over, there is a mad scramble to return all the equipment and the van, make sure we’ve paid all our bills, and get everybody to the airport in time. This time, we’re planning to just hang out for three days, which is something we’ve never done before – sort of like a little European vacation with friends. I’m as excited about that as I am about the tour itself.

Personalized Metroschifter CDs: behind the scenes