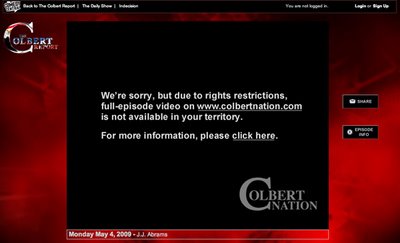 Over the weekend, Comedy Central began blocking online viewing of videos on their website for anyone outside the United States. This includes The Colbert Report and The Daily Show.

How the hell am I supposed to get any real news in this damn country full of liberal socialists if I can’t watch these?

Of course, I can circumvent the restriction and trick their servers by entering an American IP address into the proxy settings in my network connection preferences. That’s what I ended up doing last night to catch up on a few episodes. What a pain in the ass. Life really sucks, huh? You can’t watch free comedy any more? You poor dear.

The same situation was already the case on other major US network sites like ABC and Hulu. There are actually a quite a few television sites that are blocked outside the US or are redirected to local media partners.

So much for the “world wide” web.

Thirty and forty years ago