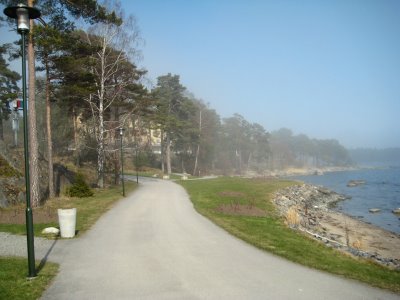 This weekend, Iida, Erik, and I spent some quality time with Erik’s parents. We visited their house on Saturday for a delicious Easter feast which I would compare to Thanksgiving in America. There was more amazing food than you could eat, plenty of candy, drinks, and football (er, soccer) on television. 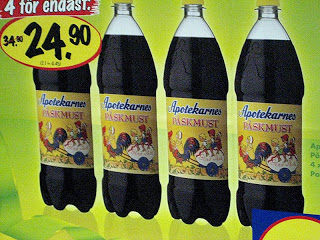 Also on hand was a plentiful supply of Påskmust, a traditional Easter cola. This stuff has been around for a hundred years or more. There is also a Christmas version, Julmust, which I tasted back in 1999 when Metroschifter played in Stockholm at Kafe 44. These drinks are so popular that there are several brands and they cause Coca-Cola’s sales to drop when they come out each year. Coke has tried to make their own Påskmust in the past, but they received a lukewarm reaction. I’m not sure how to describe the taste of Påskmust. It’s cola-esque, but maybe with a hint of mint or something. They’re tasty, but I can’t say for sure what they’re like.

I had hoped to see some little kids dressed as Päskkärring (Easter witches) over the weekend, but we didn’t happen upon any. Two little girls from the neighborhood did knock on the door, deliver some homemade cards, and sing a song for us. They collected some candy and applause in exchange for their performance. 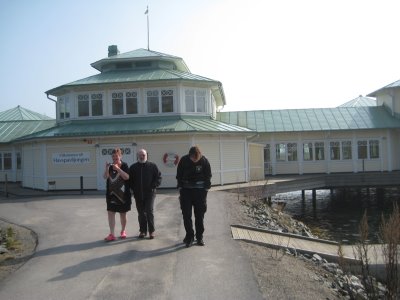 Erik’s parents are great. His dad drives a Volvo wagon, much nicer than the one I used to have. Sunday he drove us all down to the ocean at Nynäshamn. His mother is a huge fan of Elvis, which almost excuses her preference of Floyd Patterson over Louisville’s hometown hero Muhammad Ali.

His dad was kind enough to print out a 17-page Swedish test for me since I don’t have a printer yet. It was a placement test to evaluate which class I should start in. The Swedish language is coming to me more and more every day, but I really need to intensify my learning and usage. While most Swedes seem to really enjoy speaking English, I feel like it’s rude for me to not speak the language here.

I took the test this morning in the construction zone where I’m living and scored about 37%. That should probably place me in the second level, but I’m waiting to hear back from the school to find out for sure. As expected, the main things I don’t know are verbs, forms of verbs, and forms of adjectives. It was a written test, so it doesn’t take into account how much my pronunciation sucks. 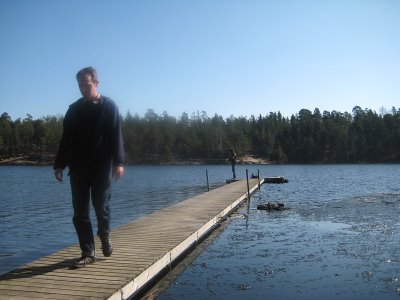 Sunday morning, we also walked to a nearby lake in Haninge. The last of the winter ice can be seen floating in this photo of me traversing the dock. A couple weeks ago people were walking on the frozen water, now they’re fishing in the sunshine. The hours of daylight in the mornings and evenings are getting noticeably longer each day.