I recently noticed that the Tunnelbana trains have names. A nice touch, I think, although I don’t care for the font. Here are Ted and Maria. You would expect a transit system to give them catchier names like TF0142581 and XG532014.

While riding inside the T-bana (I almost wrote “when riding inside Ted” but that didn’t sound appropriate), I saw this hilarious ad for Teknik Magasinet, one of several popular novelty gadget stores here. This is advertising a game where you can try to shoot your friends and if you hit them it shocks them. Sounds like loads of fun, right? This store has all kinds of ridiculous stuff like that. You can also see the electric nose hair trimmers in the ad. Today, Erik picked up their catalog which is called Prylbibeln (“Gadget Bible”). He was telling me about how every time the publish a catalog they include a fake item and it’s a bit of challenge for everyone to figure out which one of the thousands of absurd items isn’t real.

Speaking of pranks, yesterday was April Fools Day and several newspapers ran fake stories as their Aprilskämt. One was about the introduction of a new exclusive section on the subway. If you bought a VIP card you would be treated to reserved seating, cookies, and coffee during your daily commute. Another paper ran a story announcing that it was now illegal to stand on the walking side of the escalator. The fake stories were the talk of the town. 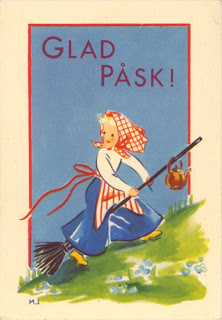 Surprisingly, the electric-shock ad is for “cool Easter gifts.” For Americans, Easter in Sweden would seem like a mash-up of the customs we know from Christmas, Halloween, and Easter. The little girls dress as the Easter Witch, in a traditional costume with a long skirt, broom, head scarf, bright red cheeks, and freckles. A black cat sometimes follows her in drawings.

The kids in costumes go door-to-door for candy, which is usually egg-shaped, or comes in egg-shaped containers. Hiding the eggs and the egg hunt are relatively new things, imported from America. Instead, the kids leave little cards behind, some make their own. I’ll try to get some photos of little Easter Witches next weekend, but if you click this Google Image search for “påskkärring” you can see an assortment of what it’s all about.