As you may know, I make my living as a designer and writer, both for the Internet and printed materials. Lately, I’ve been doing much more designing than writing, at least in the for-hire department. My clients are all in the United States, so I’ve been doing all this work over the Internet and telephone. Some days I am loaded with work and other times I’m free to sit in the park or explore Stockholm.

A few big projects I’ve been involved in recently have just launched. I thought I’d share them so you can see what I’ve been doing. 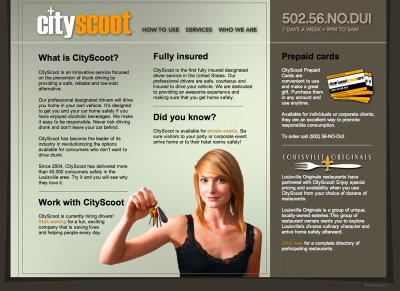 CityScoot is a designated driver service in Louisville. If you’re out having a few drinks and it wouldn’t be safe to drive, these guys will come to wherever you are and drive you home in your own car. They travel to you on small motorized scooters that fold up and are stored in the customer’s trunk or back seat. After you’re home safely, they unfold the scooter and drive away.

I built CityScoot’s website and have done all their design work since they launched the company about five years ago. Their website was designed back in 2004, so needless to say, it was time for an update. You can see an image of their original site on the right and the new version above. The overhaul took a few months, but they are (and I am) very happy with the new design. The working version is online at www.cityscoot.com.

Drinking and driving seems to be a much bigger problem in America than in Sweden, if only due to the proportional number of drivers. In Stockholm, public transit is ubiquitous, so the opportunity for it to happen is greatly reduced. Most people don’t drive anyway, much less when they’re going to have a drink, and yes, I meant to say a drink. Sweden’s blood alcohol limit for drivers is 0.02%. In Kentucky, and I think in most of America, the limit is 0.08%. I know from experience that just a few drinks can put you over the 0.08% limit, even if they’re spaced out over a couple hours.

In the wide-open spaces of America where walking, biking, or public transit aren’t options, CityScoot is a wonderful thing to have available. It’s kind of strange now that I haven’t driven a car in nearly three months. Automobiles are such a big part of life in America and yet I’ve only been in a car a handful of times here. In Louisville, even if I wasn’t the one driving, I was typically in a car pretty much every day. Earlier this week, I shelled out the kronors for my SL Sommarkort which gives me four months of unlimited access to Stockholm’s public transit. Where do I want to go first? 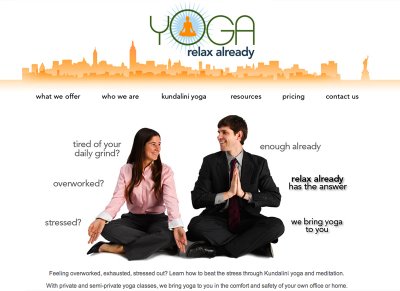 In the same way that CityScoot offers an unusual delivery service, so do some other people I work with in New York City. Two of my friends started a company called Relax Already which delivers yoga sessions to busy people in the city.

They work with a lot of stressed-out Manhattan executives and banker-types who are unable to take the time out of their days to visit a yoga studio. Making another stop during your day in New York could add an hour to whatever you’re doing. Relax Already “brings yoga to you” so they end up running relaxation sessions in conference rooms, offices, homes, or wherever their clients happen to be.

This is another company I’ve been with from the very beginning. Their logo, business cards, brochures, and website are all my handiwork. Their website just launched and you can check it out at www.relaxalready.com. 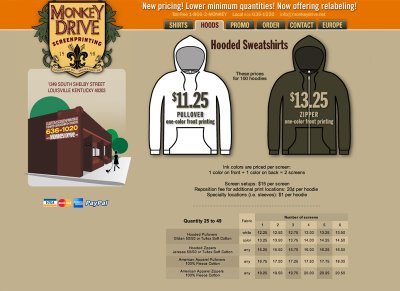 Monkey Drive Screenprinting is run by one of my best friends, Chris Reinstatler, who also plays drums in Metroschifter. He operates this company that prints shirts and all sorts of other stuff for bands, small businesses, and other groups. In started in Cincinnati in 1998 and moved with him to Louisville about ten years ago. Monkey Drive also has a partner company by the same name in Frankfurt, Germany, that offers printing and shipping all over Europe. 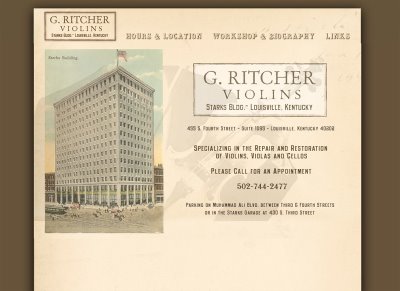 My sister Greta recently moved back to Louisville from Chicago where she had been building and repairing violins. A few years ago, she opened a shop in Evanston, Illinois, called Col Legno that I made the website and print materials for. The name “col legno” is a term for the sound that is made when the wooden part of the bow strikes the strings.

Now that she’s back in Louisville, she has opened a string instrument workshop called G. Ritcher Violins. Her space is in one of the city’s beautiful, old, downtown buildings. I tried to give the website for her new shop an old-timey look that would reflect that setting and the work she’s doing.

You can see the G. Ritcher Violins site at www.louisvilleviolins.com and the older site for the Chicago-area shop at www.collegnoevanston.com.