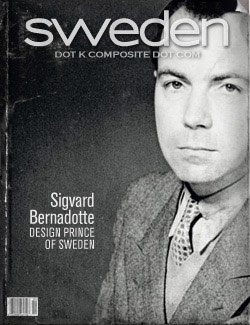 Part 2 of 2 on the life of Sigvard Bernadotte. See the earlier story of his battle to be reinstated as a prince at this link.

While Sigvard Bernadotte may not have left our world as a prince, he is commonly referred to as the “Design Prince of Sweden.” That title is perhaps even more honorable because it hails his contributions and accomplishments rather than simply a name someone can be born with.

Bernadotte is one of the few people born into the Swedish royal family who was able to carve out a name for himself and to have a direct, lasting effect on the daily lives of ordinary people.

While you may never have known his name or face, you are likely familiar with his work as a graphic artist and industrial designer. You may even have a piece of his work in your home.

During Sigvard Bernadotte’s career as a graphic and industrial designer, he amassed an impressive and influential body of work, the products of which – calculators, can openers, flatware, radios – have found their way into literally millions of homes and offices around the world. Under the shadow of his fight to regain his royal title, Bernadotte blazed his own way, building a reputation and legacy as one of Sweden’s most famous and revered designers.

The clearest indication of his global impact is the simple fact that many people who are familiar with the Swedish Royal Family recognize the royals only by their titles – such as King Carl XVI Gustav – yet they are unaware that the family’s last name is Bernadotte. Sigvard Bernadotte arguably made the Bernadotte name more recognizable as his own than it is for the royal family he was denied a place in.

Hard to believe, I know, that some dude who basically drew pictures of tea kettles for a living could have been so influential. Maybe if you’ve ever burned your hand on ugly, crappy, old tea kettle or had something slip out of your grip you can appreciate the work that goes into making the simple things in life more livable.

From an early age, young Sigvard was influenced by his great uncle, Prince Eugén. His great uncle was recognized as much as an artist as a member of the royal family. Eugén became known as the “Painter Prince” and earned a stature as one of the top artists of his day. (That day was a reeeeeally long time ago. The Painter Prince lived from 1865 to 1947.)

Sigvard recalled his great uncle’s example in a 2002 interview with the now-defunct but nonetheless gorgeous Stockholm New Magazine, saying that Prince Eugén’s attitude of making his own way in the world was an unforgettable early inspiration.

Eugén reportedly advised Sigvard’s father, Gustav VI Adolf, to not feel bound by his nobility. “Gusti, look at me. I’ve done quite well for myself,” he proclaimed, implying that a man could be whatever he chose in life. Amen to that, brother. Don’t let the man keep ya down, Siggie.

Young Sigvard took this sentiment to heart post haste. At age 16, he became the first member of the royal family to ever graduate from high school. Apparently it didn’t take much to be an overachiever in that family. He was born in 1907, so we’re talking Class of ’23 here.

Within a few years he had upped the ante to become the first Swedish royal to graduate from college. He earned multiple degrees at Uppsala University, studying art history, English and political science. As he had grown up the Duke of Uppland, it was somewhat notable that the local duke had graduated from the local university.

Being among common people quickly became a theme of his life. From there, Sigvard was off to studying theater in Munich. (Slow down, dude, you’re making us all look lazy!)

After a couple more years, Sigvard was working as an apprentice under famed Swedish artist Olle Hjortzberg, famous for designing the 1912 Stockholm Olympics poster. 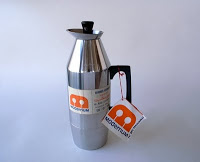 Hjortzberg can be credited as a significant, early influence toward Sigvard’s eventual focused and discplined style. Stockholm’s Aftonbladet newspaper described Sigvard’s style in a postmortem retrospective by saying “His idiom was tight and stylish.” Hjortzberg’s trademark style was just that.

At age 23, after leaving his appreticeship under Hjortzberg, he began sharing his time between crafting silver pieces for Georg Jensen in Copenhagen and directing films and doing set designs for MGM in Hollywood. 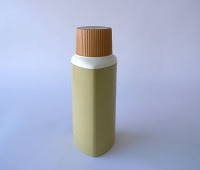 Finally settling down a bit at age 43, Sigvard Bernadotte teamed up with Acton Bjørn to establish the cleverly named Bernadotte & Bjørn industrial design studio in Copenhagen. That was 1950.

As Scandinavia’s first company dedicated exclusively to industrial design, you can’t really understate what a ground-breaking and influential move this was. The recognition that Scandinavian countries now enjoy as design capitals of the world can be traced back to this forward-thinking move. It seems only appropriate that Swedes and Danes collaborated to make it happen. 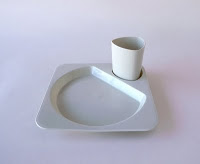 Bernadotte & Bjørn specialized in what has been described as “functionality with a human element.” They were very much inspired by American ideas and practicality, but brought a refined simplicity to their work.

The company grew with Sigvard dividing his time between design work and actively pursuing clients. Whether the items were kitchenwares for Husqvarna, flatware for Scandinavian airline SAS, bowls for Rosti, radios for Bang & Olufsen, it was functional objects that were his greatest joy, so he sought clients whose products were used in everyday life.

In 1953, Sigvard published a book as an homage to the craft he so loved. Almost as cleverly named as his company, his book Industrial Design was also revered for its simplicity and beauty. 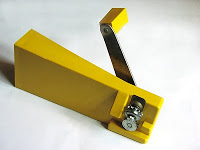 Before long, Bernadotte & Bjørn expanded to establish branch offices in Stockholm and New York. The firm boasted an impressive list of international clients – clients who became as known for smart design as Bernadotte & Bjørn themselves. Having produced everything from tables and chairs to eyeglasses, if you had the money, you could conceivably outfit your home entirely with Bernadotte & Bjørn designs.

His reputation was so solidified by the early sixties that Sigvard became president of the International Council of Societies of Industrial Design and served in that capacity for nearly three years. He also co-founded the Society of Swedish Industrial Designers. 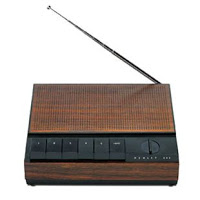 After fourteen years of innovative collaboration with Acton Bjørn, it became time for Sigvard to strike out on his own again. He did that in 1964 by establishing his own design studio in Stockholm. Again, a real joker with naming things, he dubbed the studio Bernadotte Design AB. (“AB” stands for “aktiebolag” and is the Swedish equivalent of “corporation.”)

Bernadotte Design continued cranking out the goods and Sigvard continued his hands-on approach. His house of designers was said to have enjoyed his constant involvement, and the new company quickly covered the ground from classical dinnerware to the logo of the Marabou chocolate company – as omnipresent in Sweden as Hershey’s is in America. 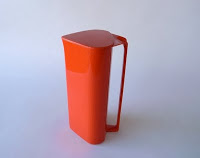 To chronicle his life’s adventures, he published another book in 1975. This one, Krona Eller Klave (“Heads or Tails“), was his autobiography. The book debuted when he was 68 years old, though he would live another 26 years after its publication, barely slowing down before his 2002 death at age 94.

Sigvard Bernadotte’s designs have proven to be timeless. The practical sensibilities he brought into his designs for usable, everyday items still balances the lines between retro, modern and futuristic. His classic silversmith work is represented in the permanent collection New York’s Metropolitan Museum of Art. 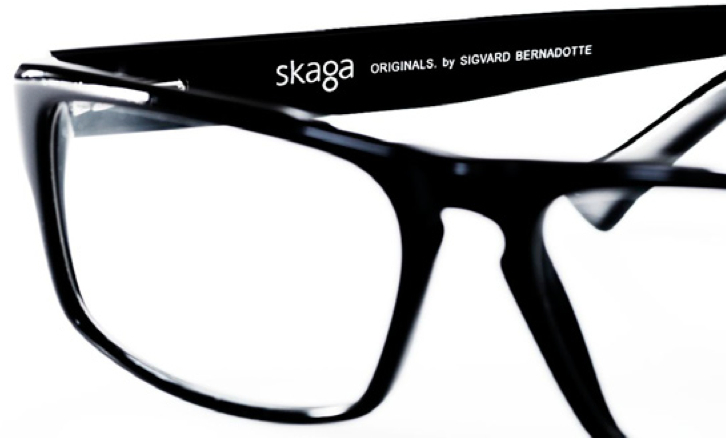 Even now in 2010, manufacturers are producing new items based on his designs. Swedish eyewear maker Skaga has just released a beautifully simple line of eyeglasses from Sigvard Bernadotte’s drawings from the 1960’s.

I need a new pair of glasses and I think I found just what I’m looking for here. How amazing would it be to be able to use one of Sigvard’s designs every day to see my own design work with more clarity? Now it’s just a matter of deciding which ones I want and then saving some dollars and kronor.

Despite decades of fruitless appeals to his nephew, King Carl XVI Gustaf, to restore his princely title – some would say being a “royal pain in the ass” – recognition and appreciation from the current royal court is not entirely absent.

In the summer of 2008, both current princesses, Sigvard’s great nieces, chaired the grand opening of an exhibition of his lifelong work in pioneering Swedish industrial design.

The exhibition at the Sofiero Park in Helsingborg displayed “a wide range of Sigvard Bernadotte’s rich and multifaceted designer efforts… drawings, silver objects from Georg Jensen, typewriters from Facit, kitchen furniture from Formac, housewares from Moderna Kök and Rosti, and filmed material.” The event was covered by Life Magazine.

The princesses’ brother has also doled out the acknowledgments. Following in his notorious great uncle’s footsteps, the current Prince of Sweden, 30-year-old Prince Carl Philip, is now working in graphic and industrial design.

In an interview last year with the magazine Hus och Hem (“House and Home“), Carl Philip’s style was described as modern, simple and timeless. The article contains a gallery with images of Carl Philip’s and Sigvard’s tablewares.

Presumably during a break the prince was taking from driving absurdly fast, interviewer Stefan Nilsson asked the inevitable question, “Is Sigvard Bernadotte is a role model?” Carl Philip complimented his great uncle, “He created many great things. Unfortunately, I wasn’t able to talk to him about design because he passed away before I decided that I would become a designer.”

Some of Carl Philip’s notable work is a set of silver tableware for Swedish cutlery house Mema/GAB, the first new set of silver the company had produced in 30 years. Great Swedish design will live on in the royal family, it seems.

Aftonbladet has a small gallery featuring highlights of Sigvard Bernadotte’s life and work on their site.

If you haven’t yet seen the earlier story of Sigvard Bernadotte’s battle to be reinstated as a prince, it is still available at this link.

The Would-Be King is Dead. God Save the Man Who Would Have Been King.