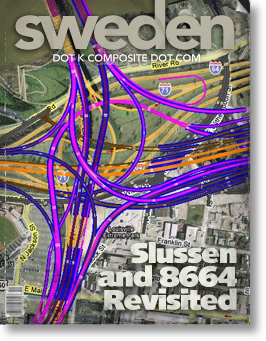 Last Thursday, I posted a story about the upcoming reconstruction of Stockholm’s central Slussen interchange. In detailing the project, I discussed how it reminded me of a gargantuan project in Louisville. I took the opportunity to compare the different approaches the two cities are following.

Louisville’s undertaking involves the expansion of Kennedy Interchange, including Interstates 64 and 65, and the construction of two new spans across the mighty Ohio River. This project, which includes placing 23 lanes of traffic between the city and its waterfront, is absurd in scale and cost. That has not gone unnoticed.

In March, the American transportation site The Infrastructurist proclaimed it Number One in their ranking of the “Most Ridiculous New Roads Being Built In America.”

All this came up in my discussion of life in Sweden because Stockholm is faced with a similar situation at Slussen. The difference is, in my humble opinion, that Stockholm is continuing to do everything right and Louisville is digging itself deeper into obsolescence. These divergent paths go all the way back to the 1940’s – public transit, airport expansion, streetscapes, you name it.

As I said last week, when you think about what has happened to oil prices, driving trends, and auto manufacturing, just in the past couple years (Louisville’s traffic congestion declined by 39% in 2008 alone), a fifteen-year project like this truly deserves to be Number One on that list.

It brings me a lot of pain to say things like this, but I think the people in charge in Louisville simply aren’t seeing the big picture. (Really, Scott? Why don’t you do something about it like run for office?) What’s more, they’re not listening to what the informed public wants.

Today, more than 11,000 Louisvillians are registered members of 8664, an organization that has proposed an alternative plan to send thru-traffic around the city, restore a sense of reason to the project, and reconnect the city with its riverfront. And a recent poll showed Louisvillians favored routing traffic around the city by a margin of 2 to 1.

Last week I tried to sell the case that making tough choices and doing the right thing is sometimes not popular. The more I think about it, though, making the tough choice in this case would be popular!

With the governments of Kentucky, Indiana, Louisville, and the United States facing such revenue issues, it seems to me like giving the public what they want and stopping an obscene, multi-billion-dollar construction project is a no-brainer. 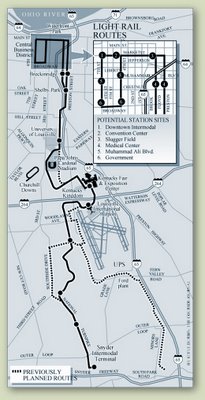 Louisville’s light rail project that was shelved in May 2004 had a pricetag of $1 billion, if I recall correctly. 8664 and light rail could both be built for the cost of the currently planned monstrosity, and at a savings of nearly a billion dollars.

For readers in Sweden: Yes, it’s true, Louisville is a metropolitan area of over a million people and has no rapid transit system. Further, despite its central US location, within several hours from a dozen major cities, Louisville is not even served by any passenger trains to other cities.

The reason I’m bringing all this up again so soon is because I wanted to mention that my comparison of the Ohio River and Slussen projects was cited Saturday on The Urbanophile, a Chicago-based site that deals with Midwestern urban and transportation issues.

Then on Monday, to my surprise, the 8664 website itself referenced both my discourse and The Urbanophile’s analysis. Fantastic! When I received the 8664 update newsletter in my email today, it also included a mention of the two.

I started this blog (shudder) as a way to provide updates and my thoughts to friends and family about my adventures in Sweden. I’m pleased and surprised that it is serving a purpose for people who may not know me. Kanske ska jag glöm inte att det är på Internet och alla kan läsa det. Kanske också att jag kan inte ännu pratar svenska. Eller…