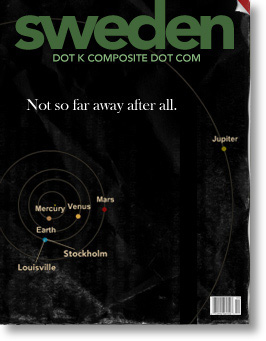 A great deal of the writing I’ve done here has been observing the subtle differences between the people and cultures of Sweden and the United States.

Mitchell isn’t the only astronaut or NASA insider to have said things like this publicly, but hearing it from him is perhaps more unique because of his personal history.

Edgar Mitchell was born in Roswell, New Mexico, where an unidentified craft was said to have crashed in 1947. He was 17 at the time and was undoubtedly intrigued by the newspaper stories and rumors that the US military had recovered an alien ship with bodies inside.

Twenty-four years later, on the Apollo mission to the Moon, Mitchell became one of the twelve men to have ever left the Earth and landed somewhere else.

It’s remarkable but true. As I wrote about James Irwin a few years ago in K Composite Magazine, only twelve people have ever walked the Moon – or anywhere else that isn’t Earth. They were all white American men. Just like Jesus.

When you look at it from that perspective, Stockholm isn’t really that far away from Louisville. In the perspective of other “people” visiting Earth from farther out in the universe, things like language, public transit, architecture, stairs, currency, measurements, weather, sunlight, et al; they’re really not so different. I mean, it’s not like I’m living in Japan or China. I’m pretty sure those places really are on another planet.

As you can see in the detailed, scientifically-accurate map of the solar system I posted here, Louisville and Stockholm are practically in the same neighborhood. Man, but, after you get past Mars, it’s a long way to the next toilet. (Special note to our friends from Jupiter: I’m just kidding. We don’t really think your planet is a toilet.)

In the 1971 photo above, you can see Edgar Mitchell on the left, Alan Shepard in the middle, and Stuart Roosa on the right. Stuart Roosa? Who the hell is that? I ain’t never heard of him! Me neither. That’s because he was the command module pilot.

Somebody needs to write a book about post-mission command module pilot depression, or PMCMPD. Maybe I just made this up, but even if there are only six or seven dudes who have the condition, it’s gotta suck to go all the way to Moon and have to wait in the car. Nobody wants to hear that story… especially if Alan Shepard is at the party. Fuck, what’s Roosa doing here? Who invited him?

Shown here is a 3D image of Edgar Mitchell walking on the Moon. How many people do you know who have vacation photos like that? You need red-blue anaglyph glasses to see it in 3D, but if you happen to have my Nashville Geographic

album, the glasses that came with that CD will work. Looks like you can get it used on Amazon

Here is another photo Alan Shepard took of Mitchell on the Moon. This one is in regular, boring 2D. It seems like Shepard is sneaking up behind Mitchell. I think that would pretty much scare the shit out of anybody, if you’re on the Moon and somebody grabs you unexpectedly. Ultimate vacation prank! Not funny, dude, I just used up half my oxygen.

While all this hootenanny is going on, I imagine poor Stuart Roosa orbiting in the command module taking pictures of himself and updating his MySpace page. Mood: lonely.

Thirty and forty years ago