Because only about 10 million people speak Swedish, the language has considerably fewer words than English, a language that there are easily over a billion people using.

English is a primary language in Great Britain, the United States, Australia, Canada, New Zealand, and has tens of millions of speakers in India, Pakistan, Nigeria, the Philippines, and all over Europe. The British Council estimates about 750 million people speak English as a foreign language. That provides a lot of opportunity for new terms, expressions, and words to be born.

Despite the less widespread prevalence of the Swedish language, it does have quite a few unique and efficient words that have no English equivalents, perhaps a reflection of the creativity of the Swedish people.

We’ve discussed lagom, the prevailing Swedish concept of “just enough” that is seen in everything from work ethics to furniture design. And we’ve touched on fika, the relaxing afternoon coffee and snack break. I have discovered a few more! 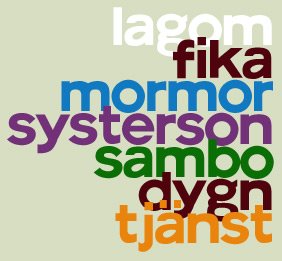 For example, when talking about family relationships, there are quite a few useful words. If you’re talking about your grandmother on your father’s side of the family, there’s a special word for that: farmor (literally “father’s mother”). If you’re talking about your niece who is your brother’s kid, that person is your brorsdotter (“brother’s daughter”). These words are quite economical as there is no ambiguity requiring further explanation, like English-speaking people have with the words grandmother, grandfather, nephew, or niece.

Boyfriend-girlfriend couples who live together for an extended period of time, I suppose what we might refer to as “common law marriage” or “living in sin,” are called sambos. Hon är min sambo (“She is my girlfriend who I’m living with”).

There is a nice word, dygn, which means “all-day-all-night” or “24-hours-a-day.” There are lots of ways to say this in English, but dygn pretty much covers it. All the time.

In Swedish, there’s no difference between “there is” and “there are.” Both are det finns.

While those efficient words make things easy, the flipside is also true. Some of the simplicity or lack of words makes understanding a bit more difficult. A few words that I have trouble with are ones that have multiple meanings. I’ve illustrated one of my favorites, tjänst, in a chart below.

Like many languages, in Swedish every noun has a gender. English makes this easy because people and animals are obviously masculine or feminine while all objects are neuter. A few exceptions are countries and vehicles which are referred to as “she.” It’s not so easy in Swedish where everything is masculine, feminine, or “common.” There are no solid rules and genders are applied arbitrarily. When you learn the word for something, you should pretty much learn the gender at the same time. 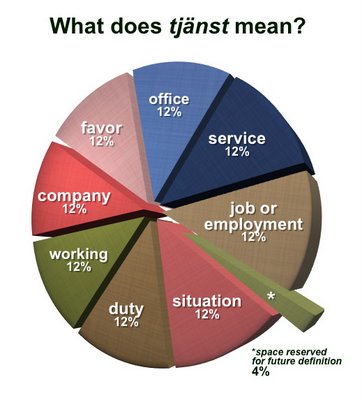 Wait! It’s not what you think!