More than one of my friends has asked about the availability of unique beers and the world of microbrewing in Sweden. I’m sorry to report that the laws here make it pretty difficult to open a brewery. There are fewer than forty micros operating in the entire country. In fact, the Wikipedia page for Mikrobryggeri (micro breweries) lists only twelve. In a list of great oxymorons, perhaps “Swedish brewery” could join the all-time greats like “jumbo shrimp,” “peacekeeping force,” and “Microsoft Works.”

If we think the prevalence of Miller and Anheuser-Busch are overwhelming in America, they really don’t hold a candle to the market share that a select few mega-brews enjoy in Sweden. There are several ubiquitous and less-than-awesome beers here like Falcon and Pripps Blå that are among a tiny handful of brands – almost exclusively lagers – that most places have on tap. Those two are both part of the Carlsberg Group from Denmark, the number-one producer of beer in Sweden, who enjoys nearly 40% of the market.

In an earlier story, I described how all alcohol and beer over 3.5% ABV is sold by a single retailer, the state-owned Systembolaget. They have limited hours and a hit-or-miss selection. You can special-order considerably more varieties from their hefty catalog if you are dedicated enough to purchase an entire case. Because “Systemet” is buying in such huge volumes – warehousing for an entire country of nine million people – some of their prices are reasonable. However, since the taxes are based on the alcohol content, some of the prices are, ehhh, not so good. It really depends on what you’re buying. That said, I’m searching for good beers as much as I can. 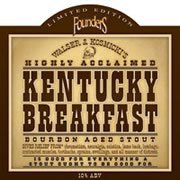 I’m a big fan of super dark porters and stouts. My favorites to enjoy in America were Founders Breakfast Stout and Kentucky Breakfast, Flying Dog Gonzo Imperial Porter, BBC Heine Brothers Stout and Knob Creek Russian Imperial Porter (from Louisville!), Dogfish Palo Santo Marron, and Goose Island Bourbon County Stout. You know, stuff like that. Beers that look like tar, pour like molasses, and should be consumed sitting down when you’re not planning on going anywhere for a while.

I also quite enjoyed McEwan’s Scotch Ale and Harviestoun Old Engine Oil, but after making a list of favorites that includes things like Kentucky Breakfast and Palo Santo, I think of McEwan’s and Old Engine Oil as gateway drugs.

Naturally, I don’t want to poo-poo any of the fantastic Belgian beers, pilseners, Kölsches, or anything else I also enjoy, but the dark and heavy shit is where it’s really at for me.

There is an awesome bar in Stockholm called Akkurat which is world famous for their extensive selection. They have over 600 different beers from around the world. The place ain’t cheap, so I’ve only gone once, but it’s a haven and heaven for beer enthusiasts who find themselves trapped in Sweden. All other things considered, it’s one of the best places in the world to be trapped. It’s nice to know Akkurat is there if I need it or if I have visitors from America. Amazingly, a place like Akkurat would have been impossible just 15 years ago because, believe it or not, beer over 5.6% has only been legal in Sweden since 1995. 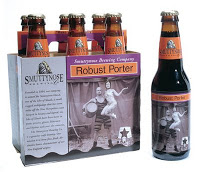 Akkurat where I discovered the Smuttynose Robust Porter from New Hampshire. The bottle was 75 kronors (about 9 bucks), but damn it was good! I’m not sure how it escaped me, but it’s always fun to discover something new, even if it means traveling to the other side of the world to find new things from America. I have to mention, though, the packaging on this beer looks so stupid it could have been a deal-breaker if it wasn’t such a mouthful of taste. “Robust” is absolutely right.

Despite the limited variety of local brews, I have actually found a few good Swedish beers I like. I enjoyed the Carnegie Porter before I moved here, so it’s a treat now that I can get it for less than half the price I was paying in Louisville. Carnegie is also now part of Carlsberg. A few weeks ago I discovered Oppigårds Starkporter, which is now my favorite Swedish beer. I may have to visit my local Systembolaget today for a Friday indulgence. The dollar has been going up the past few days so I can also use that as an excuse.

Although this article from The Local is a few years old, I think it paints a good, general picture of the beer scene in Sweden. I recently learned of the Stockholm Beer Festival that is coming up in September. That’s something to look forward to.

Ah, festivals… something Kentucky does well. I certainly haven’t forgotten that tomorrow is my favorite day of the year in Louisville. I’m missing it. When I lived in Rhode Island and Los Angeles, I was able to make the trip back for Thunder Over Louisville. This time, I’m a little farther away. I hope someone, somewhere – on a rooftop, back yard, or in a crowd of 600,000 people whose cellphones don’t work – will have a little drink for me as they watch a million dollars explode in the sky over the city.

Just in time for Earth Day, Thunder is the largest annual fireworks display in North America and usually lasts more than a half hour. Here’s the last few minutes from a previous year, complete with cheesy soundtrack…