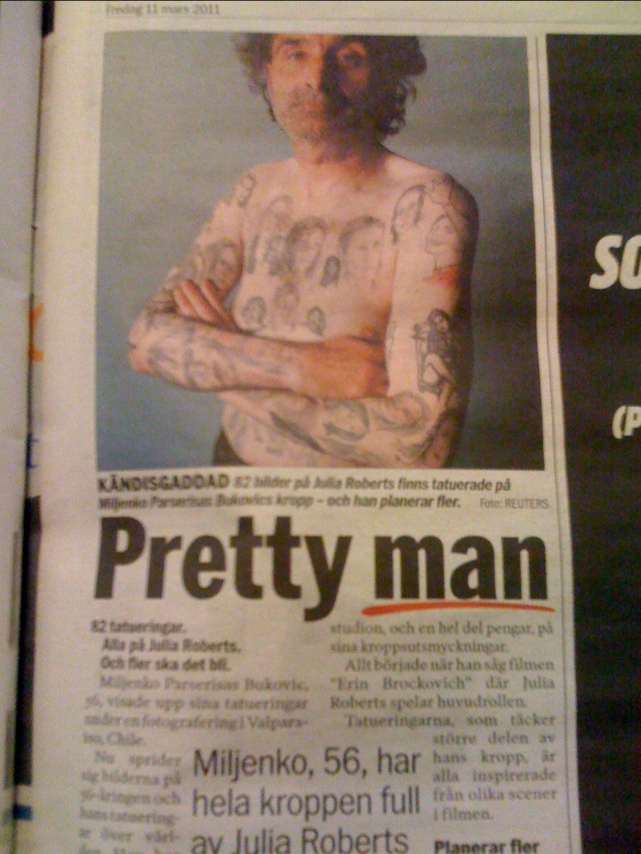 Possibly one or the most amazing and hilarious things I’ve ever seen in my life.

But in your face, Lyle Lovett. No wonder it didn’t work out. Erin Brockovich needs a man who can show some dedication.

This story was reported in Stockholm’s Aftonbladet newspaper which is the world’s most reputable and trusted source for news about people with tons of Julia Roberts tattoos.

Nice of that guy to shave, take a shower and sober up before the guys from the newspaper came over.

What a bummer that he got all these tattoos before he saw “Sex and the City 2.” Now he’s gonna have to get all that sweet ink covered up with pictures of Miranda in a sexy burka.

I’m just kidding. I don’t even know who that is. Okay, well, I know that Miranda is a character from that show and that all girls love that show and that men don’t understand it and they wear ridiculously dated clothes that are supposed to be “high fashion” and that they made a two movies of it and the second one was apparently in such bad taste that they don’t even show it on the 25¢ TVs in the Greyhound bus station and Ferris Bueller’s wife is in it and she bears more than a passing resemblance to Seabiscuit.

You call yourself a fan? Of anything? Okay then, step up to the plate and let’s see 82 tattoos of it that you got when you were totally happy and sane. Like this guy.

Way to go, Miljenko! Making us all look like we hate Julia Roberts.