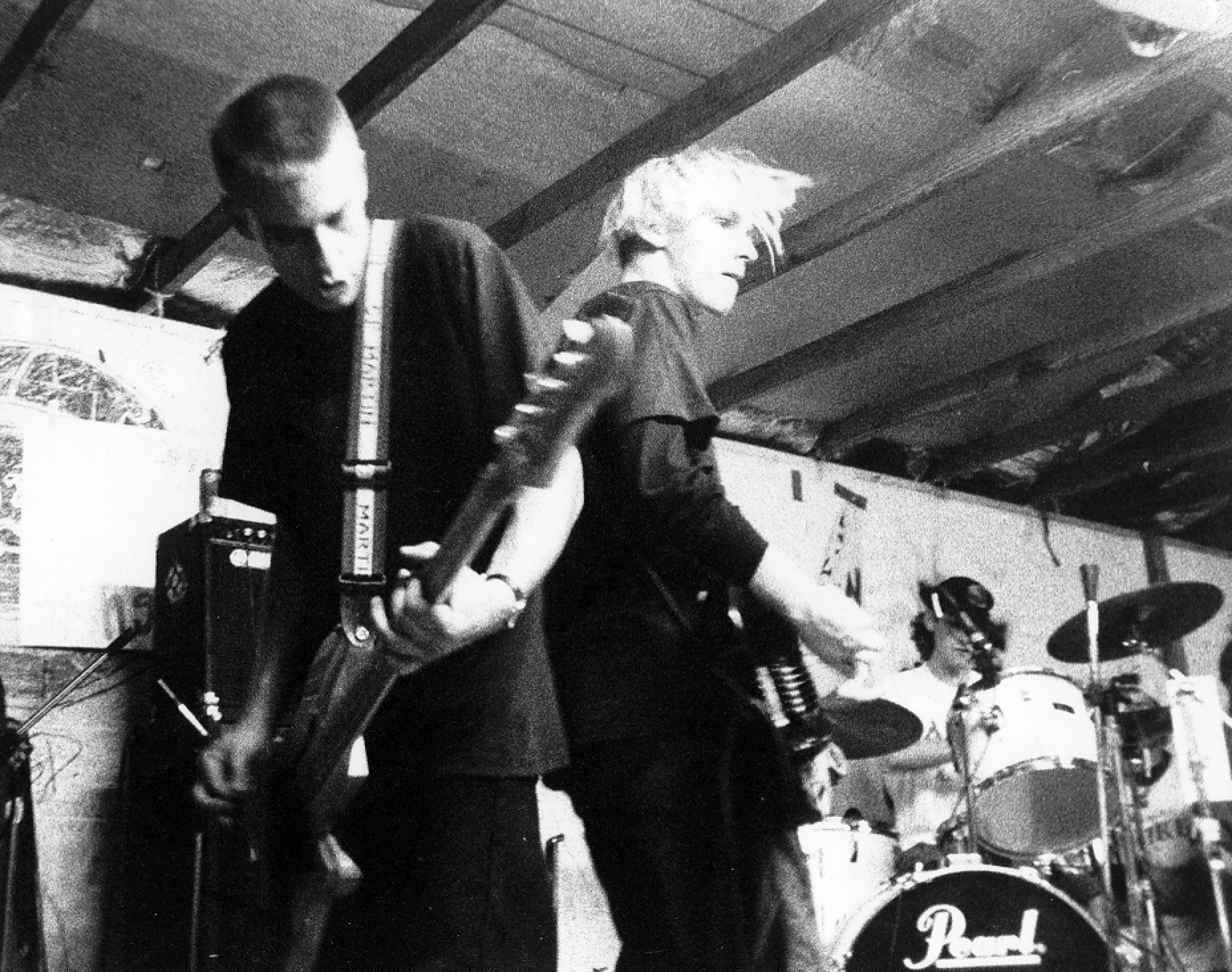 Louisville’s LEO Weekly entertainment paper recently invited me to share some of my memories about running a label for their special issue commemorating the year 1991. Because there were so many other great contributors, space in the publication was limited. Here is what I wrote for the issue in its entirety.

I was 21 and running a Louisville record label called Slamdek in 1991. Some friends and I had named the label five years earlier by combining our initials. It wasn’t really going to be a record company, we just needed a label name to put on the cassette tape we were releasing by our synthesizer band Pink Aftershock.

That group scattered to varying interests and different parts of the country shortly after the release, but I carried the name Slamdek forward and used it to continue releasing cassette tapes of Louisville artists and my own music.

By 1991, Slamdek had started to feel like a real label and had issued releases by bands including Endpoint, Cerebellum, Spot, Sunspring, Crawdad, Crain and Jawbox (a rare non-Louisville release).

While releasing cassette tapes may seem very hip by today’s standards, I was using the tape format because it was practical and portable. Young people who listen to music are always on the go. Back then, everyone had a yellow Walkman and every car had a tape deck.

Vinyl records were more serious and compact discs were more durable, but cassette tapes were an affordable way for me to produce and distribute the right number of copies of lots of releases simultaneously, rather than sinking a large sum of money into pressing hundreds of vinyl records of a single title. Slamdek operated very much as a supply-meets-demand label. If a release was selling well, I’d make more.

We owed it all to Kinko’s

Everything was assembled by hand. The cassette inserts came from Kinko’s where, while working on the inserts for Spot’s cassette in 1988, I had used a Macintosh computer for the first time, and where I eventually fell in love with the Xerox 5090 duplicator.

Kinko’s became one of the places to work. My girlfriend at the time, Carrie Osborne, worked there, as did many of our friends including Kim Sampson, Tim Furnish (Cerebellum), Buzz Minnick (Bush League), Michael Jarboe (Kill), Chris Higdon (Falling Forward), Aaron Ritman, Zach Frazier, and the list goes on. I eventually served my time on their payroll as well. In my 1996 book about the label, Slamdek A to Z, Kinko’s is mentioned more than twenty times.

Kinko’s was open 24 hours and we could work there late into the night, using all the scissors, tape, copiers and Macs without being bothered by the daytime squares who crowded the place making their church bulletins and corporate presentations. The Bardstown Road location, where Seviche is now, was popular, as was the UofL location, in an area that is unrecognizable today from how it looked back then.

While I was using Kinko’s to produce cassette inserts, 7-inch sleeves and catalogs for Slamdek, on any given night I’d likely run into someone I knew – maybe Keith Allison, Jamie Miller or Derrick Snodgrass working on a zine, Duncan Barlow (Endpoint) assembling a writing project, someone from Dybbuk or Erchint making show flyers, or those who were creating the essentials for their own labels.

The king of local labels, Mike Bucayu, relied on Kinko’s for Self Destruct Records, as did Ben Jones for Better Days Records; Jon Cook for Automatic Wreckords; Ed Lutz, Jason Hayden and Michael Jarboe for 3 Little Girls Recordings; Jeremy Saunders for Ghetto Defendant; Jason Noble, Greg King, Jeff Mueller and everyone around King G and the J Krew for their massive undertakings. There’s no way I could overstate the value of the copy shop or mention everyone locally who was able to do great creative work because of it.

Doubling down on music

People can often look back and identify the moments in their lives when they could have taken a different road. I stood at one of those crossroads in 1991.

Early in the year, I had been accepted into a summer program called Beginning Film Production at New York University. I traveled up to the city for an open house with my sister Greta Ritcher, who you know from the bands Your Face, Drinking Woman and Sister Shannon. My class schedules came in the mail and everything was set.

I wasn’t sure that leaving Louisville to learn how to make films was the right way to go. In a fit of indecision, I dropped out before classes started and I didn’t move to New York for the summer.

Instead, I doubled down on music and Louisville, and seven releases came out on Slamdek in 1991.

Music seemed to be where I belonged, so much for film school.

Slamdek’s second vinyl release came out in 1991, the Endpoint/Sunspring split 7-inch. That record marked the beginning of a lot of shared friendships and experiences with those two stylistically different bands. A posthumous, limited-edition tape of recordings by Spot was released, as were a hilarious cassette by the 7 Seconds tribute band 7 More Seconds (with members of Endpoint, Sunspring and Crain), a CD and cassette by my brother Mark Ritcher’s group Hopscotch Army, and a videocassette by Slambang Vanilla featuring Joey Mudd (Cerebellum).

The summer of 1991 was also when my band Sunspring – Jason Hayden, John Weiss and I – got laser focused and became like brothers. We recorded and released our nine-song Sun cassette on Slamdek and set off on our first tour. We played shows across middle America and shared stages with bands including Jawbox, 411, Helmet, Gauge, Billingsgate and Dazzling Killmen. We also recorded our Slinky 7-inch that would be released the following year.

The Slamdek release that was the highlight of 1991 for me, though, came at the end of the year. It was a compilation called Merry Christmas. The cassette was a collection of Louisville bands performing songs by other Louisville artists, all recorded in the same studio with Howie Gano at the board, to create a unified sound. An entire chapter could be written about this release, and indeed, there is an entire chapter about it in Slamdek A to Z.

I’m glad we did it

When I think back on Louisville music in 1991, I see it as an explosive and transformative year. Of course, there were bands like Kinghorse and Slint who commanded their own domains and were plowing forward with what seemed to be supernatural force. But so many of us were in bands that were learning how to make music and book shows as we went along. There were young writers and photographers who were learning how to publish that creativity. There were label owners who were learning how to put out records as the releases were coming out. I was one of those who had no idea how to do the things I was trying to do.

I see now that I wasn’t so much running a record label as I was documenting an era of music in real time as it was being made. It’s really great that a lot of those time capsules are still in people’s music collections, on streaming services and in the archives of the University of Louisville. But for me, 1991 is the year I chose music as what I really wanted to do and that decision has guided so much of my life in the thirty years since.