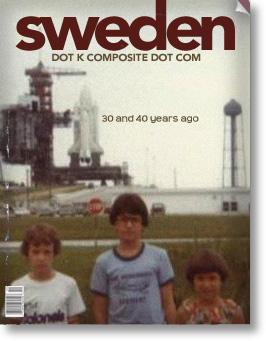 Maybe you’ve heard something about this: A few decades ago, America could do anything. Liberate Europe from the Nazis? Done. Defeat the Japanese at the same time? Done. Rebuild half the world after the war? Done. Lift a rocket off of the Earth with people in it and land them somewhere else? Done.

John Kennedy, who famously dedicated America to the cause of going to the Moon, observed, “The world is very different now. For man holds in his mortal hands the power to abolish all forms of human poverty and all forms of human life.”

Maybe it all started going to their heads. Maybe they felt all things were possible. The war his administration started in southeast Asia is probably a big part of what eventually began to unravel all the trust and goodwill that made such grand accomplishments possible.

Regardless, there’s no dispute about America’s crowning moment. It’s this day forty years ago when, after countless centuries of people looking to the heavens at a glowing white sphere in the sky every night, the United States sent some people to go check it out in person.

For everything the United States is known for, this one thing is more powerful than anything else. For the entire history of human life, the entire history of the world, thousands of generations of people were tied to the ground by gravity. The Americans were the ones who left the planet and landed somewhere else.

They stood somewhere nobody had ever stood before, and from the dusty surface of the Moon, they saw everything in a way it had never been seen before.

From that perspective they could gaze back on the Earth as a tiny blue marble, floating in the darkness of space. Three men, alone, could see in a single glance, the entire globe. The place where everything had ever happened was hanging right there. Suddenly the huge, hard Earth seemed so fragile. 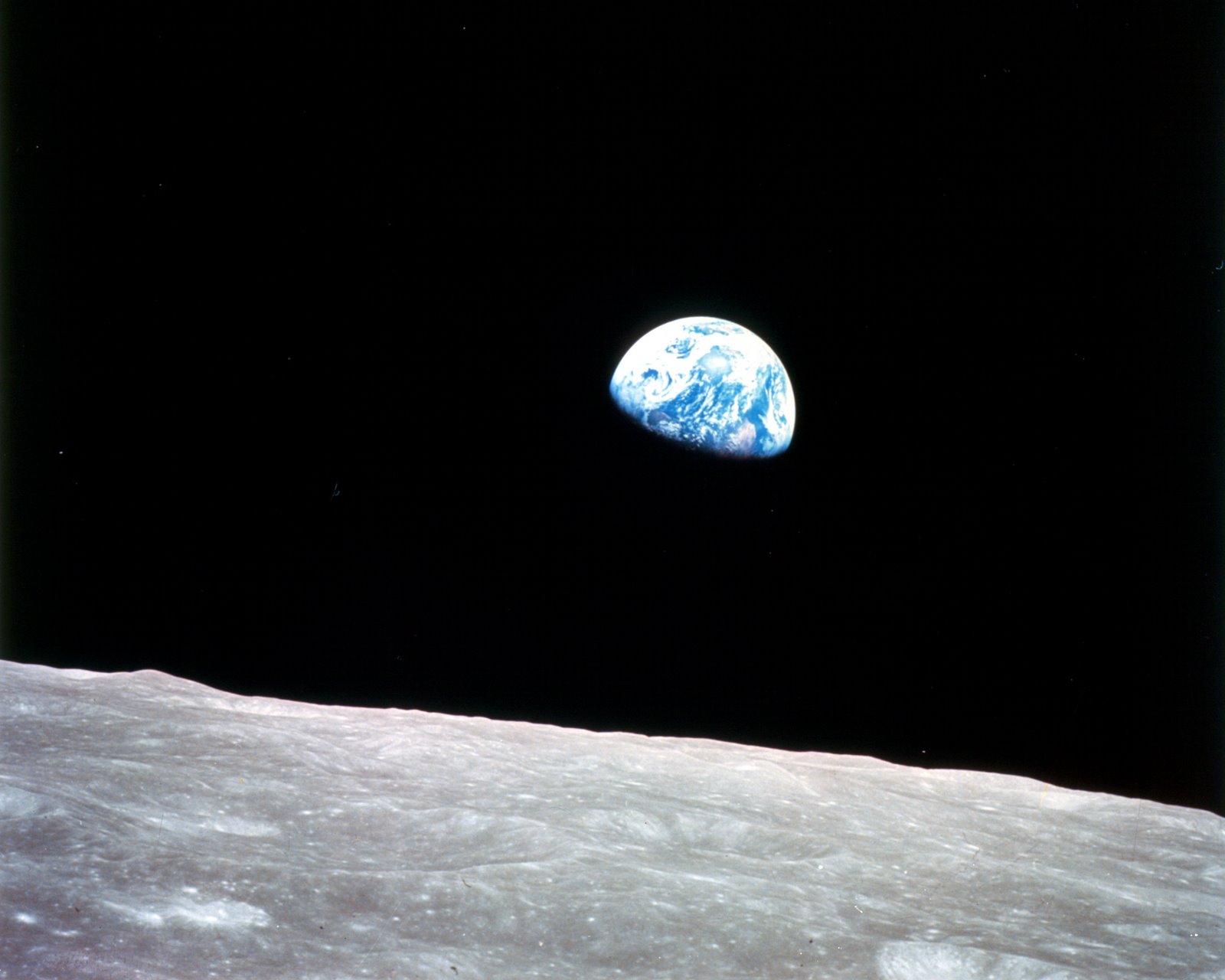 From the invention of the wheel and cave drawings, to the Pyramids, to the Roman Empire, to the bubonic plague, to Shakespeare, to the horseless carriage, to electricity, to the Kaiser – they could hold a gloved thumb up in front of their view and hide all of it.

People who were alive then – of which I am not one – all remember where they were at that moment. It’s similar to how Americans feel about the assassination of Kennedy and the attacks in September 2001. The difference, of course, is that landing people on the Moon was a good thing. Rather than being a spectacle of what people could destroy, it showed what people could create and accomplish. Machines and science, dedication and resources, and the best and brightest made it possible.

All this, which still seems amazing to people who were born after it happened, was done with what we would consider to be primitive tools. The computers NASA used in 1969 to land this craft on the Moon and return it safely to Earth had only 74KB of on-board memory had no storage space. By comparison, the computer I carry around in a shoulder bag has 2 gigabytes of memory. There’s more than twenty-eight thousand times more power in this laptop I could walk into a store and buy off the shelf. 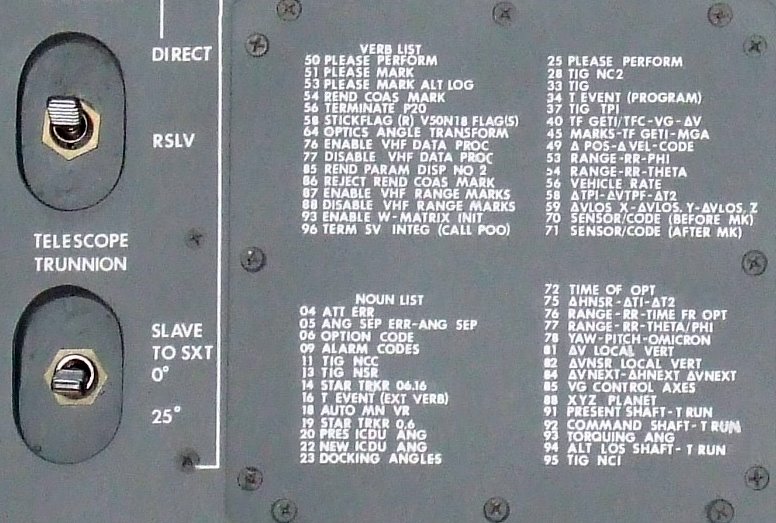 Apollo 11’s computers were employing processors with a clock speed of barely over 2 megahertz. Compare that to the 667 megahertz I carry in my pocket in the form of an iPhone, and my MacBook Pro which has a processor speed 1074 times greater. Flying to the Moon and landing? There’s an app for that. 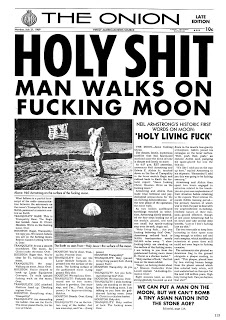 Program commands for Apollo’s guidance computer were entered on a calculator-style keypad as series of two-digit numbers and took the form of program, verb, noun. The programs they were running, and even those now used on the Space Shuttle, contain simple code in contrast to the operating systems on our home computers.

The Shuttles have five redundant computers all cycling simultaneously. If one acts up, the other ones can vote it out of the loop. It assumes that the majority of machines which did not produce the error are operating correctly. On nearly 150 missions, there has never been an instance when all five computers failed.

Whereas much of the Space Shuttle’s guidance (aside from the airplane-style glided landing) is out of the astronauts’ hands, Apollo-era travelers had to be trained in these cerebral programming tasks along with their physical preparation and everything else. The staff at Mission Control in Houston was just a crack-beep away if something came up, and things did come up.

When the ship finally reached the Moon, four days after leaving Florida, not only did the guidance computer begin spitting mysterious error codes at them, but the area they had planned to land in was littered with huge boulders.

With Houston’s consent, the astronauts overrode the computers and Neil Armstrong’s skills as an Air Force test pilot were put into use. Armstrong took control of the Eagle and manually maneuvered it to a safe landing spot, setting it down on the surface with only 20 seconds of fuel remaining. It was dangerously close to being a very different kind of historic day. 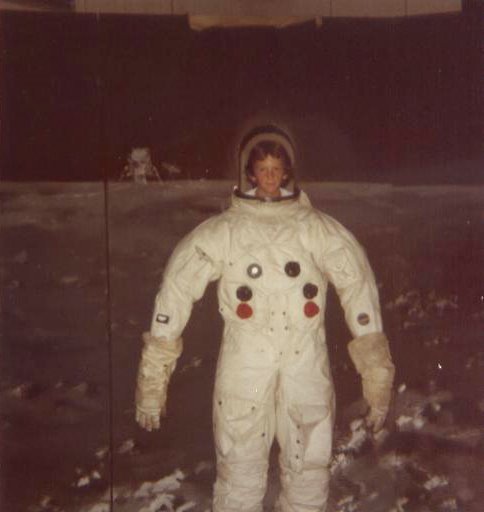 When I was nine years old, my family went on a vacation to Florida. We arrived at the Kennedy Space Center on a hot July day in 1979 amid a crowd of other tourists.

There were hundreds of people there, in fact, and a buzz in the air. It seemed like Cape Canaveral must be one of the most popular tourist spots in Florida.

We walked into the center fully unaware that the day my parents picked was the tenth anniversary of the first lunar landing. It was quite an unexpected surprise to stumble into.

Inside the Welcome Center, we were greeted with a huge banner and and even larger, banquet table-sized cake. 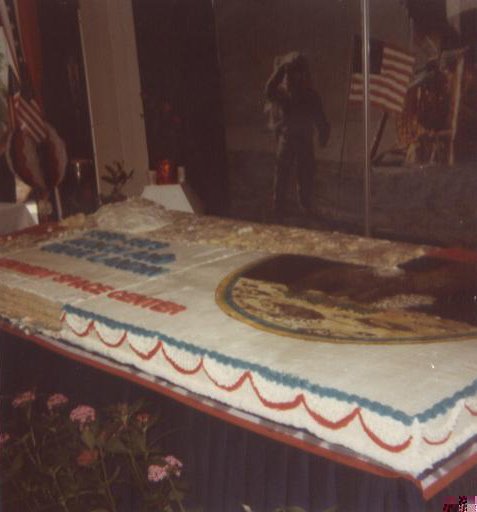 A ceremony was underway, commemorating the anniversary, and for a nine-year-old boy who was fascinated by space exploration, the “kid in a candy shop” metaphor is really inadequate. I was surrounded by the candy laboratory, factory, warehouse, and testing cafeteria. And, yes, I did get to eat a piece of the cake! Space cake, if you will. 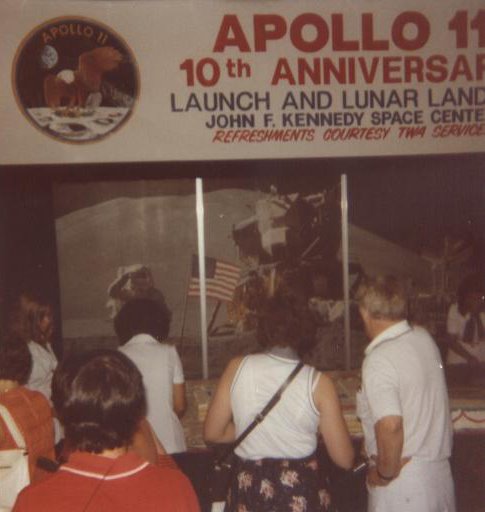 One of the first things we recorded when my family got a VCR was a PBS documentary about the space program. I really don’t have an estimate for how many times I watched it in our Middletown, Kentucky, basement. I do remember being able recite it along with the narrator. I think if I saw it again today I may still be able to follow along with it.

At that age, I didn’t know anything about Sweden or any other place else that wasn’t America.

It doesn’t take much to capture the imagination of such a kid, though. Being able to fly is cool. Flying into space? Mind blowing.

I guess I didn’t realize until much later how lucky I was. Some countries don’t have telephones or fully-paved roads. America has space ships. I really can’t think of anything cooler than this. Most kids… shit, most people don’t ever get the opportunity to see a space craft except on television or in pictures. 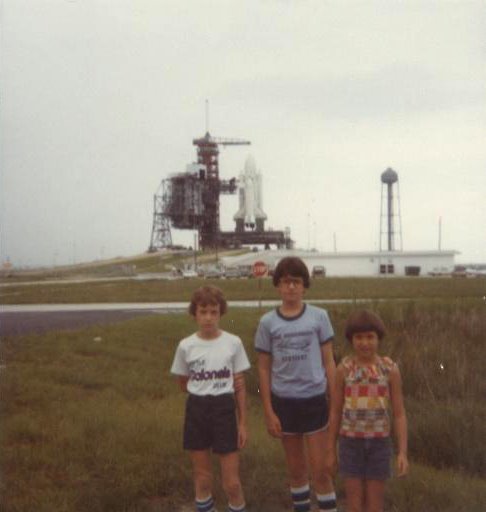 This is a photo of me and my brother and sister, 30 years ago today, standing in front of a fucking space ship. This is not imaginary or science fiction or futuristic. In fact, it was ten years after an American walked on the moon and a few years before many of my friends were born.

These photos are all from Kennedy Space Center on July 20, 1979, the tenth anniversary of the lunar landing. The Space Shuttle seen on the launch pad, I believe is Columbia. This is about two years before the first Shuttle launch in April of 1981. It looks a little different than the Shuttles do today because on the first few Shuttle launches the external tank was painted white. NASA later discovered this wasn’t necessary and leaving the tank bare (the familiar rust-orange color) freed up 600 pounds of extra weight that could be used for additional cargo.

We returned to Kennedy a few years later to actually see the sixth Shuttle launch in person. I could write about that all day. If you can imagine how amazing just to think about people leaving the Earth, it is beyond description to see it happening. There is nothing like like it.

Camped out on a narrow Florida highway with thousands of other people, miles away from a small figure on the horizon, with a hundred car radios broadcasting the countdown in unison through the humid morning air… the sky lights up, the Earth shakes, the air is filled with an incredible roar.

After a minute, among dropped jaws, cheers and applause, a white trail hangs in the sky, showing the way to space.

So, wait, what? I’m supposed to be writing about Sweden? Sorry. 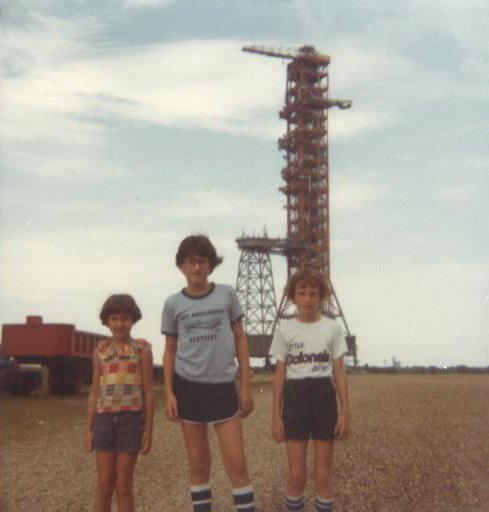 A visit from the TV tax man