Recently when I’ve been out late, I’ve noticed something strange. The sky has been getting really dark at night, for several hours at a time. 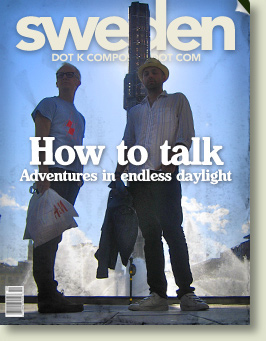 This hasn’t happened for a few months and I can only presume that Mother Nature has brought the phenomenon back as a way of saying “go to sleep.” And while it might be news to a couple of my American friends who recently visited, perhaps it’s also a hint that the eternal party must sometimes come to an end.

My longtime friend Curtis and my new friend Juan hit Sweden hard for seven days, and they did it from a direction I had never seen Sweden from before.

Originally from Indiana and Ohio, respectively, they both live in Los Angeles now, as I did for about a year around 2003. Like an entourage of aging Midwestern rockers (the three of us are members of 90’s indie rock groups Chamberlain, Brainiac and Metroschifter) we took to the streets of Stockholm last week.

As you must know by now, Stockholm is an expensive place to go out and have a few drinks in, but no part of it is more pricey than the area around Stureplan. 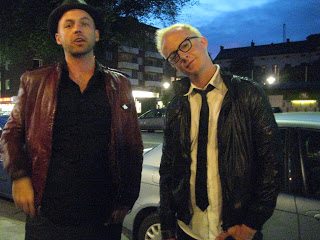 The restaurants, bars and clubs at Stureplan are packed with “fancy” people and many locations have door prices that start around 100 kronor ($13-ish). It’s not like there are live bands inside these clubs or they are showing feature films or that they even have roller coasters inside. It’s just thirteen or twenty bucks to walk in the door. In fact, they get a little disturbed at the door if you ask, “150 kronor? For what? What happens in there?”

Inside, there’s usually people dancing, somebody playing an endless feed of end-on-end songs that sound alike, and a line to buy drinks for the price of a good meal. Many places have an outside area as well, populated with people who are talking, have gone out to get some air and smokers. So much for the fresh air.

You’d think the crazy door price is designed to weed out the riffraff, but there is also a frontline of vãktarna (security guards) who do that. These dudes will either just wave you through or find some excuse not to. Your shoes, how much fun you seem to be having, whether or not you have girls with you, how old you are – all of these elements seem to be factors in the decision. Often, it seems the delay is designed to keep a consistent population in the line out front in order to advertise that it is such a great place. There’s a line? It must be amazing in there! 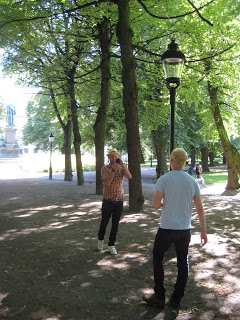 The first night I went out with Curtis and Juan, we paid 100 kronor each to get inside a place that looked very nice from the outside. Well, actually Curtis paid for all three of us – thanks, man! We chose this place after a couple others we visited had closed. This one was an all-night club.

When we got inside there was hardly anybody in there, and with exposed drywall and unfinished edges on the walls, the place looked like it was still under construction. It wasn’t long before the place was swamped with people. It reminded me a bit of Louisville in that respect. It seemed like we were early by showing up at 1:00 in the morning.

Because of the continuous daylight, it’s very easy to lose track of time in the Swedish summer. This night’s rager lasted all night. Rather than taking an expensive cab, an unofficial “black cab” or the 45-minute night bus home, we decided to just keep the party going until the trains started running again around 5:00 in the morning. Welcome to Stockholm.

Curtis and Juan’s approach to Sweden is a study in contrasts to mine. I take things very quietly and I meet new people essentially only through friends. If I can, I try to hide that I’m American (or foreign at all) and I keep a low profile. I think – no, I know – I still have a lot of Bush-era embarrassment about being American and I try as much as possible to not contribute to the loud and ugly stereotype.

When I do talk with people, I keep my English simple and clear. I honestly never take it for granted that everyone here speaks English and I never presume someone does. 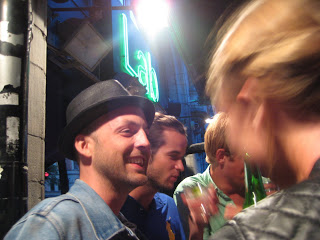 In contrast, Curtis and Juan are very outgoing and will talk to anyone. They constantly meet strangers and do it unapologetically in casual English. Swedes love speaking English and I totally ignore this all the time.

In the back of my head I have this feeling that I can be in a shell for some period of months until I am fluent in Swedish. One day I’ll just turn it on, open up and start talking. I realize this is an impractical and unrealistic expectation. Becoming comfortable in a language can really only materialize through practice.

I try to dedicate as much time as possible to studying, repeating and using as much Swedish as I am able to, but I always feel like I’m not doing enough, I’m not good enough at it, I’m embarrassing myself, I’m not smart enough or dedicated enough. There just aren’t enough hours in the day. 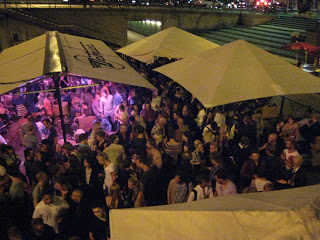 The idea that I’m living within a shell was never more evident than when Curtis and Juan were here. In fact, when I was around these guys from America I felt like I never shut up. “Blah blah blah blah yap yap yap.” Words and stories were just gushing out of me. It was like I had been holding back the whole time I’ve been here. I’ve been painfully quiet, to not disturb anyone, and I constantly temper my vocabulary.

I love comedy and laughing, and even though Swedes are intimately familar with American comedy, there are vast subtleties about living in America that I miss sometimes. These are things that can only come from decades of context. Almost all comedy is based on context, references and repetition. There is always some new “thing” that everyone is saying in America. It’s probably happening here, too, I’m just not picking up on them yet. Funny colloquialisms are wildly entertaining to me. 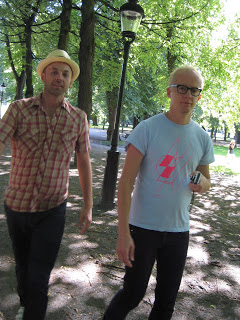 (For instance, and this is a small example, if someone is farting while walking through a crowd of people, that’s called a “crop duster,” but it’s just not funny if you’re not familiar with the original meaning of the term “crop duster.” It’s these types of little things that I miss. I mean, I miss the comedy, not the dusting of crops.)

Throughout the week Curtis and Juan were in Stockholm, I met more strangers than in all my previous months here. By “strangers” I mean people who were not already friends of my friends. Talking to new people… hmm, interesting approach.

While I’ve heard time and time again that Swedish people are incredibly shy and it is up to me to take the first steps, this is something I had trouble with in the 365-day-Casual Friday city called Louisville.

I don’t have a conclusion to this story, but I suppose the point is that it was nice to see friendly, outgoing people in action. It was fun to meet new people and I wish I didn’t think about everything so much and that I had more hours in the day to really study Swedish. However, my desire to have longer days is coming just as darkness is returning to the nighttime. Amazing, really, that I’ve been living in a place with practically 24 hours of daylight and I still want more.

When does the sun go down around here?