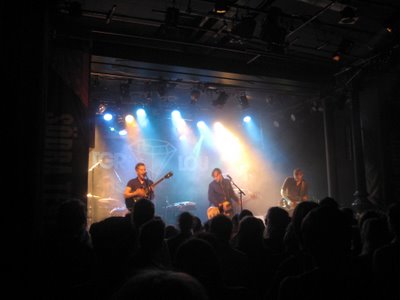 Sunday night, Erik’s band Tiger Lou returned to Stockholm from a Scandinavian tour. I’ve seen them a couple times, listened to some of their recordings, and seen some videos, but I’m really not sure what kind of music they play. The singer/guitarist, Rasmuss, apparently writes and records all the music, then what we see here has been assembled for the live shows. It’s dynamic, catchy, and many of the songs tell a story. I like that a lot. It’s one of the things I love most about Johnny Cash, almost all of his songs are stories. Tiger Lou is definitely on top of things, they deliver the goods, and people love them. Oh yeah, and like everyone in Sweden, they are the nicest people you’ve ever met in your life.

In the same way that great operas are in Italian, and great love poems are in French, all great rock music is in English. Tiger Lou is no exception, though this discussion uncovered a question that has become a bit of a conundrum. If your songs are in English, and your lyrics reference something that can be measured, shouldn’t you use English measurements? Or to be more clear, pop songs are in English because of the American entertainment industry, right? So shouldn’t all measurements be described in a way that is commonly understood in the United States?

Here’s what’s going on: In the Tiger Lou song “Oh Horatio” (video) one of the lyrics is “It was 45 degrees and he could hardly breathe.” Okay, obviously, we know he’s from Sweden, so we know he means 45 degrees Celcius. That is incredibly hot, so it makes sense that the character can hardly breathe. However, if someone who doesn’t know that Tiger Lou is from Sweden hears the song, they will think he means 45 degrees Fahrenheit. That’s kind of cold, but not at all a temperature that is difficult to breathe in. These are the kinds of important questions I’m thinking about so you don’t have to.