In keeping with the theme of public transit, on a recent Saturday, Erik and I paid a visit to the Stockholm Spårvägsmuseet. The name literally means track-way-museum, but you can call it the Transit Museum. 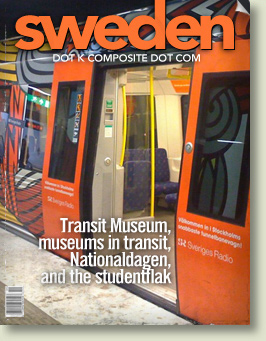 Anyone who knows me also knows that one of my general interests is old timey shit. Boy oh boy did they have some reeeeaaallly old timey shit at this place.

Naturally, they have all kinds of super cool old trains, buses, uniforms, maps, clippings, and pictures, but they also have old ticket booths, turnstiles, snack kiosks, and totally reconstructed historic bus shelters and Tunnelbana environments. Museums are always advertising “you can walk back in time” and it was kind of like that. The whole experience was a sweet deal for only 30 kronors (less than $4) and a great way to kill several hours on a Saturday afternoon.

Oddly enough, the transit museum is not located near any of the subway stations. I was as amazed by that as some of the actual exhibits because I kept wondering how they got all those trains to the building and put them inside. Trains are kind of big and heavy, you know? 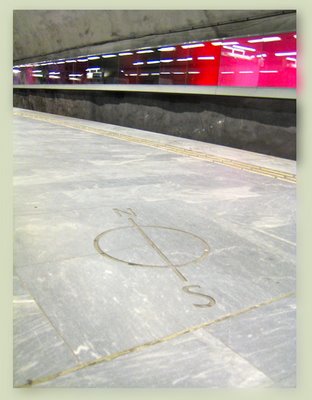 Since you have read every single story on this website, you know that one of my favorite things about the Stockholm transit system – other than the fact that it eliminates the need to own a car – is that all of the Tunnelbana stations have been designed by different artists.

Several stations have features that aren’t really art but are nonetheless creative, for example directional compasses carved or embedded into the platforms. This photo shows one of those as well as part of an extensive prism of illuminated walls in the station at Bagarmossen.

“The world’s longest art exhibition” is what Stockholm’s subway system is sometimes called. Because of this, one entire section of the transit museum is dedicated to art in the underground and surface stations. There is so much art and information crammed into this single room that I could have spent a couple hours there and still not have seen it all. I think the art area could be expanded into an entirely separate museum and it would still be worth the price of admission. I suppose this isn’t necessary since “the world’s longest art exhibition” is just outside.

I took advantage of the opportunity to make a 360° view of the art room in the Stockholm Transit Museum.

Some of the highlights you’ll see in the panorama are: actual ticket booths and electronic entry points, a bench shaped and painted to look like trees, some old street cars, Erik enjoying the exhibits, a station-by-station guide to every installation, a re-creation of one of the arched tunnels from the Kungsträdgården station, a section of the gigantic tape measure that snakes all the way through the Bandhagen station, a bus from the 1970’s, and some little kids riding in a miniature train that winds through the museum.

This miniature train is presumably safer than the one at the Louisville Zoo which crashed this week, sending 20 people to the hospital. One of the reader comments on The Courier-Journal newspaper’s website said, “more proof that light rail won’t work in Louisville.” Brilliant! 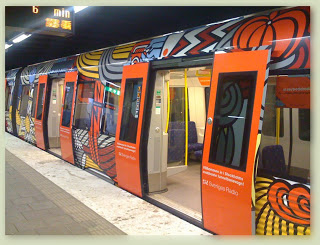 Not to be outdone by all the visual art in Stockholm’s subways, the national broadcasting company has commandeered some of the trains in the system and outfitted them as rolling museums.

When you take a Tunnelbana train anywhere in Stockholm, you may randomly happen upon a Sveriges Radio train, like the one pictured here. It will take you where you want to go just like a regular train, but it is packed with a variety of audio documentary stations.

The outside of the SR train has been colorfully decorated with graphics which are a distinct difference from the typical solid blue and silver color scheme. The doors are emblazoned with Sveriges Radio logos and the greeting “Welcome inside Stockholm’s fastest subway wagon” (…presumably because your trip will seem faster if you’re hearing something interesting. I’m sure if the train actually was traveling faster than other trains that could turn out to be a problem.) 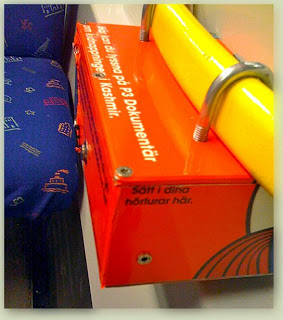 When you step inside the train, all the usual advertisements have been replaced with red information panels and, upon sitting down, attached to the handle below each window, you’ll find a small red box with audio jacks. Just unhook your headphones from your iPod and plug into a documentary.

Each set of seats has a different story so if the train is not too crowded you can pick a seat that has a story you’ll find interesting. The day I was lucky enough to have a chance meeting with the documentary train, I was unlucky enough that it was packed with commuters coming home from work. Suckers!

One of the few open seats was next to a box with a documentary about kidnappings in Kashmir. The little bit of Swedish I am able to understand is easiest when it’s on the radio and people are speaking slowly and clearly, but you don’t have to understand much to grasp how depressing this story was. 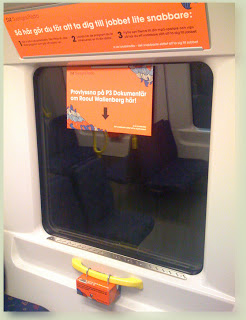 Another box in the train had a story about Raoul Wallenberg, a famous Swede from the World War II era. Wallenberg worked as a diplomat in Hungary and saved thousands of people from the Nazis by issuing them fake Swedish passports.

Renting dozens of buildings in Budapest, he helped house more than 35,000 people in an impromptu compound of buildings disguised with fake signs of offices and research institutes.

What an awesome dude. I mean, he saved tens of thousands of lives and here I am just typing on the internet about other people’s art. Oh well, maybe I’ll do something cool tomorrow.

Three cheers for Raoul Wallenberg on Sweden’s National Day! … oh, right, I forgot. June 6th is not only my parents’ anniversary (45 years!) it is also Nationaldagen in Sweden.

The Sixth of June in Sweden

Nearly half a dozen significant events in Swedish history have transpired on the sixth of June, including Swedish independence from the Kalmar Union, various transfers of power, and some royal weddings (though the one next year of Princess Victoria and Daniel Westling is oddly scheduled for June 10th).

Although the importance of June 6th in Sweden goes back nearly 500 years, it was not declared an official national holiday until 2005. It’s like the Swedish 4th of July and it’s practically brand new! The date was traditionally celebrated as Flag Day but recently the Swedes finally decided it’s not too nationalistic to celebrate your country. I celebrate their country every day, so I’m glad this weekend everyone else is joining me. There are outdoor festivities and music going on everywhere.

These National Day celebrations are being augmented with the endless racket of thousands of high school graduates in their traditional, white, sailor-style graduation hats, riding around on the backs of giant trucks, pumping loud music, screaming, drinking beer, and otherwise generally shattering everything I’ve said about Sweden being a reasonable, quiet place.

Such a truck is called a studentflak (student flatbed truck). They have huge sound systems and are covered in homemade banners, flowers, and sometimes trees. Yes, there are trees on the trucks with the kids who are partying. Maybe you should just see for yourself.

I didn’t take that picture and I didn’t make this video of trucks riding through Stureplan, I found them on the website of a company that rents the vehicles, but I think they capture the idea. (Click the HQ button to see it in higher quality) There are companies who specialize in renting out these trucks, just as they would any other party supplies.

Here is a link to a television commercial for a studentflak rental service, and here is a flak with trees on it leaving a school with the parents proudly watching.

It’s a big deal. A big loud, annoying, whooohooo-hip-hop-party deal. I mean, it would probably be fun if I was 18, but I ain’t, buddy. I was once, but that was a loooonnnngg time ago.