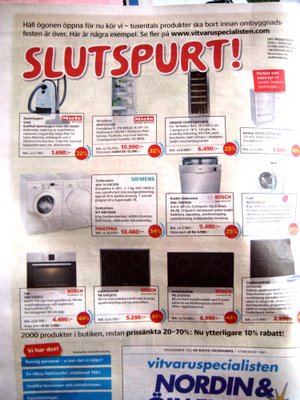 A word of warning to our more impressionable readers: Today’s story may include some risqué language, namely English.

No coverage of Swedish culture would be complete without an article about the abundance of common words in the Swedish language that look like dirty English words.

Perhaps nothing could illustrate it better than this advertisement in a recent newspaper with the headline “Slutspurt!“

English-speaking people who see this headline might expect it to be the title of an incredibly shocking pornographic film – one featuring lots of sluts and lots of… well, I’ll let you use your imagination.

Below the headline, there’s a vacuum cleaner, a wine rack and a washing machine. Oh shit! This movie’s gonna be sick!

Don’t warm up your BitTorrent just yet. This is actually an ad for a clearance sale of home appliances. Slutspurt is Swedish for “final sprint” and basically means that the sale is almost over.

Slut (pronounced “sloot”) means finished, closed, ending, and about a dozen other similar things. Slut is just one of many Swedish words that look suspicious. In fact, the word for “look” is another one: titta. Yes, the English word for something you’re not supposed to look at is almost exactly the word for “look” in Swedish.

The Swedish word for “vacuum cleaner” is dammsuga, but as I’ve just learned, if you leave out one of the M’s it becomes damsuga which means “lady sucker” instead of “dust sucker.” Maybe it can stay in the dirty movie.

Fartkontroll is not a new medicine for people who eat a lot of beans, it’s a radar speed trap. Fart means “speed” or a way to drive. For example, a garage entrance may have the sign infart. Sounds painful, right? 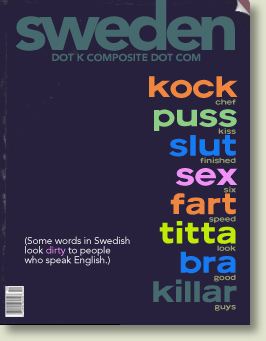 Suppose you see a picture of a group of men in the newspaper with the caption, “Sex killar.“ Settle down, they’re not in any danger of being arrested. Sex means six. Killar means guys. These “six guys” may be quite the opposite of what you first suspected.

And, of course, bra means good. All you hippies hear that? Bra equals “good!”

In the not-so-dirty but equally confusing category, eleven means “the student” and stapla is to “stack” not “staple” and krimpa is to “staple” not “crimp.”

Gift means “married.” A bit suggestive about what you’re supposed to bring to the party?

If someone shouts “Lycka till!” at you, they’re not telling you to put your tongue on a garden implement, they’re wishing you “good luck.”

One of the words that confused me the most when I first visited is klar which sometimes means “clear” or “ready” but on a computer or ATM it means “finish” or “confirm.”

Kram is not a way to shove something together, well, not exactly. It means “hug.”

Surprisingly, it’s perfectly acceptable to have someone’s puss on your face in public. Puss means “kiss.”

However, kissa is not something you want someone to do on your face. Kissa means to “pee.”

I could go on, I mean, the collection of these words is virtually limitless, but I know you are probably at work right now and I don’t want your boss to walk in and see you reading a web page that has puss, sex and slut all over it. You can thank me later.