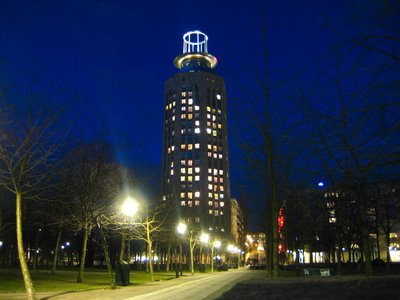 Since my first visit to Stockholm in the 1990s, this tall, octagonal building on Södermalm has always caught my attention. Perhaps because it seems so imposing and monolithic, I had always assumed it was from the 1940s or ’50s. In fact, it was essentially brand new the first time I saw it. 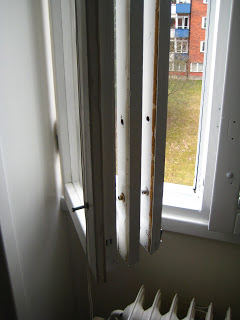 Söder Torn (“South Tower”) was completed in 1997. It has twenty-four floors of apartments, a swimming pool in the basement, retail and a coffee shop on the ground level, and an extended-height, glass-enclosed party room on top, with 360° views of the city.

There never seems to be any shortage of windows in Swedish buildings. Swedes have a bit of a love affair with the sun. I guess all people do, really, but when you don’t get to see much sunlight for a few months a year, I suppose any opportunity must be exploited. The downside of wanting to have so many windows is that for half of each year it is insanely cold outside. Drafty windows can get costly. The compromise between having lots of windows and keeping warm is making the windows thick.

This is a typical triple-pane window that I was able to get a picture of in some degree of disassembly as the roommate is still in the process of cleaning and painting everything. 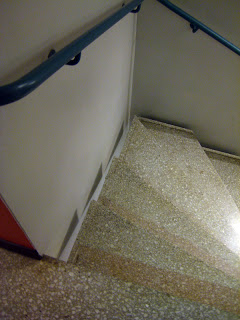 Sometimes important details are so obvious that they go unnoticed. One of the most unpleasant parts of living in an apartment building is being able to hear your neighbors through the walls, floors, and ceilings. Swedes are generally much quieter people than Americans. There isn’t constantly music playing everywhere, people yelling “whooohoooo” all the time, and it’s unusual to hear a loud vehicle outside.

You would think some types of noise are parts of the natural world and would be outside of much control, like the sound of people walking up and down the stairs in a building. Amazingly, there seems to be a solution for that as well. I’ve noticed in a lot of buildings – even older ones – that the stairs are fixed to a center column and not attached to the walls. This keeps the vibration and booming sounds of heavy feet isolated away from the apartment walls.

This is such a great idea that it blows my mind. It is so widespread here and yet I have never noticed it in any American buildings. As you can see in the images here, the stairs are narrower here, so my guess is that US fire codes and gigantic people are part of the reason that American stairs all seem to have a similar wide, rectangular, back-and-forth, bookshelf quality. 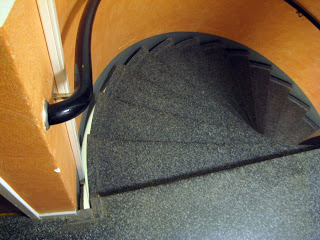 I wouldn’t have any clue as to how to begin researching something as obscure as the origin or reasons for the popularity of certain architectural features in different cultures. (Maybe here?)

I do know that these types of stairs are not new. I’ve seen them in many older buildings, even in half-century-old apartment houses from the Marshall Plan era, which are relatively prevalent. The building I’m living in in Hagsätra seems to be at least forty or fifty years old and has the round stairs you see here with orange walls.

I guess there could be a few inconveniences about stairs like these. For instance, if you drop your keys near the rail, you may need to walk down eight floors to find them. Also, if two of the aforementioned gigantic people were walking in opposite directions on the stairs, one would probably need to wait on the landing for the other to pass. Moving furniture on tiny stairs is also a real treat. At least it’s only a pain in the ass for you and not disruptive for your neighbors.