Even in America, every Ikea store is incredibly huge. The closest one to where I live has the distinction of being the largest in the world. I visited a couple weeks ago and spent a few hours getting lost in the maze. I bought some candles, hangers, and what I believe may be the best pillow ever. Oh yes, and I ate dinner in the cafe where they have one of the best deals in Stockholm: pizza slice and a drink for 12 kronors (about $1.50). I don’t know if they have it in American Ikea stores, but here they sell Ikea brand cola and other flavored sodas including lingonberry, a Swedish staple. I was excited and wanted to try both the cola and lingonberry soda, so of course, I ended up drinking too much of it. 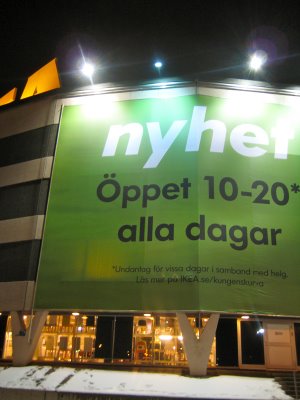 This is a 3-story sign on the building that says “New! Open 10-8 every day” … Um, excuse me, how late are you open? What about tomorrow? And Sunday? Is that new? 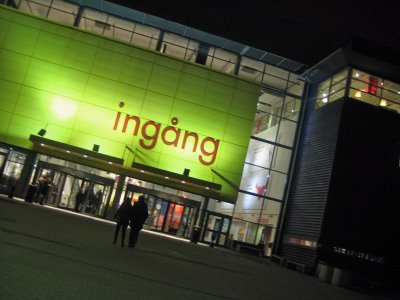 This Ikea is near the Skärholmen area in a neighborhood called Kungens Kurva (the King’s Curve). The area got its name after a car chauffeuring the King of Sweden ran off the road there in 1946. That king, Gustaf V, was the grandfather of the current king, Carl XVI Gustaf. The King was not injured in the accident, but still today there are endless rumors about how the car actually happened to run off the road. Apparently, “something” may have been going on in the car between the King and his chauffeur. These rumors went along with other allegations and scandals at the time relating to the King’s sexuality. He was kind of a twink and had a fancy mustache, so I don’t know, maybe he was asking for it. 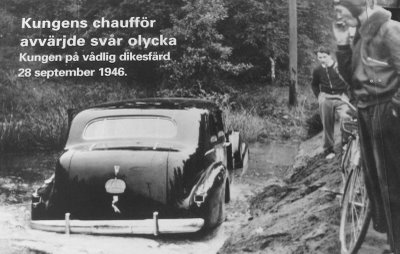 Just after I arrived in Sweden, it was announced that the 31-year-old Crown Princess Victoria had become engaged to her longtime boyfriend, a 35-year-old personal trainer and businessman named Daniel Westling. It is no overstatement to say this was HUGE news in Sweden. Every TV channel, the cover of every newspaper, every magazine, et cetera. Pictures of the ring, the press conference, the couple sitting awkwardly on a fancy sofa making the announcement, and later, more awkwardly at a table with the King and Queen. It was everywhere, I tell ya.

Of course, Sweden has a prime minister and a democratically-elected parliament, so the Royal Court’s duties are now ceremonial. But like the British, the Danes, and others, people are still fascinated with royal families, and this engagement is big news not just for the obvious reasons. 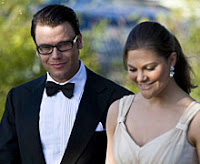 In 1980, Sweden became the first country to change its rules of succession to equal primogeniture, meaning that the oldest child would become the head of the monarchy regardless of their gender. Victoria, born in 1977, then became heiress apparent which was historic. It means if the King passes away or abdicates the throne, she will be the first regnant queen of Sweden in nearly 300 years.

A queen regnant is a female who is the head of the monarchy. The current queen, Silvia, is a queen consort, that is, she is the wife the reigning monarch but she could never become the sovereign leader. The last queen regnant in Sweden was Queen Ulrika Eleonora whose short-lived rule ended in 1720 and there were only two other female heads before her. Those reigns ended in 1412 and 1654. Surprisingly, none of those broads were even in the same family as the current lineage of royals.

Get this: An entirely new family was shipped in from France in 1810 to take over the throne. During 1809 and 1810, there was a quick succession of four kings in Sweden. The reigning king was overthrown in a coup and temporarily replaced by his uncle who had no children, who was replaced by a prince from Denmark, who died the same year.

So the Swedish Ståndsriksdagen (the people in charge of filling the vacant seat) actually elected a French general named Jean-Baptiste Bernadotte to be the new king. This guy was Napoleon’s sister-in-law’s sister’s husband. Napoleon liked this guy because he kicked some ass in the French Revolution and the Swedes wanted to pick someone the little guy would look favorably on. So there you have it, the Swedish Royal Family is from France. 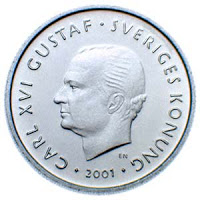 The current queen, who married into the family, isn’t natively Swedish either. Queen Silvia has a Brazilian mother and a German father. She met the King at the 1972 Munich Olympics. It’s important to a lot of people here that Princess Victoria’s husband-to-be, even though he is a commoner, is from a proper Swedish family. It gets more Swedish blood back into the lineage, especially if they have children.

Oh, one more thing about the Swedish Royal Family: the King’s picture is on all the coins here. Weird, right? A guy who is alive has his picture on the money. The paper currency is not like that. It has pictures of artists, writers, and musicians, but I’ll write about that soon. Swedish paper money is interesting and beautiful enough to get its own story here. I’ll save it for a rainy day.