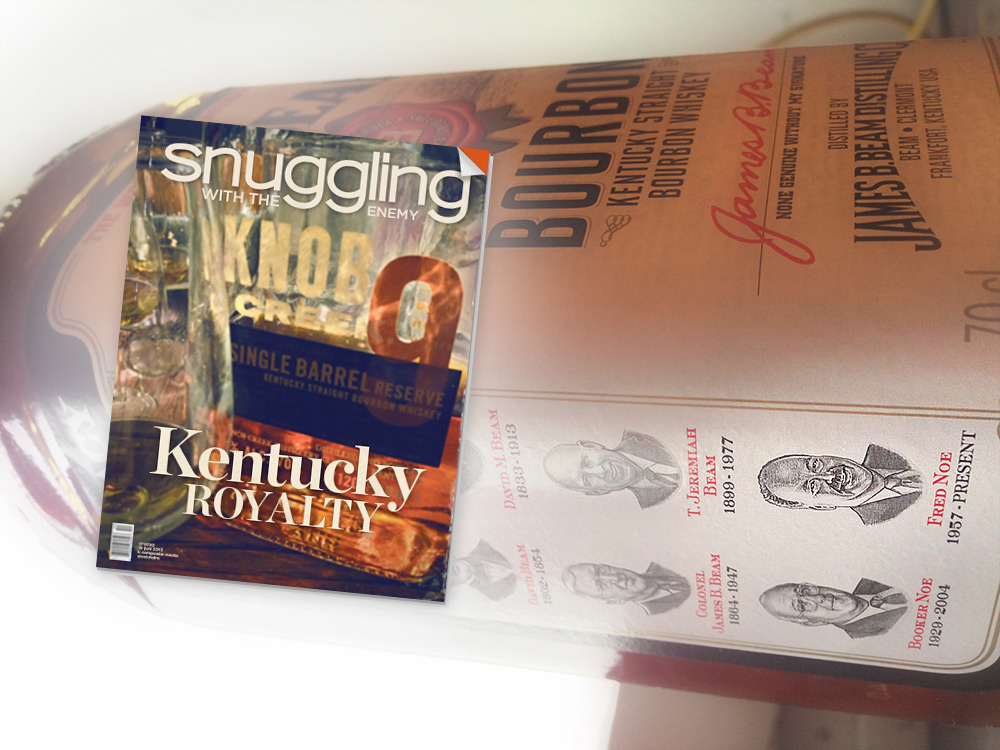 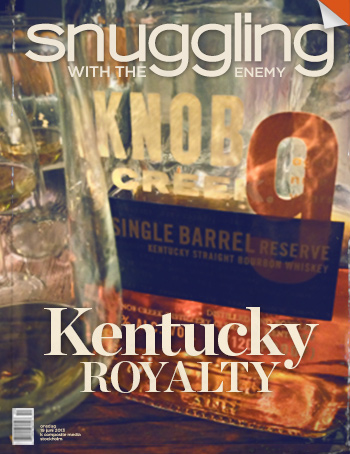 I recently had the opportunity to meet a true Kentucky legend right here in Stockholm.

Though he’s not a celebrity in these parts, everyone where I’m from knows the name Fred Noe. Better still, most people know the name of his great-grandfather, Jim Beam.

As the seventh-generation distiller of the family-run Jim Beam distillery in Clermont, Kentucky, Fred Noe is both a living piece of Kentucky history and the foremost face of his family’s company, founded in 1795.

Summoned to the Castle

The evening was a special opportunity for members of the Stockholm press to mingle with Mr. Noe. The small gathering of about 15 people included journalists from food and drink magazines, restaurant trade papers, as well as a couple people like myself who are enthusiasts of both writing and drinking.

The mingle was held in Stockholm’s Vasastan neighborhood, right around the corner from where I work at Bonnier Magazines. It was hosted by Beam Brands and their Scandinavian distribution partner Edrington.

I walked a few blocks to Edrington’s offices, then took the elevator up to their beautiful top-floor space, where each attendee was individually greeted at the door and introduced to Fred Noe. This was a real thrill for a Kentucky boy in Sweden.

Everyone chatted for a while, in English of course. Mr. Noe said his Swedish wasn’t very good. I have a feeling he hasn’t learned much more than “skål” (cheers).

I asked him if he was a fan of Louisville’s basketball team or Kentucky’s. He’s a Kentucky fan. I excitedly said, “right on!” Then I quickly confessed that I would have said “right on” no matter which answer he gave. I don’t really care too much either way. (This meeting, by the way, was before Louisville won the national championship a couple weeks later.) 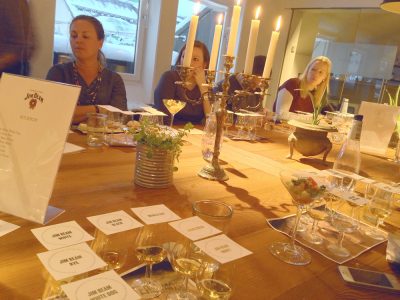 The room we gathered in is a lounge, outfitted with a large, natural wood dining table, a view over Vasastan’s rooftops, and a minimalistic bar stocked with an unrestrained collection of Beam Brands’ products.

After a short greeting, we all gathered around the table for a light meal of Kentucky-style food. Miniature barbecued hamburgers were on hand as well as a delicious corn-mash soup. This small meal warmed us up for the main event.

It began with the most uncomplicated type and proceeded toward the more complex. So at the beginning we had a taste of Jim Beam’s white dog – white dog is the bare, raw, un-aged liquor that comes straight off the still – and ended with the taste that has been most tampered with, Jim Beam Honey. 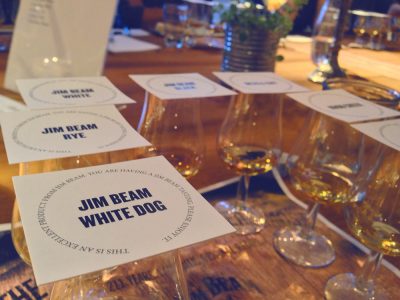 White dog is a strong, clear alcohol that has never been in a barrel. Most distilleries don’t sell their white dog, nor do they allow the public to taste it. But with the growing interest in bourbon over the past few years, it has become more common for distilleries to take some off the still and share it, mostly as a novelty or for guests in their visitors’ centers.

Another Kentucky distiller, Buffalo Trace, comes to mind as one which has bottled their white dog and brought it to market.

Most people would find this beverage undrinkable. White dog is undilluted and doesn’t have the warm, woody flavor that bourbon has after spending years inside charred oak barrels.

Buffalo Trace’s white dog is just what you would expect: it’s an incredibly potent 125-proof (62.5% alcohol) monster that is both sweet and hairraising.

You’d think that a guy as steeped in bourbon culture, who was born into it and has spent a lifetime enjoying it, would be at least a bit immune to its pleasures.

This is not so with Fred Noe. He seems to enjoy bourbon as much today as anyone who isn’t a part of a seven-generation bourbon dynasty.

In addition to walking us through the varieties of bourbon that were presented for us, he spent a little time discussing the evolution of the family. Mr. Noe himself started working in the lowest ranks at the distillery decades ago, working his way through virtually every job on site in order to learn every detail of the process.

Fred’s son, having just graduated from college, is now working on the loading dock, helping to bring deliveries of ingredients into the warehouse.

Getting used to it

There were a couple things I liked about Fred Noe that left an impression on me during the evening.

First, as the standard-bearer of one of America’s most legendary alcohol-producing families, I had expected him to be the type of guy who would have a high tolerance for alcohol.

To the contrary, Fred had been out with some bartenders and PR people the night before and started our event by saying that he had a really bad hangover.

In the same way Swedes don’t get used to the winter cold, bourbon distillers like Fred apparently haven’t gotten used to the intoxicating effects of their own products.

The second thing I liked was that Fred is not a bourbon snob, as one might expect. He didn’t advocate drinking it straight or neat or undilluted. In fact, he spoke to the versatility of bourbon as a straight drink and as a component of other drinks.

“That’s the thing about bourbon,” he said, “mix it up any way you want to. It’s your bourbon, drink it how you like.”

I liked this a lot. Some people are purists and advocate for always enjoying bourbon straight or on the rocks.

Personally, I’m as big a fan of straight bourbon as I am of mint juleps, bourbon sours and pretty much any other way it can be mixed. Most often, for me, it’s a bourbon and Coke.

It was good to hear from a bourbon professional that he didn’t look down on any of the varieties of ways that anyone drinks the drink.

One of the high points of the bourbon tasting was the opportunity to try several varieties which aren’t available in Sweden. A 90-proof, rich, woody one called Devil’s Cut was one of these.

Devil’s Cut is a unique bourbon made from a “proprietary process that actually pulls the rich whiskey trapped inside the barrels’ wood after they’re emptied,” they say. “We hold this barrel-treated extract until it develops the proper balance of bourbon notes, and bottle at 90 proof.” 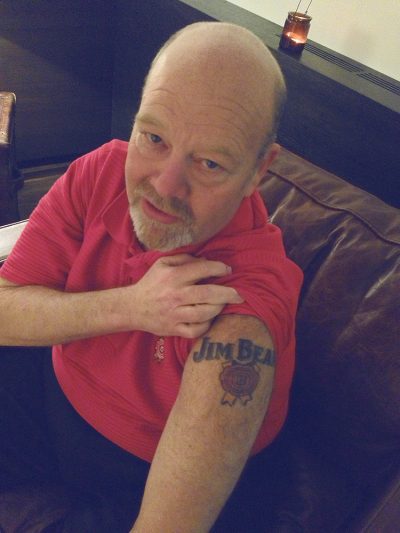 After the bourbon tasting, I had the opportunity to chat a little more with Mr. Noe, which was a riot.

He loves talking about his friend Kid Rock who is sponsored by Beam. Apparently, Mr. Rock was responsible for giving Devil’s Cut its name.

Fred made my night by personally giving me a neat glass of Knob Creek’s Single-Barrel Reserve which is still unavailable in Sweden.

This bourbon has been out for a couple years in the US and has been one I’ve really been looking forward to trying.

It was spectacular. And potent.

Laid out on Knob Creek

While I was enjoying it, Helena reminded me that my band Metroschifter released a song a few years ago called “Knob Creek” that mentions bourbon. Fred asked me to made a note of this so he could check it out on iTunes when he got back to the hotel. Yep, Fred Noe has an iPad.

If there are bourbon celebrities, Fred Noe is definitely one of the big stars. So it was a big thrill to meet him – here in Stockholm no less – and to have the opportunity to get a firsthand presentation of some of Kentucky’s famous flavors. 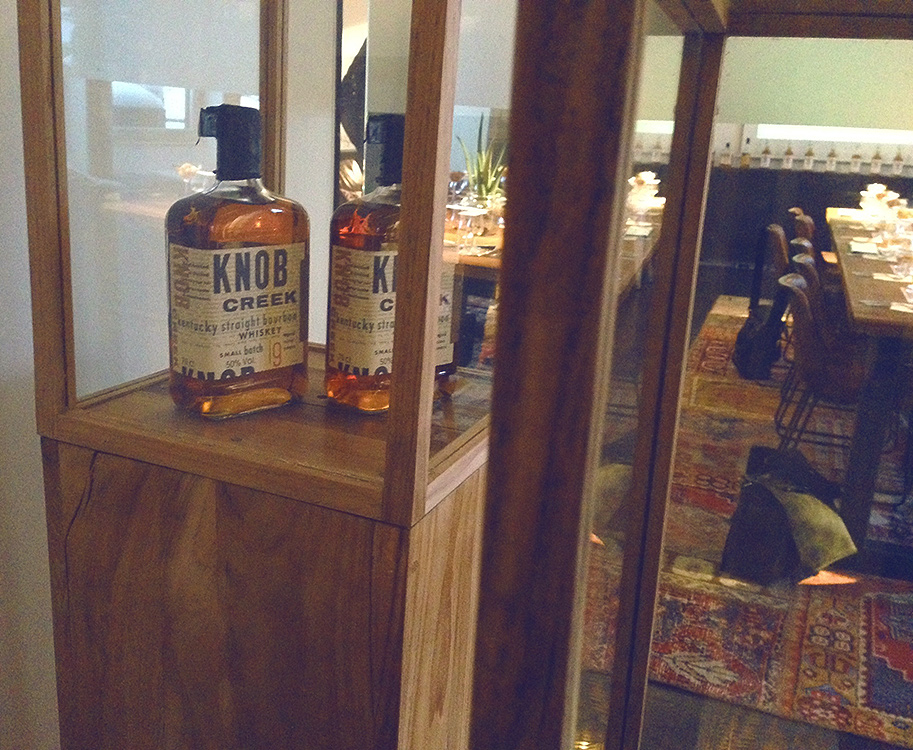 Crash Course in Cocktails with Drambuie