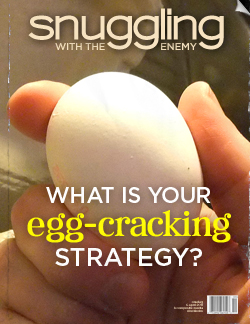 I realized when I typed out this artcle’s headline that a casual reader might think the term “egg-cracking” is a new way to curse.

“Sorry I’m late. I didn’t think that egg-cracking train would ever come!”

“Will you shut your egg-cracking mouth?! I’m trying to think!”

Naturally, I hope this will start something big. I encourage you all to start using “egg-cracking” in your everyday language.

To those readers who are too egg-cracking stubborn to change their ways, I can only say I wish you’d all get off your egg-cracking high horses and live a little.

The original purpose of this article was to solicit advice from the masses in order to determine the best method of cracking an egg on the edge of a skillet (that’s what we call a stovetop pan, suitable for frying eggs).

I think I’ve gotten only marginally better at cracking eggs, despite having been frying and scrambling them for decades now. I have done some other stuff, too, I mean I haven’t just been cooking eggs the whole time.

But each time I return to the stove for the purpose of making scrambled eggs, I inevitably end up fishing tiny bits of egg shells out of the mix. That is followed by hosing down the stove in order to free the area of projectile egg whites that have landed outside the skillet zone during the egg-cracking procedure.

So I’d like to open up the comments section below for you to share your egg-cracking strategy with me. (Note: I’m not cursing your strategy. I’m asking for advice with the cracking of eggs.)

A lot of people have trouble cooking eggs. After the recent death of Hollywood ocean liner Elizabeth Taylor, many stories were told of her magnificent life. My favorite came from Daniel Mann who directed her in BUtterfield 8. (Yes, the U is supposed to be capitalized. It’s an old-timey telephone number.)

Taylor’s performance in the film won her the Oscar for Best Actress that year, beating out Shirley MacLaine in The Apartment, among others. (I know, right? How often does a comedy role earn a Best Actress nomination?)

Just how good was Elizabeth Taylor’s acting? The Times of London recounted an story from the set:

“Shooting a scene for BUtterfield 8, the director Daniel Mann handed his star a couple of eggs and told her to pretend to make breakfast at the stove. Taylor’s eyes grew wide. Holding an egg out in each hand, she implored: ‘But what do I do with them?’

“She had never made breakfast in her life. Nor had she been to a football game or a school dance that wasn’t arranged by the studio publicity department. Press releases might try to create the illusion that Taylor was just a simple girl with ordinary dreams, but she was always different from the rest of us, and the public knew it.”

What a splendid life. Truly amazing that all the delicious cuisine she shoveled into her monstrous, salivating food hole, had to be prepared by other people. “Be a dear and fetch me another ice cream and steak sandwich, dahling! And some diamonds, of course.”

Another little-known trivia fact about Elizabeth Taylor: despite her glamorous lifestyle, a lot of people didn’t realize that she wasn’t really that pretty. A lot of people think she was a ravishing beauty, but in fact, it turns out that Grace Kelly, Sophia Loren and Ann-Margret were all way prettier. Again, these are probably facts.

Well, almost everyone is prettier than she is now, since they already done rolled her humongous corpse in to a piano case and dumped it in cold, heartless earth beneath the devil’s sinful playground called Hollywood.

CNN and several other reputable news outlets reported* that a “special hearse” was employed for the occasion. The vehicle was bright orange in color and made a beeping sound when it backed up.

But seriously, back to the topic at hand:

How do you crack an egg to avoid getting guts all over the stove and/or eggshell shrapnel in the skillet?

Footnote: *=”did not report”

The 18 and Over Airline