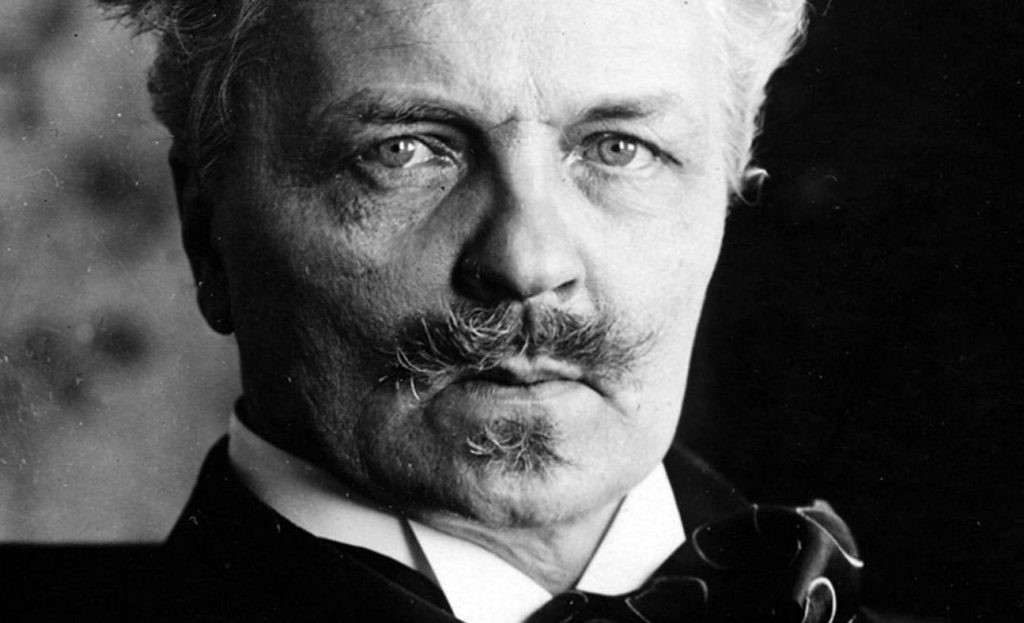 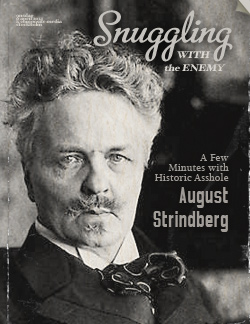 August Strindberg was one of Sweden’s most famous anti-Semites and male chavinist pigs. Born in 1849, he labored for years as a writer and eventually enjoyed great success, until he finally left everyone alone (“kicked the bucket”) in 1912.

Strindberg’s work as a playwright was indisputably innovative and groundbreaking. Certainly ahead of his time, he is known for developing methods of storytelling that proved impossible to portray on stage – multiple instances of the same character, inner thoughts and monologues, non-linear storylines. Decades later and after his death, with the advent of film, these techniques could ultimately be accomplished.

It could be said that August Strindberg was one of the world’s first screenwriters, long before screens were being used for more than shadow puppets. I mean, lots of things could be said about him. I have even said some before, when discussing the Karlaplan neighborhood where he lived in Stockholm. (And just to be clear, I mean no disrespect to the fans and purveyors of shadow puppetry.)

Apparently, Strindberg’s creative invention and experimentation earned him a pass in the historical record for being a total douchebag in real life.

He is still respected today as a great writer despite his unforgivable personal views on the inferiority of people who weren’t Gentiles or males.

In the event that any passers-by of his day were unaware that he was a total asshole, Strindberg grew a ridiculously stupid moustache to advertise his enormous ego. Even a common person uneducated in the arts could tell what a dick he was just by looking at him.

He also refused to smile and, anytime there was a camera present, he stared into it with a humorless death gaze of total derision.

Of all the great artists, writers, filmmakers and musicians who have made Sweden proud – you know, like Roxette, Yngwie Malmsteen, Lisbeth Salander, Elin Woods, Maria Montazami and Kalle Anka – unfortunately that wonderful work is tarnished by this certified dill-hole, August Strindberg.

He married three times, each time to an increasingly younger woman. By the time he was your age, he was married to someone much younger. These are probably facts.

While some fans or critics may cite his writings dealing with inequality of the sexes as an argument for the idea that he understood women, I have a feeling the three women who were lucky enough to divorce him (two of them after only two years of marriage) may disagree with that characterization.

Of course, I don’t know for sure, on account of never having met any of the people I’m writing about. This is all speculation, you see, since all these turkeys have been dead for a long time.

But to the point, just because you write eloquently in the voice of someone with sensitivity, that doesn’t mean it’s okay for you to be insensitive when you’re not writing. That’s putting it courteously.

Jeffrey Dahmer was apparently very creative in the kitchen, but…

Okay, so Strindberg was a great artist, but just like Eric Gill, what he was doin’ backstage kind of makes you want to avoid visiting his art.

Strindberg is buried at Norra Begravningsplatsen in Stockholm. His grave is marked with a magnificent, gigantic, black granite cross, carved with gold-leaf lettering. You see, God is very impressed with this sort of thing.

Some of the other graves around it, like Ingrid Bergman’s for example, are very small and modest. The Lord certainly hasn’t noticed that these lesser characters have even died, much less lived in the first place.

But it’s not like a fancy, expensive Christian grave could have saved Ingrid Bergman from Strindberg’s beyond-the-grave rants anyway. I mean, she was part Jewish, and we all know how keen the Ghost of Strindberg is on those types.

Lady Bergman’s hopes of a peaceful resting place have been further complicated by the fact that she earned three Academy Awards. That just don’t sit well with the Lord’s distaste for Hollywood. So when the Ghost of Strindberg starts going off on tangents around midnight every night, it kinda sucks ’cause God has his back. Ain’t no better hype man than the Lord, y’all.

If you’re in the area of Norra Begravningsplatsen and you need to pee really bad, please stop by to pay your respects Mr. Strindberg.

Swine flu? Never heard of it!