I don’t know how to say this delicately, so I’ll just come right out and say it: Swedish girls think that tights are pants. 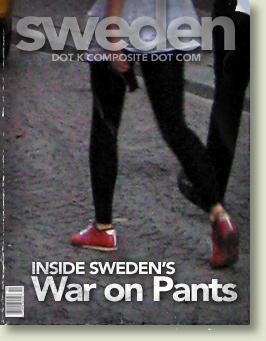 If this were happening in America, where much of the citizenry is Super-Sized, it would be torturous to the eyes. However, in Sweden, where 99% of the population is in fairly good shape, well, it looks really nice.

It’s a style you might expect to see Ann-Margret sporting in Viva Las Vegas or some other famous person in some other imaginary context, but not on ordinary people in their regular lives on their way to school or work. Seeing it hundreds of times every day on the street takes some getting used to. For an old, lonely guy like myself, seeing all these broads parading around without pants on is a mix of amazing, aesthetically appealing and a whole different kind of torturous.

The rampant epidemic of girls not wearing proper pants is quite widespread, and while it would be easy to classify this fashion as a type of standard-issue Swedish Woman Uniform, they’re all doing it with a variety of different levels of grace and audacity. 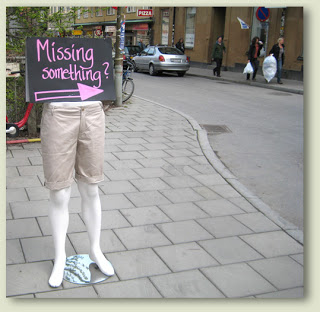 Some will wear a long shirt or sweater to cover their bottoms, whereas others will just literally act like their opaque tights are indeed pants. Some keep it cute and tasteful while others force the style into the realm of ridiculous. There are all types from knit to shiny, nylon to cotton, thick to thin, ankle-length to full-length. Occasionally you’ll see some colors or patterns, but inevitably they are almost always solid black, presumably because black goes with everything (especially more black).

For those who actually do wear some type of additional covering with the tights, it often takes the form of a micro-skirt. It is not uncommon to see a girl walking on the sidewalk, constantly pulling down her “skirt” to ensure it is covering her butt completely. Please note that the word “skirt” is being used in the most generous way possible. If I saw some of these “skirts” on store racks, I might mistake them for belts or scarves.

Pushing the acceptable boundaries of the style is so pervasive that earlier in the summer I spotted this half-mannequin wearing shorts with a message reading, “Missing something?” As if to say, “We have pants for sale over here if you’re not wearing any.” 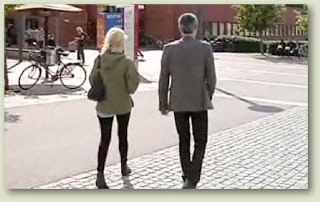 I’ve wanted to write about this phenomenon since sometime around the first day I was on the ground in Sweden. The problem has been that I’d like to include some pictures with the story and it just doesn’t seem appropriate to go around town taking pictures of girls’ legs. Let’s try to avoid lurking and/or looking like a tourist.

The pictures you see here were taken from a news program on one of the state-run SVT channels and the woman not wearing pants – or should I say, the woman wearing “Swedish pants” – is the reporter. Not only is her outfit quintessentially Swedish – blonde hair, black legs, smart glasses and a Fjäll Räven jacket – so is her name: Emma Eriksson. Seeing it all in one place was like hitting the jackpot in terms of my need for pictures to go with this story.

A story in yesterday’s Aftonbladet newspaper featured a security camera image of some girls dressed similarly, beating the crap out of somebody. (What? Violent crime came to Sweden before pants did?) 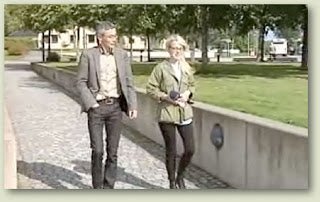 It seems these young, 20-something revolutionaries were beating up a spokesperson for the Swedish Democratic Party and his girlfriend. I won’t get into the politics, but let’s just say they wanted to show how intolerant they are of people who are intolerant of others. In Sweden you don’t get beat up for being a foreigner, you get beat up for not liking foreigners. (Of course I’m oversimplifying all of this, but that’s basically what it comes down to.) Back to the pants…

Americans are typically bigger people than Swedes – we’re talking circumference – and even those who aren’t usually still wear bigger clothes. Something that strikes a lot of Americans who visit Sweden is that it seems everyone here makes much more of an effort to present themselves nicely. I have observed it many times and several other Americans I’ve met here have confirmed that I’m not just imagining it. 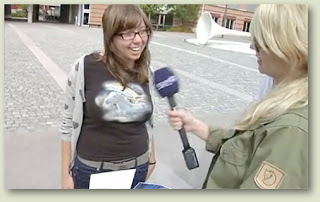 I’m sure many factors contribute to the better-dressed nature of the Swedish populace. Everything from the higher standard of living to the pervasive culture of design and aesthetics could play a part in it.

The smarter, healthier society as a whole, resulting from generations of people growing up with universal healthcare and public higher education give people the awareness they need to know what looks nice, the necessary money to buy new clothes, the body types that can accept clothes in sizes not starting with the letter X, and the cleaner surroundings in which to do all of the above.

If your surroundings are appealing, chances are that you’ll assimilate to look proper in that context, deliberately or not. If you live in a sewer, you’ll probably dress appropriately so as not to get sewage on anything nice. I’m not calling America a sewer (What?! You’re callin’ America a sewer? Get him, boys!) I’m just saying that we are all products of our environments and people dress according to where they’re going, what they expect and how they feel.

The extensive 1980’s crime-reduction program in the New York City Subway system famously focused on sanitation and the swift removal of graffiti as priorities placed high above an increased police presence.

People who aren’t working so hard and still struggling to stay afloat can take the time to fix up and look sharp on their way out the door. If you’re tired all the time and your life sucks, well shit, ya might as well wear sweatpants and a Looney Tunes jacket to the Winn-Dixie. Fuck it. Ain’t nobody to impress there anyhow. O’Reilly comes on in an hour anyway and I gotta pick up them little fuckers from football practice. Why me why me why why oh God oh God please let me die take me away just leave me be all I do is work and this is the thanks I get God dammit God dammit God dammit.

Anyway, where was I? Oh yeah, Swedish girls think that tights are pants. (Good story today, Ritcher.) Yep. Still got it!