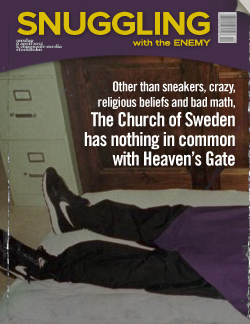 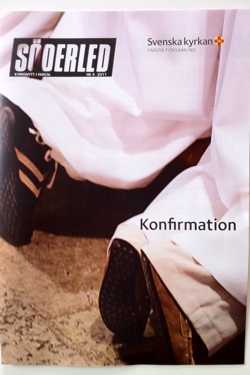 Despite the “no advertising please” sign that is posted on nearly every door and mailbox in Sweden — including mine — it seems like it’s still okay for the Church of Sweden (Svenska kyrkan) and a number of schools to put their pamphlets through my door.

The picture on the front of this magazine from the church (which shows the shoes of some people kneeling while wearing churchy clothes) immediately reminded me of the Heaven’s Gate cult.

Heaven’s Gate was a California mass suicide in which all the “victims” got saved from the cleansing of the Earth by being beamed up to space.

You see, a lot of people don’t realize this, but the planet Earth was wiped clean in March 1997. The Heaven’s Gate people, thirty-nine of them, laced up their matching Nike Dunk Pro SB sneakers, got in bed, and escaped just in time. You call it mass suicide, I call it a quick getaway to sweet freedom in the sky. We’re quibbling over semantics here.

Either way, Nike couldn’t thank their lucky stars enough for all the free promotion that came out of the event by way of news photos. Just do it, already. 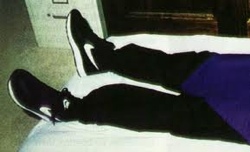 A spaceship, which was following the Hale-Bopp comet (pretty foolproof disguise, actually) collected their souls and whisked them away. Finally, dudes, let’s GTFO.

The method of escape was a delicious pudding, laced with phenobarbital and a vodka chaser. Kool Aid was already taken, so the Gate had to do their own thang.

Once on board the ship, it was quite important that each member took $5.75 along with them. I’m not sure if this was for snacks or what, but this is true, each corpse at the scene in San Diego was found with a five dollar bill and three quarters in their pocket.

Update: Those people are now living in a kickass paradise somewhere a few light years past Orion. Unfortunately, Nike has no distribution in that area, but I hear five bucks goes a long way.

The Church of Sweden is a Lutheran denomination that has nothing to do with Heaven’s Gate – to my knowledge – except that their magazine cover sure looks a lot like some crime scene photos.

It was the country of Sweden’s official church until 2000. Pretty late to lighten up on that one, but Sweden can’t win ’em all.

Money from general taxes still fund the church, though Swedes can opt out when filing their taxes if they don’t wish to support it.

Most people don’t opt out for the simple reason that paying taxes in Sweden is as simple as answering yes or no. When your tax forms come in the mail, all the numbers are already filled in. All you need to do is confirm that the total is correct, which you can do online, by phone, SMS or even the tax agency’s iPhone app. If you want to opt out of giving the church some money, this creates extra steps in the process and – good news for the church – most people just don’t bother.

I didn’t bother opting out either. It took me seven minutes to do my taxes in Sweden this year. My American taxes, however, usually take all afternoon and I still don’t know if I’m doing it right. 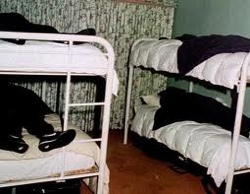 The church’s leadership is elected in general elections exactly as the Swedish Parliament. You just have to be a member of the church, a resident of Sweden and over 16 in order to vote.

Their website says that “up to seven million people” are members of the church. Up to? Okay, so it could be five people or it could be 6.99 million. We’re not sure, but it’s definitely no more than seven million.

(Coincidentally, I just bought a washing machine today and I paid up to seven million dollars for it. Well, up to 44 million kronor. Sounds like a lot, but delivery was included.)

Given that the population of the entire country is 9.4 million, it seems that figure of 7 million may have been, well, pulled out of the heavens.

A 2005 study commissioned by the European Union found only 23% of Swedes willing to report that they “believe there is a God.”

Another 23% indicated that they “do not believe there is any sort of spirit, God, or life force.” These are the godless atheist socialists you hear about when Republicans in Congress talk about how health care destroys society.

The majority, 53%, said they believe there is “some sort of spirit or life force,” which doesn’t exactly sound like someone who is a dedicated member of a church. I’m no historian, but I’m pretty sure Martin Luther didn’t subject himself to abuse from the Catholics and the Holy Roman Empire because he thought there was probably “some sort of spirit or life force” out there.

I’m also not sure how the Church of Sweden is counting their membership, but it doesn’t seem very accurate.

If everyone in Sweden who believes in any god is a member of the Church of Sweden, that puts the membership number only around 2.1 million people, according the EU’s statistics.

Sure, 2.1 million is, in fact, a number that is “up to seven million,” so I guess they’re right on that account.

Oh well. The good news is that the church is responsible for all the cemeteries in the country and — even if you don’t believe in anything — they’ll pay for your funeral.

That’s right. The Church of Sweden provides free funeral services for every Swedish resident. The family left behind pays only the undertaker’s fees.

All in all, it seems like a really nice little send-off for all these damn atheists on their way to Hell. But since the Church of Sweden also performs gay marriages, the clergy will probably be on the next boat right behind ’em. Bon voyage suckaaaaahhhhhhs!!!!!