Being an unmarried member of the Swedish Royal Family has been going out of style this year… and fast. 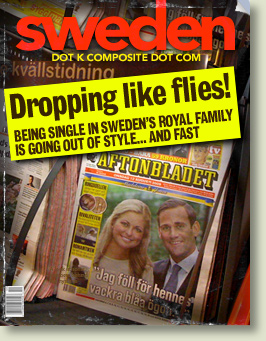 About six months ago, before I arrived in Sweden, both of the Swedish princesses were single, well, unbetrothed. Today, they’re both engaged to be married.

First, in the spring, 31-year-old Crown Princess Victoria got engaged to her longtime boyfriend, a businessman and gym owner named Daniel Westling.

At the time I thought, “If you can’t have the crown princess, at least the cute one who likes to party is still single.” She’s the one I liked anyway. Well, now, Madeleine is engaged, too. Curses!

Last week, the Aftonbladet newspaper announced (a day before anyone else) that Princess Madeleine, 27, had secretly become engaged to her boyfriend … pfft! … some handsome attorney (they have lawsuits in Sweden?) a casanova named Jonas Bergström … And in fact, this engagement has been a secret for more than two months. 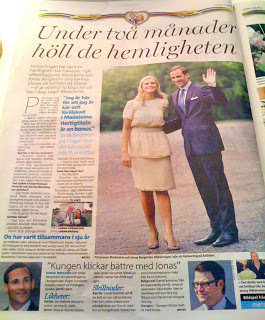 Great! Two wasted months of writing love letters and riding my bike past the Royal Palace at night to see if her bedroom light is on! (I’m kidding, of course. I don’t have a bicycle.)

Keeping such a high-profile secret in Sweden is almost as difficult as finding a can of refried beans. Furthermore, the fact that the engagement of the last remaining Swedish princess was kept undiscovered for two months from the obsessive Swedish tabloid Aftonbladet is as flabbergasting as the fact that both princesses became engaged within a period of four months.

What it all really means, though, as I’m sure my faithful readers already understand, is that barring some unforeseen events which could break off one or more of the engagements, it appears that all my hopes of marrying into the Swedish Royal Family have, for the moment, been dashed. Brutally crushed, really. It’s a sad day. I, too, may have to marry a commoner. Ugh… I shudder at the very thought of being touched by any of their filthy, cake-eating hands.

I know what the Swedes reading this are thinking: “Prince Carl Phillip is still single.” Wink, wink. Sure, maybe I could get a job as his chauffeur. It’s kind of a long, old story about his great grandfather, King Gustav V. 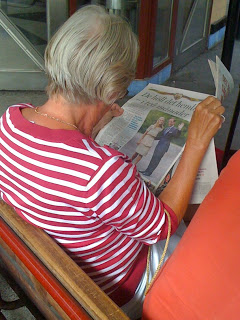 Yet, despite any lessons he could have gleaned from his great grandfather about the dangers of driving too fast around curves, Prince Carl Phillip, 30, has become an enthusiast of just that. He’s a race car driver.

“I see here on your resumé that you are the Prince of Sweden, the Duke of Värmland and you drive really fast in circles. Is there any other experience you’d like us to know about?”

He seems like a nice guy, but suffice it to say that I would have preferred one of the girls.

It’s just that both of these birds were single forever and within a few months of me being in the country they both got engaged. Suspicious, isn’t it?

I mean, it’s like as soon as I get here, they both suddenly decide to run off and married to basically any old guy they’ve been dating for seven years.

What is it about women that makes them so interested in men who are handsome, successful and have steady incomes? Don’t they know that all the real excitement is with guys who are courageous enough to have no idea where next month’s rent money is coming from? 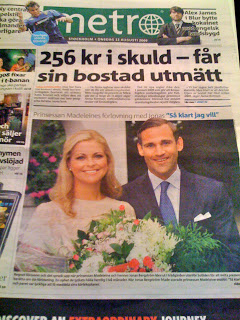 While the media coverage of Madeleine’s engagement… whoa, give me a second… I just threw up in my mouth a little bit. Sorry, let me start that over…

While the media coverage of Madeleine’s engagement has been fairly extensive, it really hasn’t matched the circus that surrounded Victoria’s. Perhaps that’s why they kept it a secret – to prevent such a frenzy.

The media is covering every aspect of the story down to the trivial details.

One story in the Metro newspaper analyzed reports that the King “clicks better with Jonas” than Daniel, saying that Jonas had a more proper upbringing and already knew how to behave at fancy events.

Aftonbladet reported that there was a secret meeting between the sisters in order to make sure it was okay that Madeleine and Jonas weren’t stealing Victoria and Daniel’s thunder by getting engaged just a couple months later. It’s totally true. I believe everything I read in Aftonbladet, The National Enquirer and The Bible. 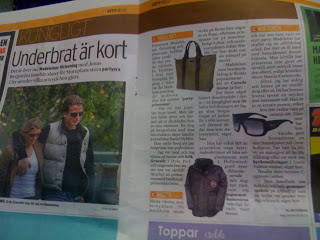 A separate article in the Stockholm City paper was essentially an obituary of Madeleine’s party-going lifestyle. The headline announces their investigation of “the impression she made.” The spread went into retrospective detail about her all-night ragers and showcased some of the fashions and styles she made famous.

City credits “Madde” with helping to popularize wearing oversized sunglasses at any time of day among the girls in Östermalm – “like in Hollywood,” it says – and Canada Goose winter jackets. Those jackets are crazy-popular here, rivaled only by the locally produced Fjäll Räven coats which are ubiquitous in Sweden.

“She got the name ‘party princess,” it says, but “It is over now. Madeleine’s engagement with Jonas Bergström means the end of Stureplan‘s big party era.” Wow, sounds like marriage really does equal death.

That story was accompanied by a photo of her ex Erik Granath groping her in public. I’m sure the King clicked royally with that.

The Would-Be King is Dead. God Save the Man Who Would Have Been King.