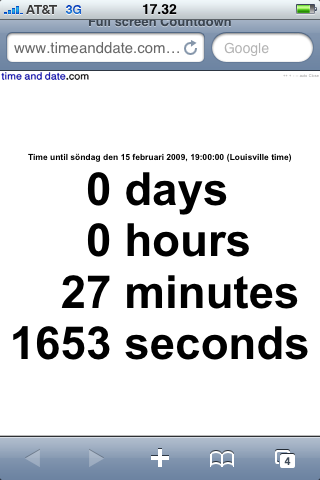 In the months leading up to my departure for Sweden, I had a countdown clock running on my iPhone. It was counting down the days, hours, minutes, and seconds until I left. I took this screenshot of it as I was sitting in the plane on the runway in Chicago. This was right when they were asking everyone to turn all their shit off.

At the time, I was really sad. I had just said good-bye to my sister and I was thinking about how much I was going to be missing my friends. As I’m posting this photo about six weeks later, all I notice about it is the AT&T service in the top corner and how much I miss unlimited data plan on the iPhone. Of course, I miss everyone a lot, but I can’t think about it too much.

This image also reminds me of how I searched the O’Hare Airport for a burrito while I was waiting for my flight. I knew from previous visits to Sweden (and Europe in general) that Mexican food is either nonexistent or a pale imitation, so I wanted to have one last feast. My search for a burrito was fruitless. I ended up having a deep-dish pizza and a local Chicagoan dark microbrew. Worked out great.