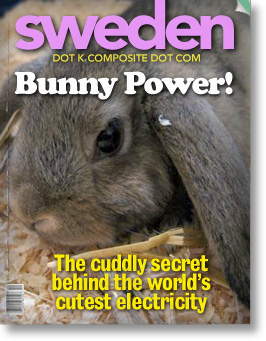 Sweden may have just taken a major step toward ousting Japan as the cutest country in the world. Stockholm is leading the charge. 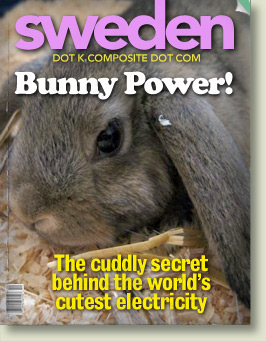 While some of the world’s big cities are infested with disgusting rats, wild rabid dogs and other pests, one of the main animal control problems in Stockholm is bunny rabbits. (I know, right?)

Surprisingly, the rabbits running rampant in the Stockholm area are not native to Sweden. These furry little guys are the result of generations of offspring from abandoned pets. It’s a man-made plague. A soft, fuzzy, lovable, lettuce-eating, man-made plague.

It seems that someone, somewhere set their pet bunnies free into the wild or perhaps – as I like to imagine it – there was some type of high-stakes jailbreak. A group of renegade rabbits escaped to freedom, shedding the shackles of their socialist captors. Bidding farewell to their lives of oppression in sparsely decorated Scandinavian apartments, these conies sprung to sweet, sweet liberty in search of all the ankle-high greens they could sink their two front teeth into. It was a genuine hare-brained scheme. (I’m sorry.)

In the years since Stockholm’s bunnies burst into their freewheeling lifestyles, it has been nothing but crazy Bohemian madness in the forests and public parks. The rabbits have been multiplying like, well, like rabbits.

Today, the fluffy devils are everywhere and they’re huge. “Huge” as in a huge problem and they are large animals. They’re not quite as big as my friend Harvey here – he’s six feet three and a half inches, let’s stick to the facts – but the rabbits in Stockholm are big nonetheless. They’re substantial, strong animals and not at all like the little guys in pet stores that you can hold in one hand.

In an effort to address the problem, the City of Stockholm has employed a crack squad of specially-trained rabbit assassins to hunt down and annihilate these armies of adorable monsters. The city’s War On Bunnies has been a relentless assault spanning many years.

Armed with “special” rifles, according to media reports, a task force is deployed each year to control the population and forcefully implement the Final Furry Solution. Last year in Stockholm’s public parks, more than six thousand rabbits met their makers at the hands of this elite squad of bunny snipers.

You can see part of one of these special guns and the lurking feet of one of Stockholm’s mysterious hit men in this photo on the Aftonbladet site.

So what becomes of all these velveteen cadavers? During the early years of the War On Bunnies, the culled carcasses were simply discarded in landfills. In 2006, however, an EU directive put an end to these heroes’ burials in public dumps. Shortly thereafter, the decision was made to begin using the bodies as biofuel to produce electricity and heat people’s houses.

Awwww… Can you believe it? Even the electricity in Sweden is cute!

Now the world’s cuddliest execution squad collects the hunted corpses and freezes them in cold storage units. Eventually they are shipped en masse to the western Sweden county of Värmland where they become light and heat for electrical customers. Konvex, the company that converts the bunny carcasses into biofuel, does the same with all sorts of other dead animal bodies amassed in the country.

I’m sure you can imagine the reaction of animal rights activists and the sort last week when it was publicized that some of the electricity in is being produced by the burning of bunny rabbits.

Henrik Sundström, chairman of the Swedish Vegetarian Society (Svenska Vegetariska Föreningen) told Aftonbladet, “It’s as bad as eating meat. No, even worse.” He added, “I would not like to live in a place that is heated like this.” Man, is he gonna shit when he finds out that Soylent Green is people!

The considerably less affected Leo Virta, president of Konvex, explained to the Svenska Dagbladet newspaper, “It doesn’t matter to us how the animals die. The difference between a rabbit and a calf is not so great. They’re dead animals. We can’t bury them anymore and so it’s better that they are turned into heat for people.”

Of course, I’m translating all these quotes from the newspapers. These people said all these things in Swedish which made their outrage and defensiveness even more endearing. 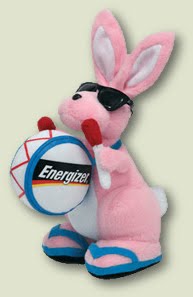 Leif Lundell of Karlskoga Energy and Environment told Svenska Dagbladet, “These bodies can’t be buried, so now we can use them for biofuel instead of burning fossil fuels… They need to go somewhere.”

Truer words have never been spoken. They really do need to go somewhere.

I’ve been vegetarian for almost twenty years but not because of animal rights or anything like that. I just don’t like the idea of putting a body in my mouth. I think that’s pretty gross. However, I’m not too concerned about dead rabbits being the juice that runs my MacBook (better than coal or petroleum, right?) or if my shoes have leather in them. Since I buy a pair of shoes less than once a year, maybe my diet offsets the damage my shoes are doing. The two pairs of shoes I own are both going on two years old. I’m not wearing fur coats or eating at steak buffets every night, you know, like most graphic designers do.

I’m not really sure there is a right answer to these problems. I mean, do you want thousands of giant, non-indigenous rabbits eating everything your city? Of course not, but you dont want snipers hunting rabbits and burning them either. You can’t spay and neuter thousands of animals in the wild, but you have to do something.

Oh well, despite knowing everything and being an authority on most topics, I don’t have the answers to this one.

But as long as we’re burning rabbits for electricity, is there any way the Energizer bunny could be thrown into the fire? Is that too much to ask? I think everyone can agree it’s time for that one to go.