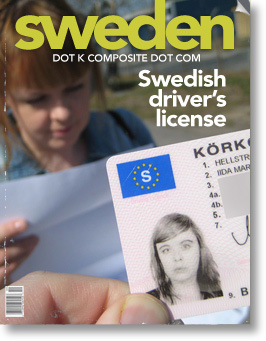 I recently walked with Iida to the local post office to pick up a special delivery. It was her driver’s license.

Getting a license to drive in Kentucky has gotten a little tougher since I first got mine – you have to be doing sufficiently well in school to qualify – but the process still would seem comical to anyone who has done it in Sweden.

I got my first driver’s license when I turned 16. This is the case for most kids in America, except those who live in huge metropolitan areas like New York City where driving isn’t necessary to get around. In a lot of cases, and certainly in mine, getting a driver’s license provides as much freedom for the parents as it does for the new driver. It’s really hard for me to believe that I’ve been driving for over twenty years.

Learning to drive for me was very much the same as learning to ride a bicycle. I think my dad taught me to ride a bike and my mom taught me to drive. That seems about right. My dad was always the one swimming and running around with us while my mom was wearing sunglasses and reading a Robert Ludlum book. I’m kidding, of course, they’re both really active and were always playing tennis and going bowling – you know, the usual hilarious stuff adults did in the ’70s and ’80s.

When I was learning, my mom and I just took the car out in our neighborhood a few times. She drove first, showed me some basic things, and then it was my turn to try it. 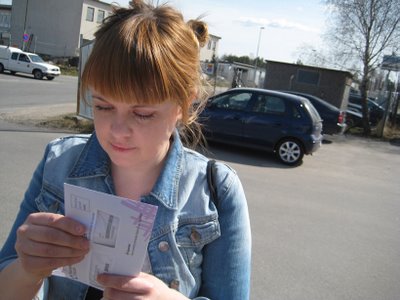 Everything inside the car was was pretty familiar to me by that age because, like I’ve said, in Middle America you’re in a car pretty much every day of your life. I already had sixteen years of seeing how it was done from riding in a car anywhere we would go. Bicycles were used for recreation, and the places we could get to by walking were limited to just neighbor’s houses. All I really had to learn to take the driving test was how to use the clutch. Apart from that, it just takes experience behind the wheel to get a feel for where the car should be on the road and how long it takes to stop. Of course, you have to know the right-of-way rules and that kind of stuff, but whatever, man, this is America, I can do whatever I want!

In Kentucky, at least back then, the process of getting your first license began with going to your local Transportation Cabinet office to get a learner’s permit. This permit was good for 30 days and allowed you to drive a car immediately, as long as there was a licensed driver over 18 in the front seat with you. The office sends you off with a book that has pictures of road signs and basic rules in it. Naturally, there are pictures of menacing Kentucky cops on the cover to scare the shit out of you.

Once you feel like you’ve got it down, you return to the Transportation office. You fill out a form, take a visual test, and do a driving test in a closed course with someone who is probably very old and frightening. For this article, I grabbed a copy of the paperwork from the Kentucky Transportation Cabinet’s website and it is shown here. Seriously, this is it. I noticed in the top corner that it was revised in 2008. Looks great, guys!

The process Iida went through to get her license – and all Swedes must complete – is a study in contrasts to Kentucky. I should say it’s not just Sweden that has a much more demanding gateway to automobile access. It’s like this in most European countries for a variety of reasons which range from public safety to environmental preservation. In neighboring Denmark, sales tax on automobiles is 100%. That is, if you buy a car that costs $20,000, you’ll pay $40,000 for it.

The journey to a driver’s license in Sweden can easily take more a year. Steps in the undertaking require the new driver to attend individual driving lessons from an authorized instructor. These mandatory classes are run by private companies and are not cheap. It would not be unusual if simply learning to drive in Sweden ended up costing you more than $2,000 (16.000 kr). In Kentucky where any licensed driver over 18 (like a friend, parent, or my older brother) could hop in the car next to me before I got a license, just getting one of your parents to teach you during your learning period must be approved in Sweden. That approval process can take up to a month and costs about $125 (1000 sek) per driver.

A typical driving instruction program is comprised of a combination of lectures, books, and in-vehicle instruction. Behind-the-wheel training is extensive. Because Sweden’s weather and daylight hours vary so dramatically, new drivers are obliged to learn and be tested in driving on ice and at night.

When your instructor clears you to proceed to the actual test administered by Vägverket (the government agency that handles licensing), there are more fees waiting for you. The lengthy, official, daytime-only driving test costs almost $100 (700 kr). If you want to drive when it’s dark or after 6 pm on weekends, that’s extra. If you want to drive a truck or a car with a trailer, that’s extra.

Then even charge you for the photo and the manufacture of the license, which I must say, is a pretty substantial card. This thing has about a dozen security features and I can’t imagine how anyone would even begin to try to fake one. The photos here don’t really capture what a piece of artwork and technology the Swedish driver’s license is, but I think they accurately represent how funny my Kentucky one looks. Iida’s photo came out looking only a little bit like Marilyn Manson.

If you fail the test – which is apparently pretty easy to fail – you have to pay the $100 fee again to be re-tested. Iida’s first test was unsuccessful because the guy said she was taking her turns “too fast for the environment.” Well, he said that in Swedish where it’s easier to understand what he meant. I had to ask her to clarify if he meant the environment as in miljö which means “nature” or the environment as in område which means your immediate surroundings. I could see where it would be important to take turns at a speed that respects the neighborhood you’re in, but he really did mean that her turns were too fast for Earth’s ecosystem. That’s certainly something that is not part of the criteria in Kentucky. 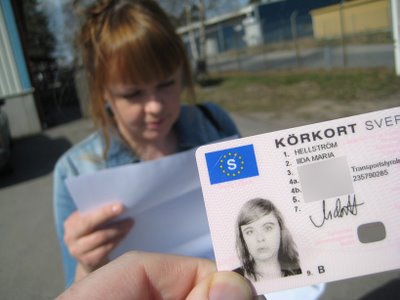 Essentially, it seems they just don’t want people driving cars here. If you must drive, though, they want to be sure you’re safe and you know what you’re doing. I’ve mentioned before that it is strangely uncommon in Sweden to hear someone with an intentionally loud vehicle, hot-rodding, peeling out, or otherwise making a ruckus. The licensing process may be partially to credit for the lower noise level, whereas in Kentucky, any jackass can get a driver’s license. Pass a common-sense test, fork over $12, and drive off the lot. Fill ‘er up at the next corner for $2 a gallon.

Americans love to complain about “high gas prices” as much as their “high taxes.” A 2008 survey of prices from around the world showed that gasoline was more expensive in 107 other countries than in the United States. It’s around $5 a gallon here (10 sek/liter). Two dollars per gallon would be about 4.1 sek per liter.

The real difference is the taxes. In Europe, much of the cost of automobile infrastructure (and sometimes public transit) is included in the cost of gasoline. In America, those enormous costs are shouldered by the general public regardless of whether you drive a car. Since everyone pays, the taxes on gasoline are tiny. Last year when presidential candidate John McCain proposed a summer vacation from the Federal Gas Tax, he was essentially offering 18 cents off the gallon price of gas (38 öre per liter). That’s not even a sale. 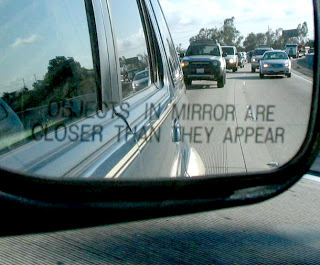 Safety is a big concern in Sweden, but it takes on a decidedly different character here than it does in the United States. It seems to be built into the system here. Volvos, the world’s safest cars, are Swedish.

I’ve learned that fine print and the excessive warning labels in America are very funny to Europeans. Libertarians call this the “nanny culture.” I was on a tour in America in 2001, opening for the band Favez from Switzerland. We crisscrossed the continent and they got a pretty good uncensored view of the country from coast to coast. The thing I remember them being most amused by was the warning on wide-angle mirrors: Objects in mirror are closer than they appear.

If I could go back to the ’80s and see the machine that I took the visual driving test on, I’m sure it would be hysterical. This part of the test was a multiple-choice survey where they would show you a yellow traffic light and it would say, “What does this signal mean?” You could choose from four answers. I presume they administer the test with a computer now, but back in then it was on this bulky, wooden machine that was like a cross between a school filmstrip viewer, a slide projector, and a hearing test machine. The buttons on it were exact replicas of the buttons in the world’s first elevator. Kentucky taxpayers probably shelled out half a million dollars for a room full of these behemoths that had all the modern elegance of a rotary telephone.

I remember the whole testing process taking less than an hour. I missed a few things on both the driving and visual test, but my score was good enough to legally set me loose on America’s roadways. They took my awkward teenage picture and my driver’s license card was produced on the premises. I walked out the door with it and drove home. So long, suckers!

It was nothing but excitement after that. Road trips to Cincinnati to see all the bands that didn’t come to Louisville; going to field hockey games after school; driving to high school instead of carpooling with the neighbors from around the corner; exploring the backroads of Middletown and J-town; getting a job at the ice cream shop in the mall; driving to practice with my synthesizer band Pink Aftershock; meeting new people; you name it. I didn’t start drinking until I was 27, so this was all good, clean fun.

In America the open road and freedom are inseparable ideas. I could be a jaded cynic and say the automobile lobby and advertising have pounded those ideas into our heads, but for me, getting a driver’s license was the beginning of what I remember about my life. Before that happened, there’s not a whole lot I can recall. I remember isolated events – like not letting my mom leave on my first day of school or seeing the Space Shuttle take off when I was 11 – but those are all just blips. After I got my driver’s license, my memories become more of a narrative and I can see the timeline when I think back.

It seems in Sweden the driver’s license is anything but a rite of passage. It truly is a privilege, or even a luxury, to have a car. In Stockholm, aside from the rare occasions when you may need to move furniture or go somewhere far outside the city, having a car would add a lot of expense to your life and I’m not sure it would be worth the hassle.

A couple weeks ago, I actually did have to move some furniture, but I’ll save the tale of that adventure for a future episode.