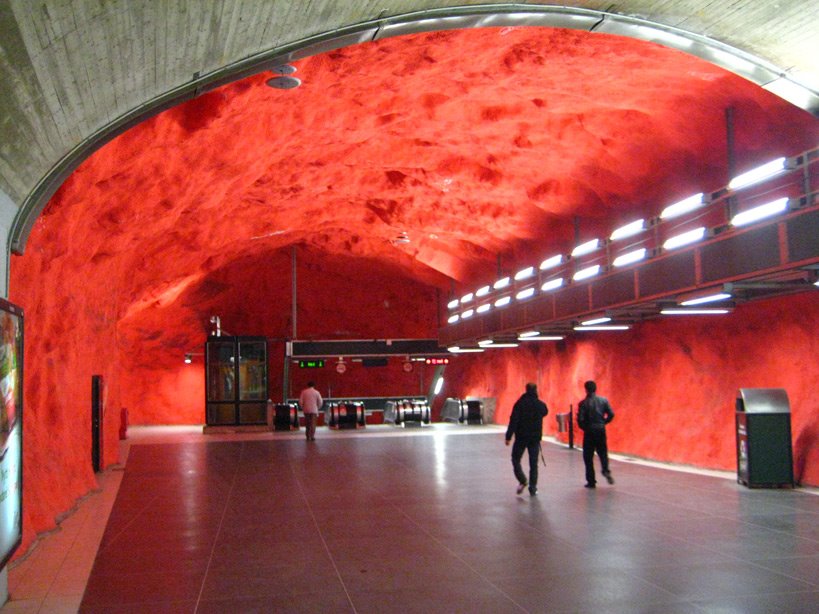 Stockholm’s subway system is not just extensive – 100 stations in a city roughly the size of Louisville – but also quite beautiful. Each Tunnelbana station has been decorated with art and some of the stations themselves were designed by artists. I’m going to continue adding photos of different stations periodically.

This week I bought my summer pass for the transit system, so theoretically I could visit all of the stations. Of course, I haven’t been to all of them yet, but so far, one of my favorite stations is Solna Centrum, just north of the city.

Some of the older stations are dug into the bedrock and have bare, exposed rock walls instead of finished interiors. In the Solna Centrum station, this exposed rock has been painted in a super deep, vivid red. These pictures really just don’t capture how intense the red is or weird it feels to be walking into a tunnel painted this color.

As you go down the escalators, you begin to see that it’s not just entirely red everywhere. What you were seeing is part of an enormous painting and all that red is the sky. Little black silhouettes of houses and a horizon begin popping up around you as you descend.

Once you reach the train tracks, you are surrounded by an endless landscape that stretches all around the bottom level of the station. When you walked into the station above, all the red almost looked demonic, but after seeing the entire picture, it was the top of a sunset.

The landscape includes a spruce forest, lakes, waterfalls, bridges, factories, more little houses, and people. The detail of the artwork has a childlike quality that makes the massive scale of it very tickling.

The panorama runs all around the station and is nearly 1000 meters (3000 feet) long, according to posted information. Solna Centrum station was painted in 1975 by artists Anders Åberg and Karl-Olov Björk.

It says the scene depicts “rural depopulation, the destruction of the environment, forests and nature” which were big issues when the station was built in the 1970s. I guess you could say some things haven’t changed.

In some of these pictures you can see heavy cables and what look like transmitters in the ceiling. These carry 2G and 3G cellular telephone signals. Even deep beneath the bedrock, surrounded by stone walls, your phone works just fine.

Here’s a link to a PDF called Art in the Stockholm Metro if you want to see much more than I can tell you about.