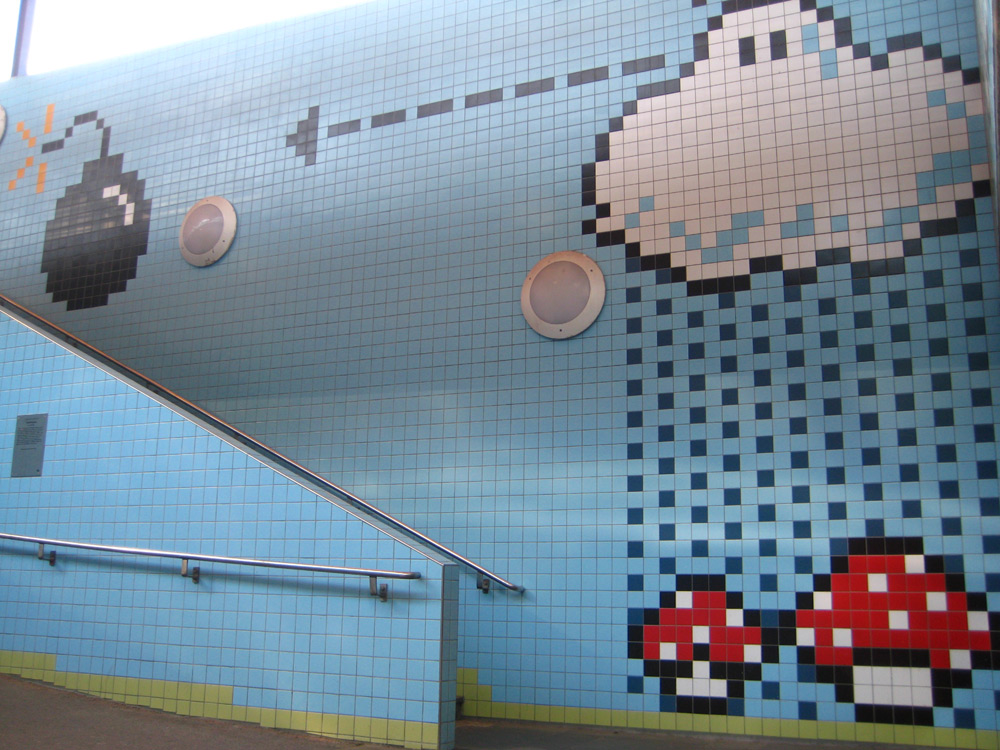 As we’ve learned in several previous stories, Stockholm’s Tunnelbana (subway) system is often called “the world’s longest art exhibition.” Each station has been decorated by a different artist or several artists, and some stations were even designed as walk-through art by architects. This underground art project began in the 1950’s and continues today. 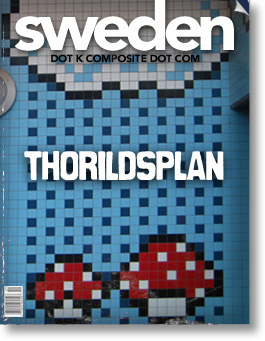 The latest station to receive an artistic makeover is the Green Line platform at Thorildsplan. The station opened in 1952 and was previously decorated. However, in the fall of 2008, the existing art at the station sadly had to be removed because it had been so badly damaged by repeated vandalism.

To replace it and refresh the station, 43-year-old Swedish animator and painter Lars Arrhenius was selected.

Inspired by popular, vintage video games and computers, Arrhenius used the context of the easy-to-clean grid of tiles that traditionally blanket subway stations as an enlarged canvas of gigantic pixels.

I have a feeling that many of my friends who see this will go nuts for what he did with the station. I was certainly dazzled, tickled, amazed and blown away by it. It’s truly jaw-dropping and seemingly unimaginable by American standards of publicly-sanctioned art.

As always, you can click on any image to see it much larger. 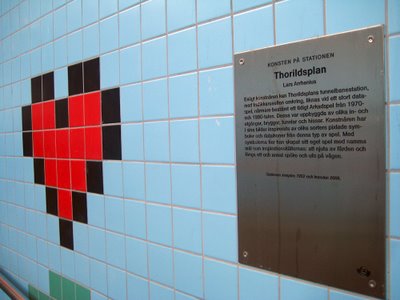 A plaque at each station speaks of the art and artists. This one is near the entrance and greets you as you’re walking in from the street.

It says the artist wanted to make the station, like a large computer game, specifically the early arcade games of the 1970’s and 1980’s. Like in these old games, the moving trains are like traffic around the carousel and are constructed of different entrances and exits, bridges, tunnels and elevators.

He has been inspired by different kinds of pixels, symbols and data icons from these types of games. With all these symbols, he created his own game with the same objectives as the sources that inspired him: enjoy the journey and capture a ghost and UFO along the way. 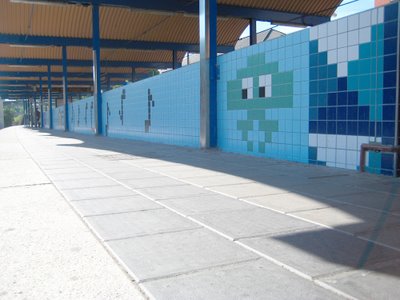 If you’re arriving from another station and getting off the train at Thorildsplan, the wall surrounding the ramp and stairs that descends to street level is your introduction to the artwork. A long scene that wraps around this short wall is inspired by Space Invaders… 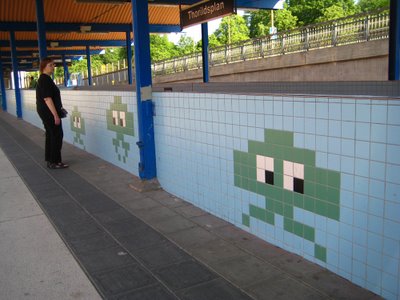 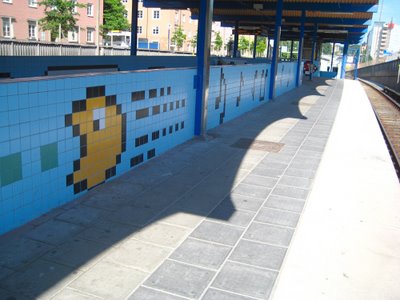 …and Pac Man wraps around the stairs. 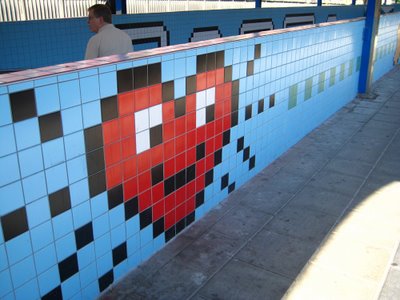 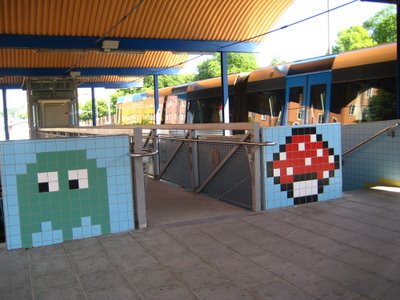 As artist Lars Arrhenius said in his statement, just like a subway station, old video games are filled with elevators, ramps, stairs and moving vehicles. It’s quite exciting how he has brought the two together.

As you walk around the short wall to get approach the stairs, a bridge to the elevator is sandwiched with a ghost from Pac Man and a mushroom, which I’d like to think is from Centipede but is probably more of the Super Mario Bros. variety. Swedes know more about mushrooms than I do. 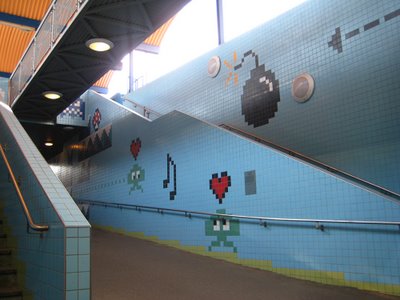 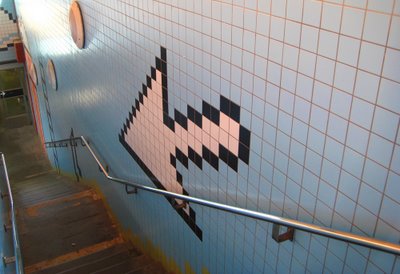 Pointing the way down the stairs is an early Microsoft Windows-style arrow. 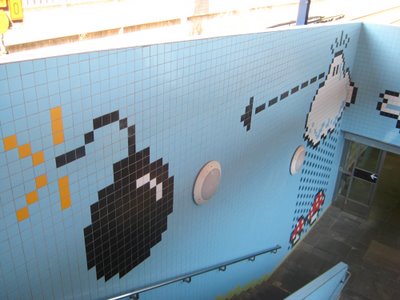 On the wall opposite the Windows arrow is the bomb that would appear when your vintage Macintosh produced a system error. It’s true, kids, old Macs used to completely crash. However nostalgic I may be, I don’t miss seeing that old guy in the middle of my work, but it did get me in the habit of hitting Command-S to save all the time. 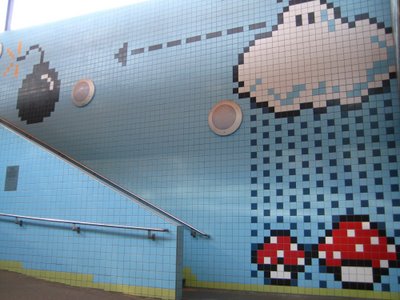 To the right of the Mac bomb are rain clouds and more mushrooms from Super Mario on Nintendo. 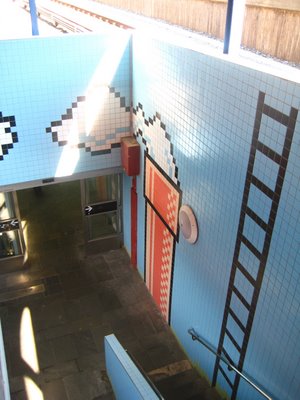 Clouds connect between the opposing walls, revealing a Super Mario smoke stack. A ladder next to them could be from any game, I’ll pick Donkey Kong. 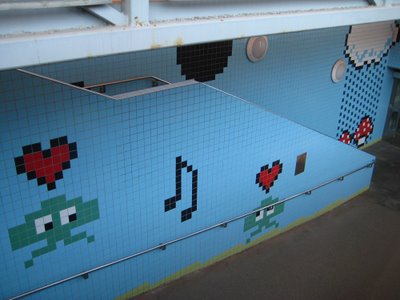 More Space Invaders on the outside of the stairs. 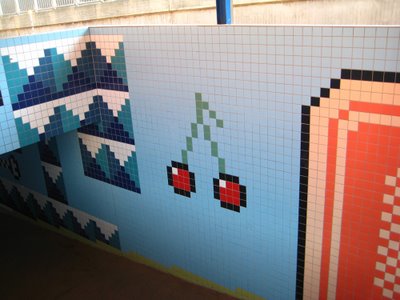 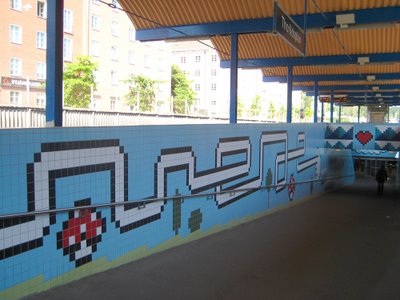 A long ramp cuts through the middle of the platform and this side is covered in tunnels reminiscent of Dig Dug. 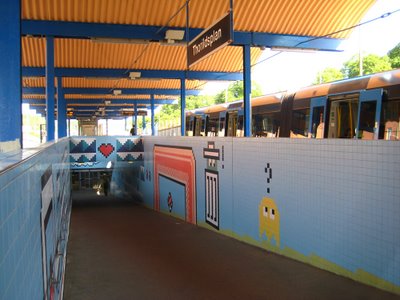 Opposite from Dig Dug is an old Macintosh trash can, last seen in System 6, complete with Oscar the Grouch inside. I don’t know if it was an Easter egg put into the system by Apple programmers or if it was a thrid-party add-on, but I remember some very old Macs used to have Oscar in the trash can. He would sing a line of “I Love Trash” when you emptied it. 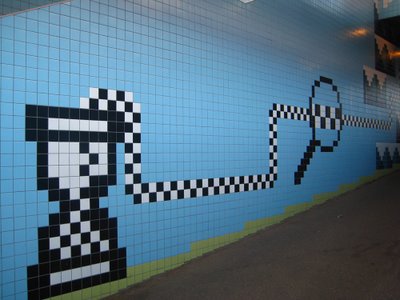 Here we see more Windows-inspired icons, the unforgettable hourglass and the magnifying glass. 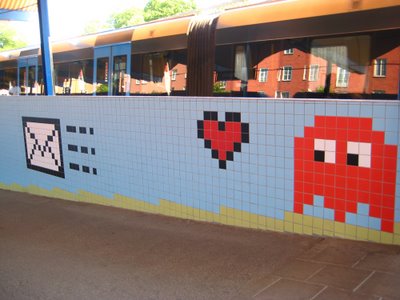 E-mail? That seems kind of futuristic, but Blinky seems to love it. (FYI: I didn’t really know what the red ghost from Pac Man was called. I had to Google it.) 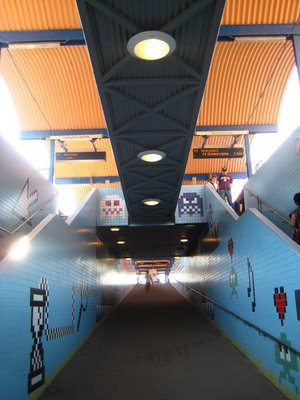 A bridge from underneath showing more of the marriage between video game aesthetics and subway architecture. 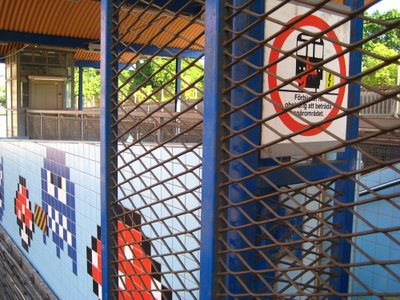 One interesting characteristic of the all-over art at this station is that it even wraps around the outside of the structure. This photo and the one below are parts of the station you would only see if you jumped onto the tracks or lived on an upper floor of the apartment house across the street. You can catch a glimpse of this for just a second if you’re inside the train when it is passing through. I wanted to see it, but I didn’t think it was worth an arm, so I waited until just after the train left to hold my camera out around a barricade to get these shots. 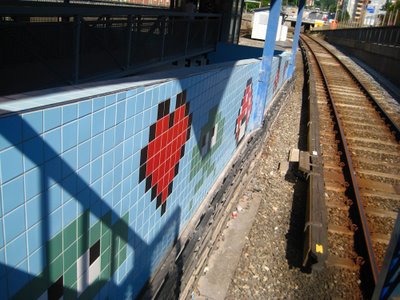 What I really love about the art at Thorildsplan is that we usually think of video games and computer systems as disposable. The iconography and graphics employed here have undoubtedly become a part of our everyday lives, but any game or operating system really only lasts a few years in general use.

Some of these classic icons from wildly popular video games bring back the same kinds of memories for us that songs and movies do, but only if you’re old enough to recognize them and young enough to remember how they affected you.

By embedding this imagery into a permanent structure, it becomes official. The bomb from the old Macintosh operating system or the ghost from Pac Man are not just memories or blips on screens anymore. They are a part of history.

The art at this station may be “cool” or “campy” right now, but when visitors pass through here in forty years, they will look at the displays in a much different way than we do. It may not tickle or thrill them the way it does for me. They may simply see it the way we see a tribute to old black and white movies. That’s just the way things were.

Note: Though it is too old to include the new art at Thorildsplan, there is a downloadable PDF booklet in English about art in the Tunnelbana system at this link on the Stockholms Lokaltrafik website.